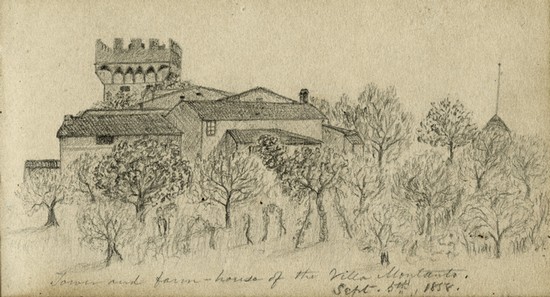 Sketch of the Villa Montauto by Ada Shepard, 1858 September 5

The finding aid also includes a subject index of Shepard's letters, a guide to topics mentioned by Shepard in her letters from 1857-1859.

From the fall of 1857 to the summer of 1859, Ann Adeline Shepard (1835-1874), known as Ada, served as the governess to the three children of Nathaniel and Sophia Hawthorne while traveling through England, France, Italy, and Switzerland with the Hawthorne family.

Born 1835 May 4 in Dorchester, Massachusetts to Ann and Otis Shepard, Ann Adeline Shepard, known as Ada, was the sixth of nine children. She earned high marks while educated at the Normal School in West Newton, Massachusetts and as a student in the first class of Antioch College in Yellow Springs, Ohio, where she graduated in 1857. She also met her fiancé Henry Clay Badger (known as Clay) at Antioch. The two were engaged at Antioch and remained engaged and in contact throughout Shepard's travels through Europe with the Hawthornes.

By July 1857, the Hawthornes and the Manns (Mary Tyler Peabody Mann, sister of Sophia Hawthorne, and her husband Horace Mann, president of Antioch College),determined that Shepard would travel to Europe to act as a governess for the Hawthorne children and to deepen her study of languages in preparation for a professorship in the languages at Antioch College.

Shepard spent two years with the Hawthornes, traveling with them in France, England, Italy and Switzerland, and staying in major cities like Paris, London, Rome, Florence, Siena and Geneva. Throughout, Shepard acted as governess and translator. She also spent the winter of 1858 into 1859 tutoring the children of American and British families staying in Rome, a concession made by the Hawthornes following the extension of her stay into 1859. Throughout her travels, she wrote to Clay Badger, her family, and her friends.

Shepard, along with Sophia Hawthorne and the Hawthorne children, took up sketching to capture the scenes and artwork they viewed as they traveled. Shepard's hobby eventually caught the attention of artist Cephas Giovanni Thompson, who had at least one training session with her during her stay in Rome.

Shepard was also with the Hawthornes when Nathaniel Hawthorne began his final novel, The Marble Faun. It is an (often-refuted) theory that the novel's character of Hilda was modeled after her.

Following her return to the United States, Shepard married Clay Badger in 1859 August. She returned briefly to Antioch College to teach as a Professor of Modern Languages and Literature, and then settled in Cambridge and Boston. Shepard and Clay Badger had four children, Theodore Badger, Frederick Badger, Ernest Badger, and Katharine Badger. Shepard continued her work in education, opening a girls' school in Boston in 1867, and she became one of the first women to be elected to the Boston School Committee in 1873. The following year, Shepard ended her own life.

Throughout her letters, Shepard wrote often about interactions with people close to herself and the Hawthorne family. The people she mentions most frequently are listed below, along with a brief note regarding the nature of her contact with them.

People mentioned frequently in the letters of Ada Shepard:

Pope, Charles Henry. A History of the Dorchester Pope Family. 1634-1888: With Sketches of Other Popes in England and America, and Notes Upon Several Intermarrying Families. The author, 1888.

SCOPE AND CONTENT:  The collection consists of 4 sketchbooks and 152 letters composed during Ada Shepard's employment as a governess for the Hawthorne family during their travels through Europe from 1857 June - 1857 July. The sketchbooks document their journey, including sketches of people who may be members of the Hawthorne family, sketches of places the family visited, works of art viewed by Shepard and the family, and sketches of people the family encountered (often unnamed). The letters provide further details of the trip as well as Shepard's feelings about the family, the journey, and their surroundings. Details regarding content are included in the descriptions of series, subseries and folders.

The collection also includes a copy of the typed transcripts from the Norman Holmes Pearson Papers, Yale Collection of American Literature at the Beinecke Rare Book and Manuscript Library and the notes on the organization of the letters while at Yale University. The level of transcription varies, but is mostly word-for-word.

PROVENANCE: Ada Shepard's papers were passed to her son, Frederick Badger, who loaned them to Norman Holmes Pearson at Yale University, where a transcript was made. Later, Pearson returned the papers, and they were inherited by Susan Abele, Ada Shepard's great-grand neice.

PUBLICATIONS BASED ON USE OF RECORDS:

Back to the Selected Finding Aids Page