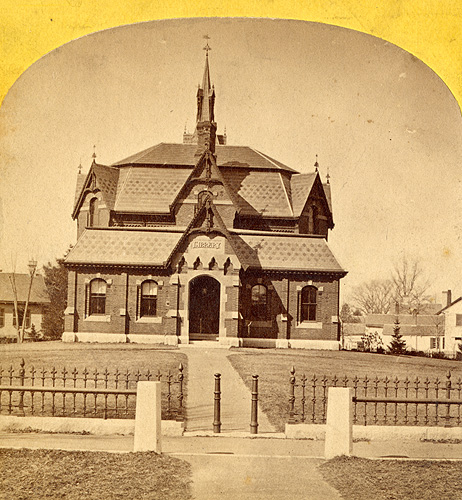 The citizens of Concord and their guests dedicated the Concord Free Public Library on Wednesday, October 1, 1873. Located at the intersection of Main Street and Sudbury Road (the present 129 Main Street), the library was founded through the generosity and vision of William Munroe, a Concord native who made a fortune in dry goods and textiles and after retirement developed a desire to use his accumulated wealth to benefit the town where he had been born and raised. Munroe provided funds to construct the library building and masterminded the details of construction and operation. The institution he established - an amalgam of public and private funding and management - has ever since met the reading and information needs of local residents and visitors to Concord and served as a cornerstone of community life.

William Munroe initially thought to provide in his will for the Concord Town Library - Concord’s first public library, established in accordance with newly-passed Massachusetts public library legislation in 1851. But the entirely tax-supported Town Library was a modest operation - at its largest it consisted of 7,000 volumes - and it did not have a building of its own. As time passed, Munroe came to feel that Concord, with its rich historical and literary heritage, deserved something better - a library that would truly reflect the culture and significance of the town.

Aware that the project he envisioned was too big to take on by himself, Munroe understood that he needed personal, financial, and political allies to make the library a reality and to give items from their personal collections to build it up. He enlisted the support of a number of Concord’s leading citizens - men who were involved in town politics, who loved Concord, and who were willing to contribute to the library financially and in other ways. He cultivated Ebenezer Rockwood Hoar, George Merrick Brooks, Henry Francis Smith, Reuben Rice, and others, who subsequently became members of the Concord Free Public Library’s Corporation or of its Library Committee.

Munroe devoted much effort to planning a form of management that would ensure the viability and long-term growth of his library. He was directly responsible for setting up the administrative structure by which the Concord Free Public Library is still governed today. The library is supported by a combination of public and private funding and governed through the mutual efforts of a nonprofit corporation and a municipal library committee. The Corporation (Board of Trustees) owns and presides over the library buildings (129 Main Street and the Fowler Library in West Concord) and the endowed funds that provide for them, and holds and maintains valuable manuscripts, archival records, books, photographs, artwork, some artifacts, and similar materials (what we now know as Special Collections). Because the Corporation owns the library buildings, it raises private funds as necessary for maintenance, expansion, and renovation. The town’s Library Committee presides over the staff and the expenditure of municipal funding. Both town and trustees contribute to the purchase of books for the circulating and reference collections.

Private ownership for public access was intended to facilitate the collecting and long-term protection of Concord’s documentary heritage. Munroe envisioned his library as a comprehensive repository for Concord-related materials before there was yet any other local institution devoted to this purpose. Concord’s manuscripts, archival records, locally significant books, ephemera, and works of art - now recognized as part of national as well as of local heritage - are not subject to the political and fiscal pressures that sometimes influence library decisions in purely municipal situations elsewhere.

William Munroe also knew that it was necessary to work within existing political structures - Concord town meeting, Middlesex County government, and the state legislature. He and his cohorts obtained approval for their plans at town meeting. They arranged for certain road improvements connected with the project - in particular, the widening of Main Street from the corner of Walden Street west to the library site - through the Middlesex County Highway Commissioners. And they formalized the public/private management of the new library by submitting an act of incorporation to the Massachusetts legislature for approval.

Munroe bought the major part of what would become the library lot from George Brooks in 1869. The house which then stood on the site (moved in 1872 to permit library construction) had been a prominent feature of Concord’s landscape for more than one hundred and thirty years. It was completely in keeping with the other white-painted New England style wooden houses in the neighborhood. The library erected on the site of the Brooks House was very different in style from any other Concord building at the time. William Munroe wanted a distinctive and impressive as well as a functional structure, and didn’t feel compelled to conform to a locally familiar style of architecture. Having solicited plans from several professionally respected architects, he chose the Boston firm of Snell and Gregerson to design the library.

It’s impossible to look at early photographs of the newly constructed Concord Free Public Library without realizing what an architectural novelty it must have seemed in 1873. Concord was, after all, still a primarily agricultural town with a population of not much more than 2,500 people and a pronounced local preference for traditional New England simplicity. The Massachusetts Reformatory - Concord’s other prominent Victorian brick building of the 1870s - was several years away from being built. William Munroe’s Victorian Gothic library building was, in fact, exotic, and drew attention.

Although it took some in town a little time to get used to Concord’s Gothic library, the opening of the new building and the expansion of collections and services that followed generated an enormous swell of community pride and support. Ralph Waldo Emerson himself delivered the keynote address at the library’s dedication on October 1, 1873, and served on its Library Committee. Throughout the 1870s, many Concordians and others gave freely from their personal collections to enrich the fledgling institution. By 1880, when George Bradford Bartlett’s Concord Guide Book was published, the Concord Free Public Library had become a local landmark and a must-see for visitors to the town, a recognized temple of New England culture.

Splendid and spacious though the new library was, even William Munroe realized that it would not remain forever sufficient for the needs of a vigorous and growing town. Before he died, he made provisions for its eventual enlargement. In 1875, he had Snell and Gregerson draw up plans for extension. These plans called for two new wings off the rear of the building, one an enlargement of the circulating library area, one an art museum. (The spired tower was to be preserved.) Munroe summoned the Corporation and Library Committee to a joint meeting on September 10, 1875. He presented the plans and turned them over to the Corporation for future reference. He died a year and a half later. In drawing up his will, Munroe acknowledged that “another half century of prosperity in New England” would necessitate expansion, and provided financially for the eventuality. Others augmented the building fund that Munroe had established.

Although the library has not grown exactly as its founder proposed, it has undergone multiple additions and renovations over the years. It was altered in 1889 (when a school building from Sudbury Road was annexed to the back); in 1917 (when the tower came down to permit the construction of stacks); in the early 1930s (a renovation by Frohman, Robb & Little, who both enlarged the building and radically changed the style of its exterior from Victorian Gothic to Georgian); in 1938; 1968; 1986 to 1990 (a renovation designed by Perry, Dean, Stahl, and Rogers); and most recently from 2003 to 2005 (under J. Stewart Roberts & Associates) - a largely systems-driven project that modernized and restored elegance to 129 Main Street. In addition, a separate facility for the West Concord Branch was dedicated in 1930.

As its building has grown and evolved over the years, Concord’s library has changed in other ways, too. The collections and the staff size are now approximately twenty-five times what they were when it first opened in 1873. Separate departments have evolved to handle administration, technical services, reference services, the particular needs of the children and young people of the town, and the research demands of those who seek information on Concord history, life, landscape, literature, and people. Automation and the Web have radically changed the way the staff functions and information is accessed.

And yet, even as the library has changed, there has been a continuing recommitment to the high standards of its founder and the idealistic aims that informed its establishment.