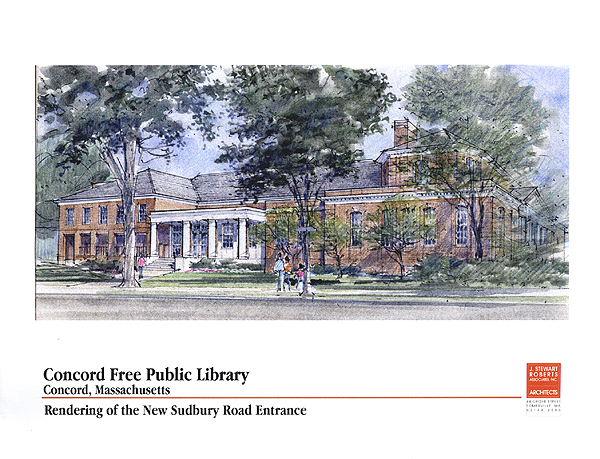 At the turn of the twenty-first century, more than one hundred and twenty-five years after the establishment of the Concord Free Public Library, library collections were actively growing and patron use was on the increase. But the building's heating, air circulation, electrical, mechanical, and plumbing systems were outdated and inefficient, and staff working areas in the basement and elsewhere were cramped. Parts of the library were always uncomfortably hot in the summer and cold in the winter. Consequently, the Corporation initiated what turned out to be a highly successful capital campaign for renovations to remedy these problems, and hired the architectural firm of J. Stewart Roberts & Associates to oversee the project. This elevation shows the architects' planned alterations to the Sudbury Road side of the library building.

Between 2003 and 2005, integrated systems, air conditioning, new elevators, a variety of safety features, and wireless Internet access were installed, and the building brought up to code. The charging and work areas for Circulation were revamped, the Special Collections reading room significantly expanded and tastefully appointed, and new periodical and young adult areas created. Great care was exercised through all of this to protect and showcase the remaining architectural features of the original library building (the octagonal lobby) and of the renovation of the 1930s (the Reference, Trustees', and Thoreau Rooms).

The pervasiveness and invasiveness of this renovation required closing the main library for ten months. Patron service continued at the Fowler Branch, where Special Collections holdings and staff were temporarily relocated. Administration, Development, and Technical Services operated out of the former Agricultural Extension building on Everett Street.

In 1873, satisfied that the final result was sufficient testimony to his efforts, William Munroe did not feel it necessary to put his name on the library he had built. The transformation of the library during the renovation of 2003 to 2005, however, provided an appropriate way to honor the library's founder, in whose memory the William Munroe Special Collections facilities were dedicated early in 2005. Formal reopening ceremonies for the library as a whole were held in May of that year.