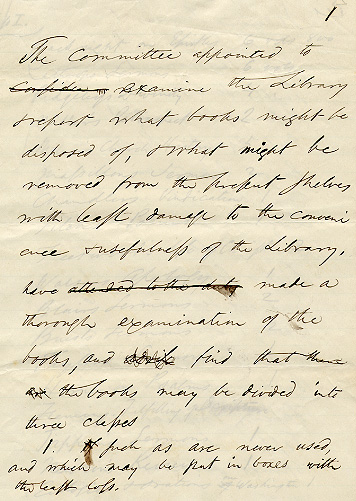 William Munroe's 1873 gift to Concord of a new public library formed part of a long history of libraries in the town. At the Concord Free Public Library dedication on October 1, 1873, Ebenezer Rockwood Hoar referred to a 1672 order to the selectmen of Concord "That care be taken of the Books of Marters and other bookes, that belong to the Towne, that they be kept from abusive usage, and not be lent more than one month at one time." These words have often been repeated in support of the local claim that Concord's public library history began in the seventeenth century. Be that as it may, library history in Concord from the late eighteenth century to the present time is remarkably well-documented. Surviving records of private and public library operations reveal a strong sense in Concord of the importance of books and reading.

Formed on May 25, 1795, Concord's Charitable Library Society maintained a subscription library (a private collection supported by membership fees, supplemented by voluntary donations of books and funds). Membership-based though it was, it also had an added, constitutionally-specified benevolent function - it allowed non-member citizens of Concord to use its collection. The Reverend Ezra Ripley, long-time minister of the First Parish in Concord, served repeatedly as an officer. (The constitution and some of the records are in his hand.) Although not listed in the records as members, women did, in fact, donate books to and borrow them from the society's collection.

In 1821, the membership and book collection of the Charitable Library Society were absorbed into the newly-established Concord Social Library, a proprietary library. Proprietary libraries - libraries owned jointly and used by shareholders - served the reading needs of many New England towns before the public library movement gathered momentum in the nineteenth century. Bookseller and stationer John Stacy was librarian for the Social Library, which was housed in Stacy's store on the Mill Dam. (Much of the collection was purchased through Stacy.) Ralph Waldo Emerson was a member and a one-term president of the Standing Committee. The January 6, 1851 manuscript Standing Committee report (here shown) is in Emerson's hand.

At a meeting on October 11, 1851, the proprietors of the Concord Social Library voted "To give the Library to the town on condition they shall establish a public library on the plan contemplated by the Act passed May 24, 1851, entitled "An Act to authorize [Massachusetts] cities and towns to establish and maintain public libraries.'" At town meeting on November 10, 1851, Concord approved the establishment of the Concord Town Library, its first public library. Never housed in a separate building, the Town Library collection was kept in the Court House and the Town House on Monument Square. Charles Hosmer Walcott and Ephraim Bull, Jr. were among its librarians, Ralph Waldo Emerson a member of its Library Committee. The first annual report of the Town Library Committee appeared in the printed Concord town report for 1852-1853.

The Town Library collection began with a nucleus of about 1,300 volumes from the Concord Social Library. At the time of its 1873 closing in preparation for transfer to the Concord Free Public Library, it consisted of nearly 7,000 volumes.