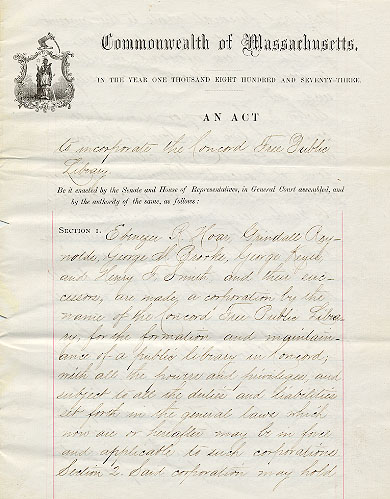 The public/private management of the Concord Free Public Library was established through an act of incorporation approved by the Massachusetts Legislature on March 24, 1873. The act of incorporation granted the self-perpetuating Board of Trustees the power to hold real and personal property in addition to "books and objects of curiosity and art," set the number of members at five (since increased to nine), and spelled out the procedures for filling vacancies and, when necessary, removing members. It also specified that the town would pay the salaries of a librarian and support staff and would transfer all funds held for public library maintenance to the Corporation.

The first meeting of the newly-formed Corporation took place on March 28, 1873, at the home of Ebenezer Rockwood Hoar. All of the first trustees - Hoar, George Merrick Brooks, Grindall Reynolds, George Keyes, and Henry F. Smith - were present.

At town meeting on March 31, 1873, Concordians voted to convey the existing Concord Town Library collection and the funds for its maintenance to the Corporation, and directed the Library Committee to accomplish the transfer. The raising and appropriation of the librarian's salary was also approved. The consent of the Library Committee would be required should the Corporation seek to restrict access to materials "to a greater degree than has heretofore existed." The Library Committee would control the expenditure of the annual town appropriation for the library and the income of municipal funds. The formal document of conveyance was signed on May 1, 1873.

William Munroe had carefully planned the collaboration between trustees, town committee (which, when the library opened, consisted of Ralph Waldo Emerson, Frederic Hudson, Reuben N. Rice, Albert Tolman, Edward Carver Damon, and George A. King) and professional staff (in 1873, first librarian Ellen Frances Whitney) for the effective management of his library. The original Corporation and Library Committee members shared Munroe's sense of the type of institution the Concord Free Public Library should be. The longevity of their service and that of their successors helped to ensure the survival of Munroe's vision into the twentieth century.