COMPREHENSIVE INDEX TO THE SEVEN VOLUMES OF

MEMOIRS OF MEMBERS OF THE SOCIAL CIRCLE IN CONCORD 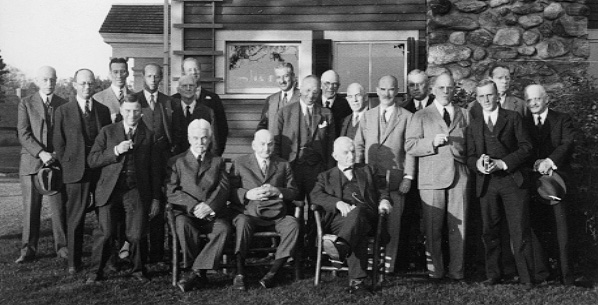 The Social Circle in Concord at Raymond Emerson's, May 1937.   From the CFPL Photofile.
Image not to be reproduced without permission of the Concord Free Public Library

The Social Circle in Concord is a private men’s organization in Concord, Massachusetts.  Formed in 1794, it was preceded by two earlier versions, the first dating back to 1782, possibly before.  Limited by constitution to a membership of not more than twenty-five, the Circle’s original stated purpose was “To strengthen the Social affections and disseminate useful communications among its members.”  Membership is by invitation and from the beginning has included men active in local politics and influential in various spheres in Concord and beyond.  Meetings are devoted to conversation and held at members’ homes.

From time to time, the Circle publishes compilations of biographies of members who have died.  These biographies—for the most part written by other Social Circle members—are issued under the title Memoirs of Members of the Social Circle in Concord (seven volumes published as of 2010).  They are valuable for research on many Concord-related subjects.

The seven volumes issued to date are:

All seven volumes of published Social Circle memoirs are available in both the circulating collection and the William Munroe Special Collections of the Concord Free Public.  Check the Minuteman Library Network catalog for the call number and availability of circulating copies.

Please click this link to access the finding aid for Social Circle in Concord records held by the Concord Free Public Library.

This index to the seven published volumes of  Social Circle memoirs was prepared for the CFPL Special Collections by Sarah Chapin.