Frances Walker tells about her work with the Red Cross.

My uniform is my badge that tells I did a little bit during World War II. I was asked to be chairman of the volunteer services which entailed being over all the committees that worked for the Red Cross during the war. Those were very busy days for us. We had the canteen, the grey ladies, and the blood bank. This entailed going to all the meetings of the service chairmen all around Massachusetts and monthly meetings at the hospital in Ayer. It meant keeping a hand on everything, and it was constantly trying to solicit people to do these jobs.

After the war, all these committees were still under the Red Cross but they didn't need a volunteer chairman any more so my job by that time was over.

The next thing I did was to work for the auxiliary for the hospital. A very good friend and I worked hard together. We felt we should have a definite auxiliary organization with dues and different committees. We went around to meetings of other auxiliaries to see how they did things. We built up quite a good membership starting from nothing.

I was the first president of the Concord auxiliary and then of all the auxiliaries. We had an annual meeting with each chairman reporting. It was most interesting to see how the enthusiasm grew and the contributions grew, and now it is a very flourishing organization.

We worked very hard to get such things as the coffee shop at the hospital. The hospital board didn't go along with the idea at all. They didn't want to give us the room or contribute to it. Finally when they saw the necessity of it, they asked the auxiliary to take it over. For a long time it was run entirely by volunteers and now they have some paid employees. It was the same with the gift shop.

I wanted very much to have a place out here where people could give blood. I got permission from the Unitarian Church to let us have the blood bank there, and we had it there for years and years.

And, we formed the grey ladies and nurses aides. I was always there but I didn't have anything special to do with it. I saw that it ran all right.

I got finished with my job with the auxiliary about 1950. I worked very hard for the hospital and I continued as a volunteer after my presidency of the auxiliary.

Mr. Walker was very active in the study group which proposed the town manager form of government that subsequently went into effect in 1955.

I was asked to be chairman of a committee to look into the possibility of having a town manager form of government for Concord. At that time Concord was growing and was a well managed town. But the selectmen were busy with their own affairs and could only meet in the evenings, so there wasn't anybody on the job day-to-day managing the affairs of the town. So my committee of three met and discussed the matter, and it was our conclusion that Concord was getting big enough so that a town manager form of government would be appropriate and would help and improve the administration of the town.

The next step was to get copies of the charters of the other towns using that form of government, study them, and develop one that would be suitable for Concord. With that work I had quite a lot of help from Frank Johnson and John Flynn. But when it came to the writing and forming of the charter, Dan Cummings and Bert Newbury and I worked together.

The charter then had to be voted on at the town meeting. There was a good deal of opposition and a great deal of discussion. We had had a number of debates prior to the vote. The first vote was defeated. A small majority decided they did not want change; it was not the way Concord had always been run. After a year went by, I wrote a small pamphlet explaining why the town manager form of government would be advantageous for Concord, and it was mailed to all citizens.

Walker We had another vote, and it was voted down the second time. So the third year after many many meetings and debates, it was finally approved and adopted. It was put into effect and it was twelve years after that before anyone suggested any change to the original charter we had worked out. And, there have only been two or three managers since then.

We have been very fortunate in the town managers we have been able to employ. They have had good support from the citizens of the town. The selectmen continue to determine policy and make certain appointments. The town manager according to the charter makes other appointments. The system has seemed to work very well indeed, and I don't think there has been anybody anywhere suggest that we go back to the old system.

In the fifty years we have been here I don't think there has been a great deal of change in the main areas, such as on the main roads and highways. The development has been more on the off streets. The population has doubled in those fifty years, and the traffic has become very intense indeed. I think Concord has been bettered but not changed too much.

Concord has more organizations than any other town its size, and that's because of many interesting citizens with different talents and capabilities. There is a great variety of activity; musical, artistic, medical.

I was a member of the Concord Players for many years and president of the group prior to the war. The productions were more local and I don't think quite as professional as they are today. 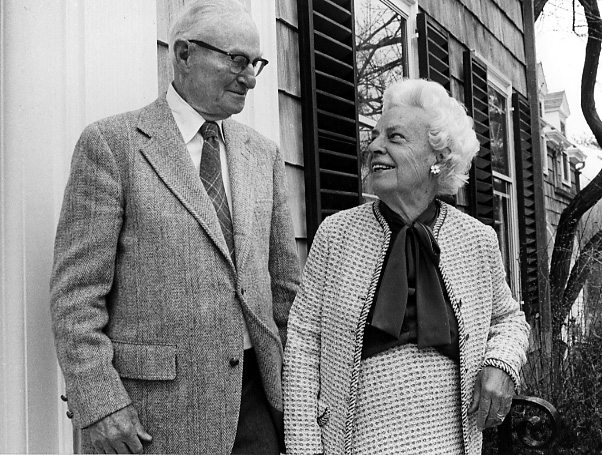