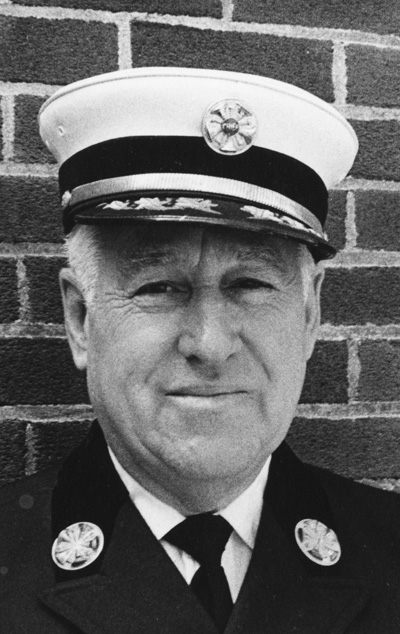 Thomas Torabeno joined the Concord Fire Department in 1935 and retired as its chief in 1974. His tape reveals the changes in the way fires were fought over the course of these 39 years, with some background information on the history of the fire department in Concord.

When I joined the Concord Fire Department in 1935, the only men were drivers for the apparatus. It is ironical but that is the same situation today, all they have today are drivers. Although the department has grown from the six men when I joined the department to the thirty-three men today, because of shorter hours, they are still only drivers.

There were three men assigned to station 1 in Concord Center and two assigned to station 2 in West Concord and one string man who filled in for whatever man had a day off and needed a station. Of course, the last man hired always got the string assignment.

We were really dependent on our call force. The force was made up of men who lived and worked in the town and could respond when the fire whistle sounded. There were 15 call members assigned to each station. They received a flat rate of $50 per year plus 50 cents per hour for fighting industrial or grass fires. However, if they failed to respond to an alarm, they were fined 50 cents. The call members came and drilled one night a month from 7:00 - 10:00 p.m. during the months of June, July, August and September. A drill master from the Arlington Fire Department was hired for this service.

When an alarm of a fire was received at station 1, we used to have to make what we called the circuit to pick up the call members. We had an old American La France combination that was converted to a brush fire truck by installing a 275 gallon oil tank in the body and filling it with water. A small piston pump was installed on the back step of the truck, and the pump suction hose was placed in a hole in the top of the tank of water. The pump was very temperamental and could kick like a mule when you cranked it. A broken arm or wrist was not uncommon. This apparatus made the circuit to pick up the call members.

Fire fighting at that time was just beginning to improve. When I was chief, I was one of the charter members who founded the Fire Training Academy in Framingham. That one room organization has grown to be one of the best fire training academies, and every fireman in the state who is appointed to a fire department must attend a six-week recoup course on the fundamentals.

The central station in Concord Center was located on Walden Street where Healy's Package Store is now located. Fire fighter James Myette has the old sign in his garage that hung in the station before the station was sold at auction to Tom Healy.

The first chief I remember was a gentleman named Silas Bean. He was a call chief and worked at the blueine factory in West Concord. That factory later became the Dover Ski Binding and is now owned by Bob Steinmann's printing company.

The first permanent chief of the Concord Fire Department was Harry Rider in 1933. The second chief was Harry Tuttle in 1935, who appointed me to the department. The third chief was a great friend and did much to help me with my career in the fire service. His name was Harry Patterson and he was appointed in 1955. I became chief when Harry retired in 1959.

Before the department became motorized, the apparatus was horse drawn. The horses were kept only one night in the station on Walden Street, and then it was decided that it would be better to keep them across the street at Tuttle's Livery Stable. When an alarm was sounded, the handlers at the stable would run the horses across the street, hoist them onto the hanging harnesses, drop it on them, make up the snaps, and they were ready to respond to the fire. The apparatus consisted of a horse-drawn ladder and a horse-drawn hand tub. A hand tub was used to pump water from a well or a brook, pond, or lake. Members of the department would man the brakes, which were the long handles along-side the tub. You usually had eight to ten men on each set of pump handles, and the harder and faster they pumped, the greater was the hose-line pressure and the farther they could throw water. It was very rugged work.

In 1910, the town purchased the first motorized apparatus, two Knox pumpers, one for Concord Center and one for West Concord. These trucks were built in Waltham and named for the man who designed them. I was photographed in one of them at the central station but I can only identify two men in the picture. One is Sam Tuttle and the other is Martin Finegan in the driver's seat. Martin, at that time, ran a clothing store where the toy shop is now located on Walden Street.

In 1914, the first permanent fireman was hired. He was Roy Bass and hired at a salary of $590 a year. The substitute for his one day off each week was Martin Finegan.

When the first firefighting society was formed in 1792, all a man needed was a strong back and a big leather bucket. The first engine company was formed here in 1841 and for many years all water was pumped by hand. In Independence Court where the Cat's Eye is now located is where the tub, Independence, was kept. I was able to resurrect the old sign that hung over the door, and it is now on the wall of the headquarters station on Walden Street.

In 1972, our fire apparatus consisted of one 1959 Mack pumper, one 1957 Mack pumper, one 1962 International pumper, one 1950 Mack 65-foot aerial ladder truck, one 1968 chief's station wagon, one 1966 DMC rescue truck, one 1968 Kaiser jeep, one 1963 Mack high pressure wagon with foam tank, one 1970 Cadillac ambulance fully equipped, one 1947 International forest fire wagon, an aluminum sled boat with outboard motor and trailer, and one 1971 American La France aerochief platform truck with built-in water gun that would extend 85 feet. This is the most modern piece of equipment available to fire services today.

The uses of the most important apparatus today are as follows:

1. The pumper is used to take water from a hydrant, brook, lake, pond, or well and deliver the water through hose lines to the fire at whatever pressure and volume the pumper is rated for.

2. The ladder truck is used to carry all different lengths of ladders, all kinds of forcible entry tools, air packs, blankets, life jackets, a stretcher, and a good first aid kit.

4. An aerial platform carries about the same compliment of ground ladders as a ladder truck and all the same equipment. The major difference is that it is a mechanically operated, elevated platform that can extend from the ground to a height of 100 feet. Ours goes to 85 feet. The best part is that you don't have to climb it. You can rescue and bring down as many as five adults at one time. It has a built-in water gun that is capable of delivering 250, 500, or 750 gallons a minute depending on the amount of water delivered to the gun.

Fire fighting today is a real science. The men must be well trained and know what they are doing because smoke today is made up of 14 different toxic gases and any one of them can be lethal. There are materials being transported today that if you put water on them will explode violently.

Two fires that I will always remember from my days as chief are the the Our Lady's fire in 1966 and the Comeau fire in 1972. A church fire is very similar to a barn fire because once the fire gets started inside the church, being a big open area makes it difficult to stop the fire. However, we made an excellent stop at this fire and we were able to save the church. I was very pleased the next day to hear the representative from the archdiocese say to the state fire marshall that in his 33 years of investigating church and school fires, this was one of the best stops he had ever seen.

When we responded to the Comeau fire, the barn was fully involved, and there was no more than 25 feet between the barn, that was a raging inferno, and the house. The bystanders were sure we were going to lose the house because they removed every stick of furniture from the house. But, we managed to save the house, and I was always very proud of that job.

Even though I am retired after 39 years with the fire department, I give one day a week to the Deaconess Home as fire marshall. I inspect the buildings, test their alarms, instruct their new employees, and generally oversee the safety features at the nursing home. 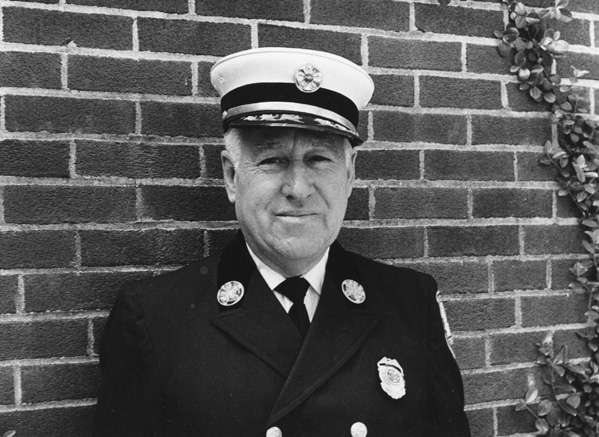