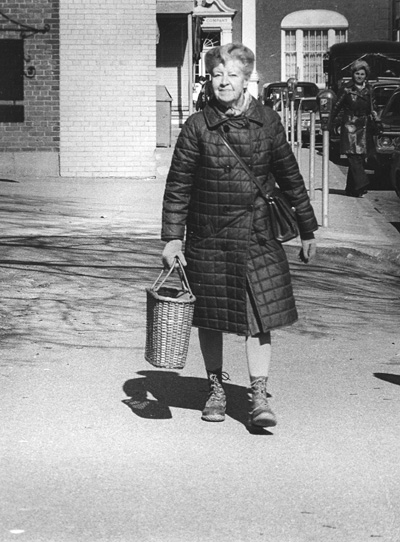 Life on Fairhaven Hill during the time of horses and sleighs was very lovely, and I and all my family regretted very much when automobiles came in, convenient as they were.

We had a single sleigh and a double sleigh and two horses, one used for plowing. And upon the advice of Dr. Chamberlin, we got a cow and finally two cows for when one gave out.

There had been vineyards over most of the hill and the ground showed signs of having been plowed up in ridges for the grapes, and there had been apple trees. It was too rocky for asparagus. When we started here, we dug up huge rocks, some of them as big as a small piano. Some of the men we hired to plow broke their plows up here and refused to do it any more.

My husband started a vineyard on the south side, and we had two blocks of two hundred peach trees each facing west. That was very satisfactory, we had every kind of peach. We sold them, and a man from Stow came over and did the spraying and all the work. He said we should not have any apple trees because some of the bugs from the apple trees would go right to the peach trees, so we hewed down the apple trees, which were growing very nicely, and depended on the peaches.

We had something like 29 rows of grapes. One row would be sufficient for the family so we had to sell them. We had competition with New York grapes at that time and it was difficult shipping them around or out of the state. But I found a place near where the Antiquarian Museum is now and I set up a stand there and sold the grapes. Any guest we had in the house was put to work lining straw boxes with leaves so they would look attractive.

The police came along and asked me if I had a license to do this and of course it hadn't occurred to me, so I had to get a license. My husband never sold by the roadside, he was perfectly glad that I was willing to do it. It was fun for a while.

We cut our own ice from what was always known as the "mud hole". The "mud hole" is much smaller now than what it used to be because they put Route 2 through. There was no Route 2 then, and I don't think we would have bought the place if it had been there or if we had any idea it would be the way it is now. It is impossible to get in or out now.

The pond was nice and big and we cut ice and the children skated there. We had a man named Peter Petersen, who was a very good woodsman and very good at cutting ice too. One day when we were there with the children, he slipped and fell in. It was a very cold day and he ran home over a 1/2 mile up the driveway with ice all over him. The children were very excited over that experience.

Many Concord people owned woodlots here. The men for the exercise and chopping down trees for the wood for the winter. These woodlots were all around the lower part of the hill.

For shopping and marketing I started going to Andersen's store and he would deliver. But in the dead of winter when the snow was deep, he brought the vegetables and food to the foot of the hill, and the Norwegian nurse I had at the time and my three boys would go down with a toboggan to get the groceries. They thought that was great fun and I think the Norwegian nurse enjoyed it very much too.

Two women's groups that I belonged to were the Mending Club and the Tuesday Club. The Mending Club was originally for mending--people brought quilts, many stockings, and socks to be mended for the various grandchildren. But now somebody reads aloud some book that we all vote on and choose, and now there is nothing but very elaborate embroidery. I don't see any socks or pillowcases being repaired any more.

The Tuesday Club in the old days would have readings, or acting out of plays, or recitations, but we had more games like charades which were very amusing and good fun. Ten or twelve people that were willing to act would do the shows, and the audience just enjoyed the antics and laughed.

Grace Keyes was a friend of a cousin of mine. They lived together at one time. of course, she was older than I but she was most distinctly a character with a wonderful sense of humor and very original. She was a marvelous golf player, I think she was the top woman at the time.

One time that I will never forget was when there was a large party at the Armory. I think Mrs. Adams walked down the grand march with the chief of police and a lot of very important big shots were there. Most of us were asked to wear a colonial costume of some sort which most of us did. Grace Keyes was dressed as a man in old working clothes with old blue jeans patched and in the back pocket, a whiskey bottle protruded and she had a corncob pipe. She was a real character, and of course she knew very well how to speak like she had been on the road. She made a great hit and I shall never forget what she looked like.

Mrs. Charles Francis Adams was having an antisuffrage party, and she asked to borrow from me a large silver coffee urn, which I had loaned to her on other occasions. I asked her what she wanted it for and she told me it was an antisuffrage party. So I told her she couldn't have it for antisuffrage because I was decidedly in the other camp. So she didn't get the urn that time.

Patty Hosmer had a picture of me standing in a doorway under a banner. I had an ancient pongee suit and hat on of the period and I had a sign saying "Are Women People?", which I marched with during the suffrage movement. 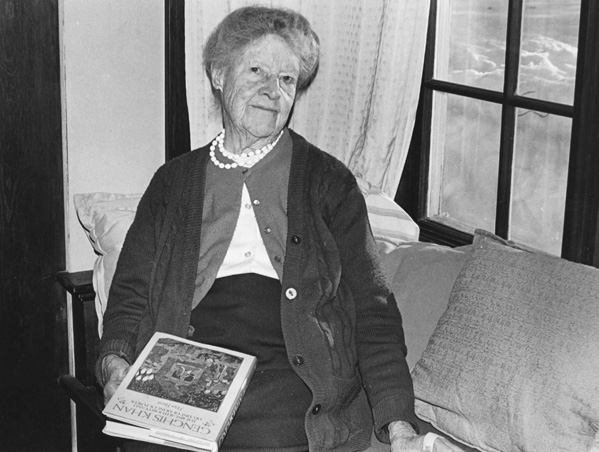