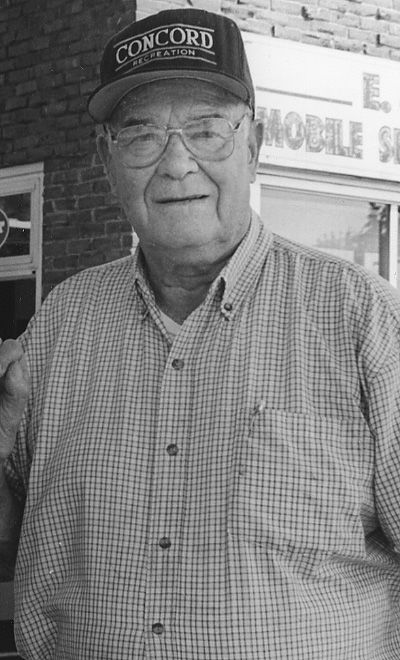 50th Anniversary of the federal legislation for the interstate highway system Change in mobility for the public, era of the automobile society.

Current location on Commonwealth Ave. (near Nashoba Bakery) across from Chrysler-Plymouth dealer, formerly his Uncle Kris Anderson's garage. Built by E.A. Comeau, a big contracting business with a lot of trucks and a customer. Commercial area businesses regular customers of the gas station.

Gas shortage crisis of 1973- cars lined up before 5 a.m., restrictions on selling Gas, fighting and violence among customers.

Comparison of how cars and gas are different today than previous eras.

This year is the 50th anniversary of the interstate highway system, heightening the impact of the automobile on our society. Howard Soberg has spent over a half century as the owner of E&S Mobil(e) gas station and garage in West Concord that has been so much a part of the Concord community. When Mobil ceased to be the gas distributed the station added the "E" to its name.

I opened my garage, E&S, on October 1, 1955 on Main Street in West Concord at the corner of Main Street and Baker Avenue where the Mobil station is now. It was a Mobil station then and we were the first ones to occupy that building. We were at that location for 12 years. Then we moved to Commonwealth Avenue, and we've been there since then. It's 51 years altogether. E&S stands for Edwardson and Soberg. My partner was Ted Edwardson. We were together for 40 years and then he retired and now has passed away.

When I first opened my station, regular gas was 21 cents a gallon. Today, it went down 20 cents a gallon with a new load of gasoline, and it's $2.46. A month or two ago, it was over $3.00 a gallon. So it's coming down. Gas stations and garages always went together and now it's mostly gasoline stations. They don't do repairs so much any more. When we first started, we had gasoline and repair mostly. We worked back then from 6:00 to 7:00 in the morning to probably 10:00 or 11:00 at night. They were long days, and sometimes seven days a week.

Gas station attendants used to have uniforms with bow ties and visor caps. Mine was a full service station and still is. We still clean windshields, it's a little harder in mosquito and bug season, And with salt and sand today, it's hard in the winter to clean windshields. A lot of these new SUVs and vans pick up a lot of dirt on the rear window.

Our location on Commonwealth Avenue is a good location. There's a lot of new development happening. On Conant Street they are now building new condos. West Concord has changed a lot. Right now we have so much traffic on Route 2 that a lot of people are coming by on Lawsbrook Road in the mornings coming down through West Concord center. It's backed up probably until about 9:00 in the morning.

Gas stations used to have a lot of promotions to attract customers. We used to give out free window scrapers, little plants of flowers, drinking glasses, or things like that. We started with Mobil for about 12 years. When we found another building to own, we went to Gulf oil. Then Gulf sort of went out of business in this area so we went with Citgo. Then Gulf came back in trying to build up the business again and we went back to Gulf which we have right now. When we started, we rented from Mobil. But when we moved to Commonwealth Avenue, we bought our own property. You still have high taxes and expenses, but it's better.

There are a lot of commercial people in the area that do business with us like Period Realty. Atlantic Prehung Doors was one of our biggest accounts and they moved to Leominster. We have a few FedEx trucks and we have Minuteman Prehung Door in Acton that comes in with their trucks. This is mostly for diesel fuel for these trucks. We may do small repairs on the big trucks, but usually they have a truck company come in and work on their equipment or they take them to their repair place. With Period Realty, we do a lot of repair work. There are a lot of small businesses like landscapers, electricians, and plumbers. The landscapers buy gas for their mowers and other equipment in the summer, but in the winter they buy gas for snow plowing and sanding, so it's a year round business. Then we have the West Concord railroad station, and there are more and more commuters all the time. There's a big parking area there, but there are always people who come down and want to rent parking spots from us. Right now I think six spots are not rented. Then we have Keyspan, Boston Gas and then we rent one corner lot to Devereau Corporation, a sub-contractor for Keyspan. We do gasoline and some repairs for them.

There used to be a lot of farmers around but now most of the farms are gone now so we don't do many farm trucks. I had an uncle, Kris Anderson, who had a garage. His garage was right across the street from where we are where Minuteman Chrysler Plymouth dealership is now. I worked a lot at his garage and I learned a lot there.

My Uncle Kris had a school bus to bus kids to school. During the war, early in the morning he would go to Camp Devens and pick up a load of German prisoners and bus them to farms in Concord like to the Wheeler farm at Nine Acre Corner. There were other busses that took them into other parts of Concord to do farm work.

I worked for Fred R. Jones Old Acres Dairy for about 12 years. I did door-to-door delivery. At that time we would work on the milk trucks too. There were a lot of dairies around. I used to deliver to Emerson Hospital and some stores and restaurants. I delivered all around town.

The gas shortage in 1973 was a hectic time. You'd probably open about 5:00 in the morning and the cars would be all lined up. You could only sell a portion of your gas until about 10:00 in the morning, and then you'd have to end the day and start again the next morning early. They'd be all lined up waiting again. I think it was at the time of the year when it was real dark early in the morning. Some people would be out there fighting with guns and everything. It was awful -- a lot of arguing as to who was going to be first. Then there would be some who would park near the pumps the night before. We'd get down there to open up, and there would be a line of cars. People had left their cars the night before and didn't showed up yet. So we would have a hard time moving those cars so others could come in and get gas. That was the worst it's ever been in a gas shortage.

Some of the things that are different today than they used to be are the headlights, the bulbs now are mostly sealed beams; the ignition systems are different with more computers; we would do the billing for the month and we used to do it all by hand; there were only two kinds of gas, high test and regular which was leaded at that time. Today all the gas is unleaded. Then we had diesel fuel for all the trucks and we still sell a lot of diesel. Oil is different now where it is now mostly detergent oil. It's a cleaner oil and it keeps the engine a lot cleaner. We used to have inner tubes in the tires which they don't have now. Most of the tires today are all season. You don't have to get special snow tires in the fall. We used to have to change every fall to snow tires, and in the spring, you'd take them off again. The same thing is true with anti-freeze. Now they have a summer coolant anti-freeze that you have year round, so it saves a lot of work in the spring and fall. They still tune up some cars in the fall for the winter. But that's all changed too.

The cars have larger gas tanks now too. Back then, you probably got 8 to 10 miles with a full tank of gas. Garages now have to have special tools for different models of cars, and you have to stock a lot of different parts. Back then, we had very few foreign cars. We might have an English car, or a French car, or an Italian car. We have two electric lifts in the garage and we have one hydraulic lift. We don't have any pits. Some garages used to have a pit in the ground, and you'd drive the car over the pit and then you go down in the pit and work on the car. I don't think they're legal now.

Two of my sons, Bill and Joe, own the business now. Another son, Dana, is working with them now. Right now just a couple of months ago, one of my grandsons came in with us. He's 15 and he's pumping gas. The new hybrid cars are coming in now. They run on gas and then it charges the battery after you get going and then you can switch to electric as you drive around. These engines are very quiet and you wouldn't know they were running. I think I saw an electric car years ago.

We used to have a lot of customers that are not around any more that we used to take care of all their trucks and equipment. E.A. Comeau was a big contracting business that had a lot of trucks. They were the ones that owned our first gas station, the Mobil station, and we used to do all the work on their trucks. For a while before they went out of business, we did their truck repairs on Commonwealth Avenue. E.A. Comeau was the contractor that built our station on Commonwealth Avenue.

We get fuel delivery about twice a week or sometimes once a week. We have a capacity of about 23,000 gallons with three tanks and one tank that holds four gallons for diesel. That's about the same amount of delivery.

We used to have trucks and cars in the West Concord Junction parade. I've seen the whole revolution of the car, and how important it is to everyone's lives.