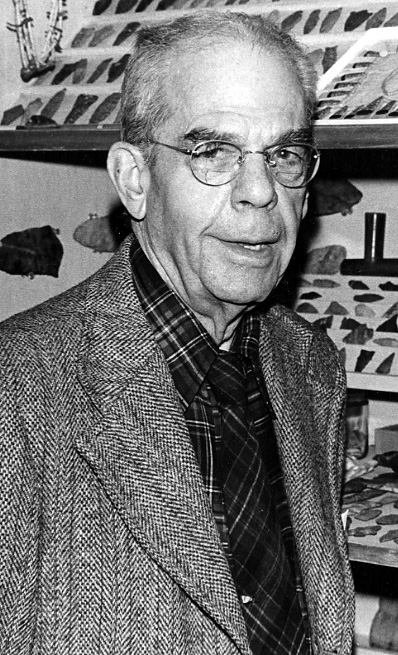 My interest in Indian relics was generated in 1909 by a walk with my father at the Old North Bridge in a field between the North Bridge pathway and the Old Manse which had been plowed up for agricultural purposes. Walking over the field, I found an arrowhead that was the start of my interest in the archaelogical field.

My father had a pair of books, a two volume issue of Human Origins by George Grant McCurdy, which were beautifully illustrated and I just lived in them for several years. The Concord Public Library had a display of the archaelogical collection of Adams Tolman and I was interested in finding where he located his specimens. He, on the other hand, was not at all pleased in sharing this information with another hunter. After his death I was able to get the catalogue of his collection from the library and locate the sites mentioned. This desire for privacy was nothing new and later when I became a charter member and past president of the Mass. Archaelogical Society, the members were hesitant about passing information on sites known to them. In the early days we were developing a site survey throughout Mass. with a number given and reoorded for each site.

Henry David Thoreal in his Journal, edited by Herbert Gleason, mentioned the sites of many Indian relics. He made the statement that I take with a grain of salt - " that he could find an Indian relic in any field of Concord." Gleason made a map of all the sites of Thoreau's Journal and gave these a number. The names of the fields were of older people than still existed in my time, for example Flint's field might have become Jones' field. Judge Prescott Keyes had a remarkable memory and could rename many of these old sites and thus I started a map of my own.

I have located over 150 sites between Framingham and Lowell and put these on U.S. Geodetic maps with my own site numbers. I was able to correlate my information with that of the Mass. Geodetic site survey, so there was no pos- sibility of that information being lost again.

Concord became a big asparagus center during the late 19th and beginning of the 20th century. Trenches were plowed 20 inches deep and the asparagus roots were planted in the bottom of the trench and the soil gradually filled in. In doing this deep plowing the farmers turned upside down and & partially destroyed a good many sites, particularly along the borders of the rivers. The Indian relics stayed on the surface and when cutting stalks, the farmers were practically looking at relics lying practically on the surface.

By 1910 when I began looking, the larger more spectacular ones had been picked up by the asparagus cutters for the past 20-30 years. They were the start of collections for various families.

With the building of houses and the laying of foundations along with the plowing and replanting of asparagus beds, a great many sites were destroyed. Most of my collection of 3,000-5,000 specimens were found on the surface after rainstorms and after spring and fall plowing.

One of the sites mentioned in Thoreau's Journal was the Indian shell heap by the bend of the river, the Concord bypass, over the Route 2 bridge. When they put the bulldozers there I was right with them. Right in the middle where Route 2 comes across the bridge and starts up the hill towards West Concord, a big fireplace was found. The parking space for Emerson Hospital put the final touches on ruining the turtle shell heap. I succeeded though in getting a representative collection from it.

At first I thought they were skulls, but they turned out to be turtle shells. Indians had eaten vast numbers of snapping turtles that they had caught in the river. There were also arrowheads and crude bones.

I have a representative collection containing samples of just about everything that was found in this locality. This includes larger tools like grinding stones for corn, axes grooved and plain, gauges, spearheads longer than three inches. There are arrowheads - hunting arrowheads, birdpoints, war points.- a variety of knives with both straight and curved blades, small and large gauges, arrowshaft straighteners, hammerstones used for chipping.

The Indians used to go to the salt water beaches and pick up good, round, solid stones and use them for hammers because the ordinary field stones that they would have around here would splinter. After the tool was pounded to the desired shape, it was polished with "Indian sandpaper," which was wet deerskin or wet rawhide dipped in river sand which could put on a high polish.

The collection includes chipping handlers, for chipping larger tools. From the drills you could tell whether an Indian was right or lefthanded, by the angle his drill went in. Plummets were round stones with the knob on top tied together with string or rawhide on a short handle, swung around the head and thrown into a flock of roosting pigeons which would knock over half a dozen. They could also be tied along the bottom of a fishnet with the top tied to a log to trap fish. The Indians shot arrows at fish and ducks swimming in the water and the arrows would frequently get stuck in the mud. Concord represented the eastern limit for the territory of the Nipmuc Indians who-were interested in the fresh water fishing. 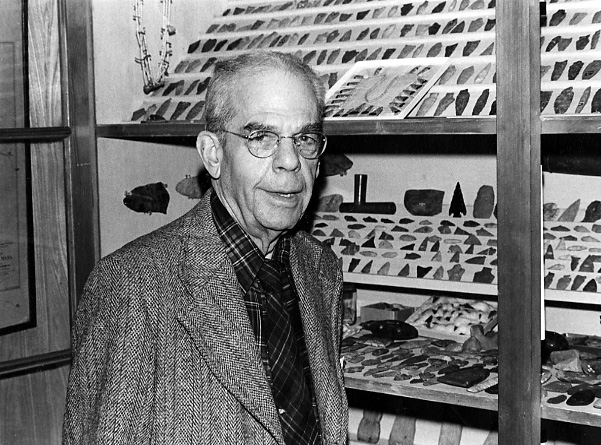