Nashawtuc Light House
from the memories of Marian Miller 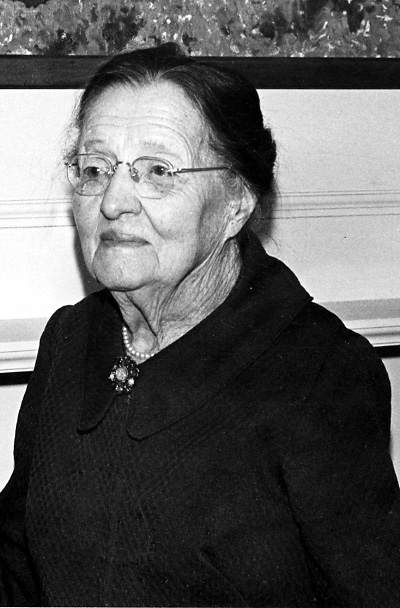 In 1920 when we moved to Concord, our house bordered on the Sudbury River. In those days anyone living along the river was likely to own a rowboat, canoe or kyack, kept unguarded on a pair of saw horses in the backyard.

During each seasonal dry spell the water level was so low that rocks would scrape the bottom of the canoe. Though we erected a bobbing sign in the water as a warning, it soon drifted away. So did a red flag from an overhanging branch.

In the summer of 1930 we had a very severe drought with very low water in the river. My husband, Hans, decided that now was the time to erect a permanent structure 'on the rock. What could be more interesting and beautiful than a lighthouse my husband decided to make a lighthouse in a class by itself-- it should be straight, white and colonial of course. Holes were drilled in a rock in which upright iron rods were inserted and around which. a large circular drum was placed in which to pour concrete. It took most of the summer to build the frame of the lighthouse and plan for the wiring.

The electric wiring ran from the lighthouse underground up to our house and into the cellar where it was attached to a switch run by our house current. Our son, age 14, proved to be a great assistant and patiently listened to his father's grunts, heaves and expletives.

Materials for the lighthouse had been salvaged from many places and friends. The best gift came through a classmate who worked with Edison Company in Lynn. He made arrangements so my husband was given the necessary switches and equipment to produce a light which would go on exactly one minute after civil twilight. In exchange, Edison used a photograph of the lighthouse in its advertising.

We set up a bulletin board to record the water level, wind velocity, temperature, time, current, etc. Local resident William Lincoln Smith, professor of electrical engineering at Northeastern University, was asked to examine the wiring and structure. After which he gave us a flowery testimonial to the effect that all was sound and had passed inspection.

Invitations to neighbors to attend the grand christening of Nashawtuc Light, were sent. Being a born actor my husband devised a costume which he considered appropriate to a commissioner as he dubbed himself. Our neighbor Bessie Millett broke a bottle and we had a grand party.

The lighthouse stood 15 feet high and people soon began to watch for its flash. Mr. Horton Edmonds who worked for the Boston Traveler, wrote an article on August 6, 1931 titled HWM Makes River Safe For Brick Steamer- That Phantom Inland Ship May Now Navigate The River Safely.

Hans had official letter paper with the heading, Nashawtuc Light, Boulder 88, Concord and sent greetings to other lighthouses. A newspaperman in Freeport, Louisiana, picked up the story and ran it in his paper.

1936 had been a very wet and cold fall and winter. Cakes of ice formed in the river and the water rose higher and higher. The current was strong and ice cakes bobbed around menacingly. We went out with poles, trying to push them aside.

When the water became so high that it could no longer flow under Nashawtuc Bridge, the pressure increased and finally the cakes of ice pressing at the top of the lighthouse pushed it over. The lighthouse was tipped down into the muddy bottom of the river, taking the boulder with it. We never tried to right it and it still lies there, the rock upturned, still scraping canoes.

Poem written by neighbor F. Sid Millet and printed in the Concord Journal on June 25, 1931:

There stands in quiet Sudbury,
(Tis the river that I mean),
A pillar tall and splendid,
A shaft so white and clean.

With its light so bright and cheery,
Like a beacon, shining clear,
To guide the tired paddler,
To his landing, safe and near.

And the traveler by the roadside,
Is guided on his way,
By the light across the meadows.
With its warm and far flung ray.

So here's to Skipper Miller,
And his one-man light brigade,
To the cheer he's given his townsmen,
By the lighthouse he has made.