Some of the names of other Irish families in the East Quarter at the beginning of this century were Burke, O'Connor, Dalton, Magurn, McManus, McGuire, Algeo, Dolan, McPhee, McKenna. It was a close knit community. The Algeos were protestant and the rest were catholics but that made no difference. They were all good friends.

Some of the Yankee farmers in the same area were Ben Clark, next door here, A.J. Tuttle down where Perry is now and he was from the state of Maine, Woodson, Horace Payne, and the Prescotts. Prescott originally had an asparagus farm. They had a government experimental station to develop asparagus there way back in the '90s.

Most everybody had asparagus and strawberries, cows, and some had pigs too. Some of them had quite large numbers of cows. Tuttle down there had 40 or 50 and the others had 20 or 25 and some of the farmers had six or eight like Burkes and Magurns. Strawberries from the turn of the century until after the World War I was a big crop in the East Quarter and all over Concord for that matter. Asparagus also. Everybody that had a piece of land grew asparagus. You got cash in the spring early.

Our house was bought by our dad in January, 1880 at a public auction and they moved in on the 17th of March. Our mother was from the north of Ireland and our dad was from the south of Ireland.

We went by horse and wagon to Fanueil Hall to market. No trucks then. The first truck we had any connection with was when we hired the Brown's grain truck to haul strawberries in. That was before the first World War.

The road here in front of us was paved in 1898 but the other roads were all dirt. When everything dried out, there were clouds of dust and then they started oiling the roads. I think when John M. Keyes was road commissioner he was the one to introduce oiling the roads. George Clark had the first car we knew about in 1904. He swapped the car for a horse afterwards.

Everything was horsedrawn in the early farming days, cultivators, harrows, wheel harrows, and spike-toothed harrows. Of course, you would plant crops in rows and use a single-horse cultivator. There was no irrigation of any kind at that time. Most everybody had fruit in those days, apple trees, pear trees, cherries or plums. George Clark was the only one who raised peaches. Some years he had a great crop of peaches there but it can be a tricky crop because there could be a late frost.

Growing up in Concord at that time was good. Life was simple and happy, that's about how to describe it. Boys made their own slingshots and bows and arrows and homemade skis made out of barrel staves on the front of a board. We had the old swimmin' hole at Lake Walden. The kids up at the other end of town used to swim in the river up off the cattle grounds. Up on Monument Street at the bridge they used to call that Simmons swimmin' hole.

Baseball was very popular. Football was too but it was only a seasonal thing only about six or seven weeks or so. I (Terry) played baseball up into my adult years. The last team I played with was the Concord town team in 1926. We were in the Middlesex County League at that time. There were eight teams, Concord, Ayer, North Chelmsford, Chelmsford Center, West Groton. We played the season in two halves. Whoever won the first half played whoever won the second half for the championship. West Groton won the first half and we won the second half, and they beat us in the play-off and won the championship.

There was also an "asparagus league". We had six teams, East Quarter, Sleepy Hollow, The Depot, Herringville, Hubbardville, and the Holy Name Society team from St. Bernard's. That league went on for quite a few years. We just had shoes and caps, we didn't go into uniforms. It was a fun league. We didn't charge admission or anything. Who would want to pay to see it anyhow? It was a lot of fun for the young crowd. I played with them until I was nearly 50 years old.

When we were growing up it was illegal to play ball on Sundays. We played down in Tuttle's field back when I was a little kid. I remember the time we were playing right down there near Clarks in a field. All the neighbors, men forty years old were there, and spectators and there was a woman who called the police. Billy Craig was the chief of police and he came down and he says to Mike "I've got to take your name because I got a complaint you know." He took all our names and then he says to Mike "Move some place out of sight of the road." And Mike says "Sure!" We asked Freeman Tuttle to play in one of his fields and he said sure because he was involved in playing ball too. We played year after year out back there every Sunday and nobody ever saw us.

The Emersons lived up the road from us. All the kindergarten classes visited the gardens in full bloom every spring. Then we would go into the house and Ellen Emerson, Ralph Waldo Emerson's daughter would serve us custard and gingerbread. She would run a dance now and then down in the old district school down here. I can remember them talking about it when I was a little kid. Maurice McWalter was a violin player and he played and she would have refreshments like cider and donuts. She and all the Emersons were great community people.

When they built the Emerson School, they did away with the district schools. This one here (on Lexington Road) was bought by Tom Burke for about $400 or $500. It was empty for a while and when Tom's son Jim got married, Tom gave him that place. He never lived there but there were several owners after that and one of the later owners made two apartments out of it.

The high school course of study included different divisions -- the general course, mechanics arts course, and college course. The college course kids all took Latin as well as English. They took Latin two years in gramer school too. We had French in the general course. Some of the kids took classes together but I never had any classes with the college course kids. They tended to be the more well to do in town. I (Terry) graduated in 1914 and we had about 16 in our class. There were kids there from Lincoln, Bedford, Acton, Carlisle, and Boxboro. Carlisle kids came to school in a three seated buggy with a span of horses, Bedford kids came by electric car, those from West Concord came by electric car, and Acton kids came by train. Some of the Lincoln kids rode bicycles. Jesse Baker rode a horse to school the whole time he was going to high school. He would put the horse in the stable for the day.

On the day before the celebration of 1925 it was pouring rain and then during the night the rain let up and it changed to snow in the morning. The ground was just covered with a skift of snow you might say. We had to walk up to see the parade and at 8:00 it was 24 above here. It was an enormous parade with a lot of floats and bands. They had a big ball in the state armory. It was the first time I saw the Shriners Band. Tom Finan was on the K of C float dressed like the Minuteman with his sleeves rolled up and it was a cold day for it. He stayed right in that pose with his hand on the plow the whole way around and he went to the hospital with pneumonia. He recovered and was sergeant of the police force for years. He's still living.

The state armory was built in 1915 and Monument Hall was built in 1904. They used to have minstrel shows and dances in Monument Hall. The Dramatic Club that they have now that's in the veterans building used to use Monument Hall for their shows. Before that they used the Town Hall. There were shows and dances there. Then the Dramatic Club used the Veterans Building on Walden Street and built a big stage. All the shows were there after that.

We used to go to dances in Maynard, West Concord, Carlisle, Acton. Did you ever hear of Carl Roddy? He was a trumpet player and a saxophone player. We used to follow him around wherever he played. All the young people were crazy about dancing. We were dance crazy that's about the way to put it.

The old Middlesex County Fairgrounds was up Belknap Street. There was a racetrack for harness racing, a steeplechase course, a baseball diamond, and a three-story building to house the cattle and horses and pigs for the shows. The fairs in Concord probably ended about 1900 because they were gone before my time. The only big deal I remember there was the Labor Day Fair put on by the Concord Council of K of C. There was no cattle show or anything just baseball games and harness racing all day on the racetrack. There was a big grandstand there for people to watch. They would have concessions.

Some of the people I remember were: Bebe Hosmer was the first one I ever saw wearing shorts. He was quite a guy. John M. Keyes was the head of the road department. He looked like Teddy Roosevelt. They were doubles. He was aware of it and he was always acting like him with his smile and showing his teeth. He had a store in the center, a sporting goods store where the flower shop is now. Frank Sanborn was an old Civil War abolitionist. He lived on Elm Street right near the river. George Warren was quite a character. He was a great fisherman and hunter. He used to build canoes. He made some of the best individual built canoes I ever saw. He was out in the West in the early days. He had a brother who was in the shoe business in Waltham who was quite well off. George was quite well off too. He lived right there up off Lexington Road. He was a bit of an eccentric. He asked to be buried like an Indian in a blanket and I guess that's the way he was buried.

We had eleven in our family. Sometimes I don't know how my parents managed it. Mike was the oldest and he was twenty-five years older than my sister Mae who was the youngest. When she was about 15 or 16, Mike started taking her dancing and a couple of people thought that she was his daughter. The older ones helped out with the younger ones. In those days they were all big families. There was nine O'Connors, eight Magurns, twelve McManuses, seven McKennas. It was quite a lot of work. Mother was a small woman too and I always wondered how she did all she did. They didn't sit around on their hands, they couldn't. 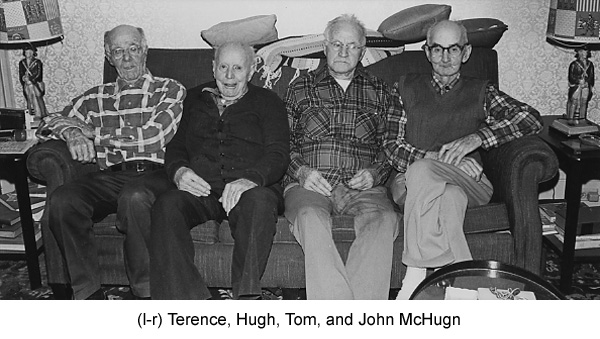