Interviewed December 12, 1979 at Ripley School before the student body
Age 65 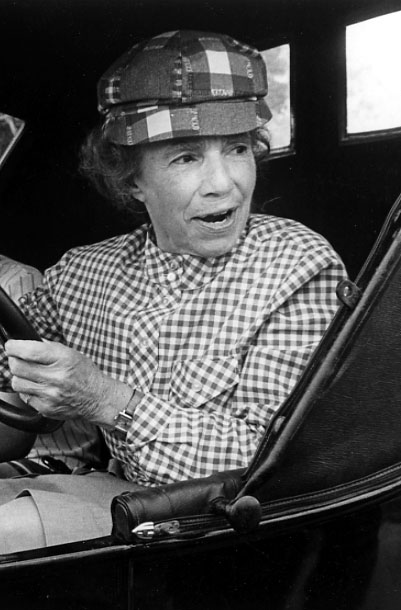 I was born in Beverly Farm, Massachusetts near the ocean area. I came to Concord when I was a year old and we lived on Bow Street. After about ten years we moved to Lang Street. I started school in 1920 and attended the Peter Bulkeley School from first through eighth grade. I remember playing a portable organ in the third grade.

My mother or dad would give us some money when we went to school and we would stop at Urquhart's bake shop, which was about where Brigham's is now. We would get chocolate eclairs for 5cents each. They were delicious. We also would go to Snow's or Richardson's drugstore soda fountains and get an ice cream cone dipped in chocolate for 5 cents.

I started to play the piano at age six. Miss Fannie Hosmer taught me piano. She lived on Walden Street. I always liked the Thornton W. Burgess stories and they were printed daily in The Boston Herald newspaper, and she would cut those stories out and give them to me at the end of each lesson, which I thought was really neat.

When I was 13, there were two special things that happened. It was 1927 when Lindbergh flew over the Atlantic Ocean. My brother, Peanut, was in the boy scouts and his troop was going into Boston to present a program at a new radio station in the Bradford Hotel. My brother and I played violin and piano together. He needed an accompanist so I went with them and it was the day of Lindbergh's flight. At our home we had a radio installed in an organ so my family got to hear us on the radio.

Also, when I was 13, I played the part of the witch in a production of Han sel & Gretel. I used to go out behind the garage and rehearse my lines. We held the production at the old Veteran's Building or 51 Walden now. I really enjoyed playing the part, and it was one of the highlights of grammar school.

My grandfather and his family lived on a farm on Strawberry Hill Road. My grandfather was a little man and he came from Italy. He had 12 children in his family. They all got along beautifully. My grandfather took his produce from his farm to market in Boston in a horse and wagon and he would have to stay all night. When he would come back to Concord the next morning about 8:00, he would wait in town for us as we were walking to school and he would give us a bag of peanuts. He had a big handlebar mustache and was really a delightful person.

The Ice Pond on Lowell Road was bought by my dad for one of my brothers. My dad used to cut ice there. My brother, Peanut, then bought it from my other brother and Peanut donated the pond to the town for ice skating. That pond was used to cut ice in the winter using large ice tongs to pick up the blocks of ice from the pond and from the wagons that delivered the ice.

I really enjoyed my growing up years with my brothers, all of them except one was younger than myself. But when I didn't have to help my mother, I went along with them and they taught me many things.

When my dad had the garage business was one of my favorite times. The first car they ever had was made by the Chalmers Company and then they had a Maxwell. After that came a Plymouth and then a Chrysler.

When my dad was young, he didn't like staying on the farm all the time. He wanted to travel so he took a job as a driver for a wealthy man by the name of Bemis and he drove a Roche Schneider, a French car. They traveled to Europe and elevated the car onto the boat. Mr. Bemis eventually gave the car to my dad and when he started his business, he converted it into a wrecking or towing car. Having that car pleased him, he loved taking care of it. To have it now would be superb. He also had a Pierce Arrow that he converted to a towing car.

Mr. Warren, a local man, liked simplicity and nature, and he made beautiful canoes. He was very much like an indian and wanted to be buried like an indian when he died. He bought a 1923 Model T Ford for about $400 from my dad's garage and later gave the car to my dad. My dad later gave the car to me and I still have it. My nephew keeps it in good shape for me. In the car was a collapsible jack and lots of little gadgets. There is no door on the left side of the car because the spare tire is there so you have to crawl in from the right side or over the left side. It's called a runabout and seats two people. It had a self-starter, that was the first year for the self-starting car.

Another nice person at that time was Judge Keyes. He ran the Middlesex Insurance Co. and he carried Hershey bars. I don't know why they didn't melt, but he would give those out to us. He had a Stanley Steamer car. When my mother was in her 20's, he let her drive the car but he didn't want her to drive too fast. My dad always did some jobs for Judge Keyes and occasionally my dad was invited to lunch. Judge Keyes liked raw cake batter but that didn't settle too well with my dad so he politely refused that. Judge Keyes's home was on Main Street at the corner of Nashawtuc Road.

During the World War II period, my brothers went to war, and I used to ride their motorbike. I also used to ride a bicycle to Carlisle where I live now, which was an old hoop and pencil mill, and we bought the property in 1932. 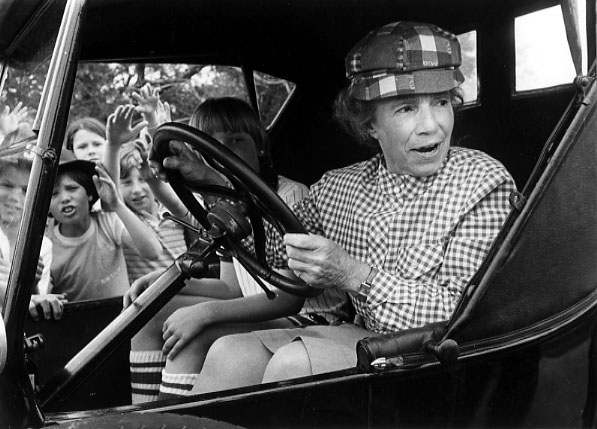