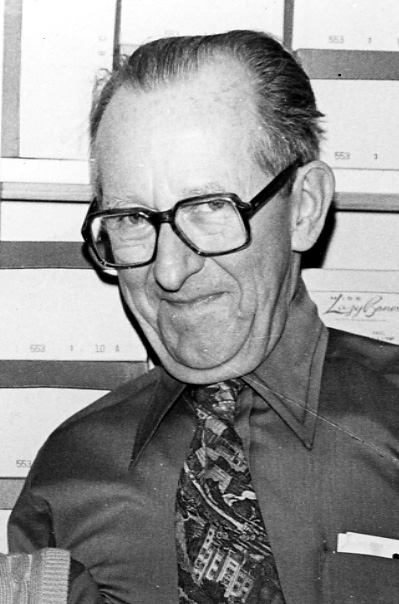 My family goes back seven generations in the shoe business, all the way back to Sweden when my ancestors would go from farm to farm building shoes. Farmers supplied the leather and my family would make the shoes and proceed on to the next farm. In those days you got one pair of -shoes a year and God help you if they didn't last till the next year. The first language I ever spoke was Swedish.

My father Carl Reynold Hay opened up a shoe store in West Concord, then Concord Junction, in 1900. We have the original store sign inside. Shoes were made mostly by hand with the aid of one little sewing machine at one time. In those days everyone had to have very sturdy shoes and there was no pavement as the streets were all dirt. You* did a lot of walking in those days.

Farmers were versatile in repairing their own shoes. They took a piece of horse harness leather and would place it at the bottom of a worn out shoe. Most everyone wore high shoes then. Shoes were made of heavy stock, not fancy and there would usually be a button on the side or the shoe was laced in front. There were some pullover boots as well. Everything made had to be heavy and- durable.

We used to use sole leather of hemlock tan bought by the side of the animal with the different parts - back, side and belly used for different parts of the shoe. Hemlock leather is extinct today. That was so hard you had to soak it overnight to work with it. We still have the old wringer in the store that we used to wring the water out of the leather in order to begin to work on the leather.

All the hand tools had to be heated by kerosene lamp. The iron had to be heated and you laid, the tool on the kerosene lamp to get it hot and rubbed the finishing wax on which was in turn rubbed onto the leather to finish the edges of the soles and heels. It was tedious work. You have machines today to do all that.

At the time of World War I my father began to buy ready made shoes from W. L. Douglas of Brockton, the largest shoe manufacturer then in the country. At that time $3-43-50 could buy a pair of shoes guaranteed to be all leather. W. L. Douglas had his own town, his own bank and the whole works down there. The workers' houses and facilities were all on the factory property.

A lot of shoes are no longer made in this part of the country anymore. Men's shoes are still purchased by us in Massachusetts but children's shoes come to us from Pennsylvania and Missouri and we purchase women's shoes from Ohio. Every section of the country has its work people who specialize in a branch of the industry.

My grandfather, Isaac Magnus Hay, came to this country after my father and opened a store on Walden Street across the street from the fire station which is noir Healy's package store. He repaired shoes during the week and preached on Sundays in the Swedish Methodist Church on the corner of Thoreau and Hubbard Street. He had some pretty hot sermons, in those days they preached fire and brimstone and they meant religion, it was not business but religion. He saved the souls on Sunday and repaired them on Monday.

My father's store was located at different places in West Concord. Originally on Church Street where the bank is now, we then moved to where the 99 Restaurant is now at the corner of Commonwealth Avenue across from Mandriolas grocery store, from there we moved to-where the Colony Florist is now, next to the post office. At our present location across the street from the post office, Adams and Bridges general store used to be located and at one time Carter Furniture used to be there as well.

For entertainment we went to the Old Association Hall, which was over the Post Office and see silent movies with Marion Fredericks playing the piano with all the mood music. There was good entertainment then and the floor would be cleared for dances on Saturday night. There were also dances that we attended in South Acton at the Exchange Hall.

As a youth the way I used to get my spending money was through shoe shining at 10 cents a shine, a 25 cent given to me would be a real tipper. The shoe store was kept open late Friday night to 9 p.m. and Saturday night till 10 p.m. and every night until 8 p.m. Saturday night the men would all come in and wait in line for shines and then would go to a dance. Those are the things that have gone by. Right after World War II shoe shining began to peter out - the way shoes began to be made they would probably fall apart if you shined them.

We used to work in the store until 3 o'clock in the afternoon and then delivered the shoes ordered or repaired through Concord, Acton, Lincoln, Sudbury, Littleton, Cochituate, wherever we got the call. It was a service that has worked out well and sometimes the very families that I used to bring shoes to then, their children and grandchildren come to the store now. You don't feel these people are customers, they are friends.

We have had the tradition of closing Wednesday afternoons to service people at the nursing homes or wherever people cannot come to the store. We do a lot of orthopedic care which is not new. In my father's time he did a lot of building up of shoes for clubfooted people, cork soles. We always had people who were crippled and needed a little help.

There are fewer tanneries in this country now and those that remain can dictate their own price. The United States sends a lot of our hides to be tanned and we have to buy them back which adds to the price. Now leather substitutes are on the market, such as Corfam.

My son Carl who works at the shoe store is now the seventh generation of the Hay family within the business. 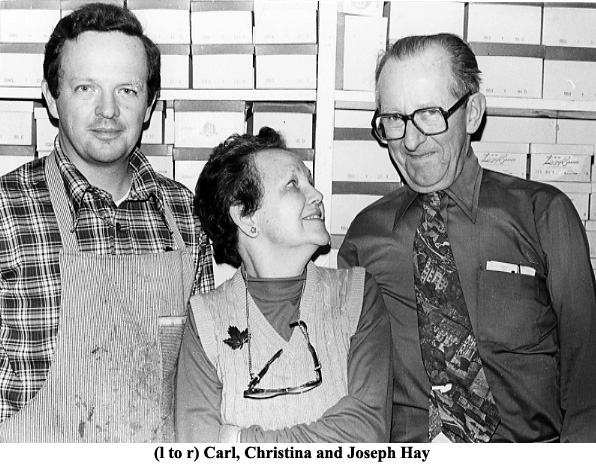