For thirty years Abigail Eliot directed what is now the Eliot-Pearson department of child study at Tufts University. She came to Concord in 1954 to live and began a second career in the field of mental health which she had an excellent back- ground for understanding as a result of her work with young children. 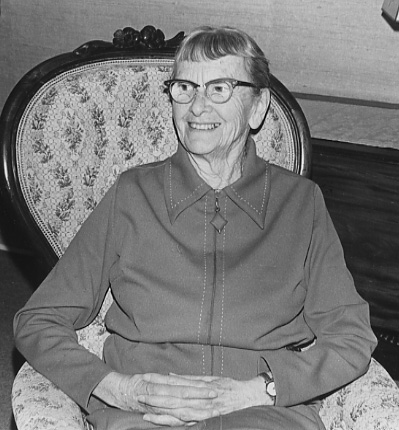 I began my work in early childhood education at the Ruggles Street nursery school and training center in Roxbury in 1922. The Ruggles Street school was then one of three places in the nation which offered a training program for teachers of very young children.

As a result of my studies at the Rachel MacMillan school in London, I became interested in the education of children from two through five years. of age. At that time, the only places in the United States where there were nursery school training centers were in New York City at Teachers' College and in Detroit at the Merrill-Palmer School. We came to know each other very promptly.

At the Ruggles Street school I took over an old fashioned day nursery and made it into a nursery school, stressing the education of the children in addition to their care. Very quickly I found myself interested in the children who were emotionally upset.

I became a friend of Douglas Thom who, at about the same time, had started a clinic in Boston for the study of emotional disturbances in children, known as the Habit Clinic. As we shared information and worked with some of the same children, I became interested in the mental health of the very young.

The Ruggles Street school soon outgrew its quarters and moved to two rented buildings on Marlboro Street changing its name to the Nursery Training School of Boston. The emphasis shifted to teacher training with the Ruggles Street facility serving as the demonstration school.

At first, students with only two years of college came for training. As students with bachelor degrees began to come for graduate training, an arrangement was made with the Boston University school of education to award a masters degree in early childhood education. As the years passed, and the faculty and course offerings continued to increase, it became clear that a permanent university affiliation was needed.

After thirty years as director of the nursery training school, it came time for me to retire, although I was just 60 years old. In those days women were considered not much good after they were 60. Before I left I saw to it that the school became affiliated with Tufts University.

When Dr. Evelyn Pitcher became the director sixteen years ago, the Eliot-Pearson department of child study was established. The department is partly named for Mrs. Henry Pearson who was chairman of the committee which had originally hired me for the Ruggles Street school. This was my background for understanding mental health.

When I moved to Concord in 1954., professional friends in the area approached me for assistance in developing a mental health facility. This led to the organization of the Mental Health Association of Central Middlesex. There were originally five towns in the service area which has now expanded to a nine town area.

The Walden Clinic, a child guidance clinic, was established in 1958 under the auspices of the newly formed mental health association and was housed at 17 Elm Street. Seventy-five children were served there during the first year by the staff, with parents paying fees on a sliding scale according to income.

There was a considerable amount of initial. resistance to a mental health facility in the area, as some citizens felt that good schools, churches, family life, and police were sufficient institutions to properly mold the young.

We were growing so and needed more space. Other agencies were also growing such as the Concord Family Service, the Red Cross, the Minuteman Association For Retarded Children, and we knew we ought to be near each other and must find a building to house us all.

I was president of the Walden Guidance Clinic at the time and we said very clearly that we ought to be near Emerson Hospital as mental health is a branch of medicine. We approached the hospital and the hospital let us have a piece of their grounds, renting it for $1 a year. The Community Agencies Corporation was formed with the purpose of raising money to erect the building that would house all the area agencies. Thus the Community Agencies building was completed in 1968 and although connected. to the John Cuming building, is a separate unit.

In 1966 with the passage of community mental health legislation, the board of the Walden Guidance Association voted to increase its scope of services in order to qualify for funds under that legislation. In-patient services were added when Emerson Hospital inaugurated Wheeler III as an inpatient psychiatric unit, and day care, education and consultation services and a therapeutic nursery school were added to the clinic services.

I have seen mental health grow steadily as more and more people have come to understand the value of its services. The education of young children and the mental health of children and adults are closely tied together. The beginnings of mental illness reflect what has happened in earlier life and if we can help them while they are young, they will become stronger adults for the future.