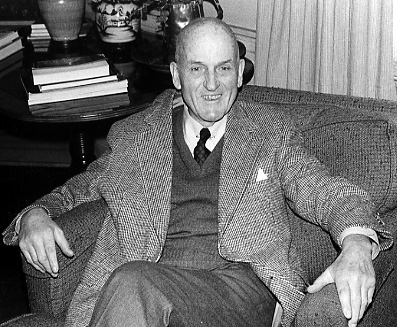 I was born in a little town called Booneville, New York which is four miles from the Black River. My father ran a big farm there, a gentleman farmer, and to me the farm and the Black River Valley and the stories of the old canal boaters who were retired, were strong influences. I became fascinated with the countryside, the people and the operation and building of the Erie Canal.

It was two years after graduating college, in 1928, that I decided I wanted to be a writer. I had written some short stories and in those days a story in the Atlantic Monthly or Harpers would bring $100-$125. I realized I wasn't going to pay my way in life writing short stories for the so called quality magazines. I did accept the offer of 11r. Sedgwick, editor of the Atlantic Monthly to write a novel about the Erie Canal which he promised to publish. Afterwards he confessed that he was rather terrified at what I might put into his hands. Rome Haul was completed in 1929 and Little Brown, who did the publishing for the Atlantic Press did the business promotion and pushed the sales and it was a success, though the $15,000-$20,000 it has paid me over the years is not considered big money today. The Big Barn published in 1930 and Erie Waters in 1933 met with limited success.

With a growing family to support it became very important to me to write for the so called slick magazines such as the Saturday Evening Post and the Ladies Home Journal, and Country Gentleman., which paid a great deal more money than the quality magazines.

I am constantly meeting school children who say they have read Drums Along the Mohawk published in 1936, some rather aggressively. Of course it was recommended by teachers in schools, even in the schools..of Pontiac, Michigan, where along with Pearl Buck's The Good Earth it was banned as pornographic, but that has never troubled me.

The book, which is about the early settlers in the Mohawk Valley during the American Revolution and their struggle to protect their farms against the British, Tories and the Mohawk Indians. For some reason this appealed to people at that time. It was in the Depression and the U.S. was in a confused state of mind and here was a simple story about how people -had managed to look after themselves, which is the reason why it became so popular. It is a real chronicle in that it deals with many local figures. The one or two national figures like Benedict Arnold are not character studies, they do what they have to and move on. Because so many people have been made to read the book when they were young, their excuse is that it is a classic.

My stories are the product of my childhood. There is a close similarity between the real and the fictional. This may be as Edmund Wilson used to tell me, "a return to the fantasies of childhood."

When I took Professor Charles Townsend Copeland's course at Harvard, he taught that the ideal was for the author himself to be invisible and there is only the subject and the reader. Critics often like something to hang onto and my style has been criticized as cold, dead and flat.

Rome Haul was made into the play, The Farmer Takes a Wife, with Henry Fonda as the star, his first starring vehicle and then made into a movie with Fonda as the hero. Instead of June Walker as his Molly Larkins, he had Janet Gaynor.

Drums Along the Mohawk practically had to be made into a movie because it was so successful and because of Daryl Zanuck's passion for historical subjects. When it came out, the hero was Henry Fonda once again. I didn't very much like the movie except for Edna May Oliver, the Irish widow who befriends Henry Fonda and who to me has always been a most marvelous character actress.

Chad Hanna, a book about early circuses of the 1830's is about a young man who comes to the circus and eventually takes over the management. He was played by, guess who?, Henry Fonda. So I don't know what I could have done without Henry Fonda but he certainly did all. right without me.

Some of the stories I wrote for the Saturday Evening Post were later published by Dodd Mead Co. as children's books such as The Spanish Gun, which was retitled The Matchlock Gun and won the Newbury Medal. We are apt to write down for children and what is important is not a children's story but just a story.

Bert Breen's Barn, which received the National Book Award and was published in 1975 is not written for children solely. I think the reason that it received favor was that it was a return to an old fashioned kind of writing and situation. A poor boy whose father has abandoned the family tries to lift his family out of poverty and one of the ways he seeks to do this was to get possession of an old abandoned barn and move it down to the little scratch pond where his mother and sisters live. The story is a study in customs like barn raising and the running of a feed mill that the boy gets involved in at the turn of the century. It is a fairly good presentation of country life as it was led at the turn of the century.

When we first moved to Concord a quarter of a century ago, we lived on Nashawtuc Hill and we never locked the door. It never occurred to us that anyone would break into the house. Now we even have gone to the terrifying device of having a burglar alarm. This represents the biggest change in Concord life for us.

On my father's side we are directly descended from Peter Bulkeley and through my mother's cousin and my wife's mother's cousin to Louisa May Alcott so between us we have quite a claim to being proper Concord citizens.