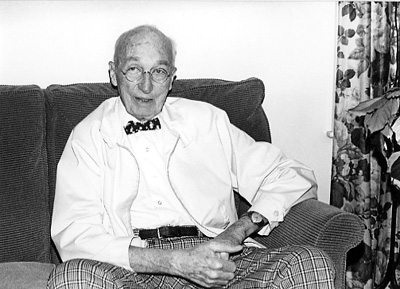 As I remember Concord when we first moved here when I was seven years old, here I was a young kid in a new town with no friends. But it didn't take long to meet next door neighbors and one of my best friends was Laurie Richardson, who lived practically across the street. We lived on the Sudbury River, the land ran right down to a fairly steep bank, which in the winter and springtime would flood all over the meadows and that is where we did most of our skating. The river wasn't safe because of the current keeping it fairly open so we had the meadows.

When it snowed, a couple of us had what we called "double runners", and we would pull those up Nashawtuc Hill and coast down. We would coast almost to the Nashawtuc Bridge. It was about 1910 when the streetcar came through Concord from Maynard down Main Street around Thoreau Street past the railroad station and down Sudbury Road right into the Milldam. There was a connection in the center of town with the cars from Lexington and Bedford, and you could get all the way to Boston by electric car.

When I was in high school, I was a special delivery boy for the post office. There weren't too many special delivery letters but every now and then three or four would come, and I would have to deliver them all over town. So I used my bicycle. I got paid 8 a letter, which was pretty high pay in those days.

When I was first married we lived in West Newton and then we moved to Concord in 1920. We bought a house on Elm Street just beyond Crescent Road. Then in 1929 I built a good-sized brick house on Nashawtuc Hill. The lot I bought from William Wheeler, who owned a good many acres all over Nashawtuc Hill. I bought 4 1/2 acres on the south slope of the hill, which was just pasture land in those days. I had to develop it; I brought in trees. We had a very cementrical shaped blue spruce tree at our Elm Street house that I had moved over. My next door neighbor, Mr. Lee, had a pine grove which he used to thin out so he told me to pick out any that I wanted. Ours was the only house between the Lee house and Walter Shaw's house, which was on the other side of Musterfield Road. My lot bordered on Musterfield Road.

I don't think there was as much citizen involvement in town affairs in the early twentieth century as there is now. Of course, we had selectmen and the different town departments, but they didn't have the roads to deal with, most of the roads were dirt roads in those days, and then later they were oiled. We had to keep them plowed in the winter.

We were members of the Concord Players. I never took an active part in any of the plays but I was on the business end. Julian Ballou was the president. All the plays were put on by amateurs and they put on good shows.

The First Parish Church was practically the town. It had as members all the town officers.

Some of the outstanding town people that I recall included Judge Prescott Keyes, judge of the district court here, Daniel Hoar, Henry F. Smith Sr. and Jr., Smith Jr. was the treasurer of the Middlesex Institution for Savings.

One of the things I remember in particular about Judge Keyes was during World War I when we had gasoline rations, he had a Stanley Steamer and he would ride around town with a big placard saying "I burn kerosene not gasoline." It was not a very heavy vehicle and in the winter when we would all be skating on the meadows, he would drive right onto the meadows and throw out a rope and we would get pulled around on the ice. So he was very popular with the kids.

The Social Circle was always interested in town affairs. In fact one or another of the members were in town offices at one time or another. I was elected to the Social Circle in 1936 and I was probably one of the youngest members at that time. And now my son is a member.

At our meeting just before Town Meeting all town affairs were discussed openly and some points were brought up at Town Meeting by some of the older members, who were officers of the town at one time or another.

My membership has been most pleasant and I was really surprised at my election, and I have enjoyed the meetings ever since. Now I am probably one of the oldest members and I still have a meeting at my house every two years. All the members have meetings at their houses for two years and then have a year off. That's the way we run the schedule. We have fourteen meetings a year from the first of October to the middle of April.