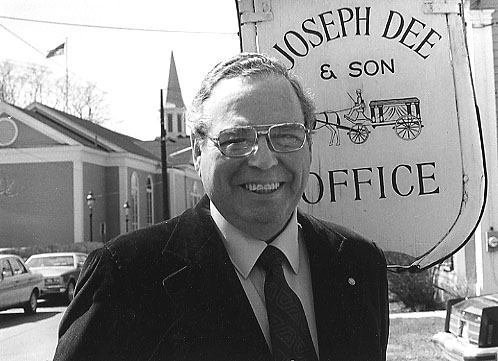 Use of the town hearse
Mrs. Hosmer's funeral
Custom of tolling the bell

My great grandfather Joseph Dee came from a farming community in Waterford County, Ireland in 1860. He walked from Charlestown to Lincoln and got a job at the Brooks Farm. He later moved with my great grandmother Elizabeth to -the Fay Farm on Bedford Street in the late 1860's. They came in a wagon with their five children and possessions, cutting through Bronson Alcott's backyard because Bedford Street was so low and boglike then.

I read in Thoreau's notations that he mentioned an Irish family had bought the Fay farm. My great grandfather combined farming with being a gravedigger at Sleepy Hollow cemetery. When my grand- father later went to work for Willard T. Farrar, the local burial agent, he accepted his offer to go into the business and succeeded him when he died in 1910.

Willard T. Farrar was a cabinetmaker, which was a common thing then since coffins were made to order at that time. The funeral business grew because the undertaker was asked to do more and more. People began to ask the undertaker to transport the coffin to the church and then to the cemetery. The hearse in each community was owned by the town, the way the firetruck is now. There were two wagon hearses, the early plain one and the later ornate one with six big plumes on top with heavy black drapes.

Our records start in 1868 when Mr. Farrar was appointed as burial agent and for a time the town records and the Dee Funeral Home records were one and the same. In 1936 as part of the WPA project during the Depression, card files from the funeral home were copied for the town.

In back of the First Parish Church there are a row of horse stables and the stable with doors was the hearse house. This was later moved to the first gate of Sleepy Hollow. School House District #2, where my grandfather went to school became the cemetery's tool house and I remember the pot bellied stove inside. My grandfather used it as a chapel with an organ inside and put electricity in one of the rooms. We still have the beaver hats, the coffin making bench and some of his brass edged tools. Younger boys got paid $1.50 by Grandpa to stay with the body all night and many of the Dee relatives were asked to do the same when needed.

There was the custom of tolling the bell at the First Parish Church when someone died - once for a male, twice for a female and three times for a child, followed by the person's age.

I don't believe that the reason you can't find the grave- stones of the earliest settlers is for fear that the Indians would see their numbers diminishing. The colonists used wood for most things and I believe this was true of the gravestones which decayed and disappeared over time. They simply weren't replaced after a while.

The first place in the springtime to be cleared of snow and frost are the hillsides-and as I drive through New England in the spring and see all those old hillside cemeteries I think how smart those early settlers were.

Jethro's oak tree stood between the Main Street and Old Hill Burying Grounds. There is the story that the reason for the two cemeteries was because of the superstition of the early settlers in carrying the deceased over a running body of water for fear the soul would be lost. But I don't believe that. The people from Nine Acre Corner buried their dead on Main Street and had to carry the body over the Sudbury River.

There were small pox burial places on Fairhaven Road at the junction of Route 2, in back of Colonel Barrett's Farm on Barretts Mill Road, and on Main Street, in the backyard of the Hosmer House where the overpass is. To curb a small pox epidemic which the early settlers were so frightened of, the families would bury the dead as soon as possible and burn their bedding and clothing.

The prison was a cemetery, though it is not used often and numbers are used to mark those buried there. There are four Civil War Veterans buried there. Some of the prisoners were brought up from the Charlestown jail for burial there.

The reason for the location of the Old Hill Burying Ground is because the First Parish Church was then located where the stone house on Lexington Road is. Originally the First Parish's budget was the town's. The grave most often visited there is that of John Jack, the freed slave. A group of local lawyers were responsible for erecting the tombstone, whose inscription the Smithsonian Institute copied through a rubbing.

Sleepy Hollow was created from a receding glacial formation called- an esker which left sandy pools of water. The natural amphitheater was called Sleepy Hollow, when it was owned by the Reuben Brown family and before Washington Irving's story by that name was written. It was one of the areas that Emerson like to go to meditate and it became the town cemetery in 1858.

The area between the New Hill Burying Ground and Sleepy Hollow was an agricultural field acquired in 1869. Fairs were held there, and a club house and cinder race track were included. We find the remains of the track every so often today when a grave is dug. Our forefathers in 1883 had the foresight to keep the land adjacent to what once was the agricultural field in the New Hill Burying Ground, open land forever.

To me Sleepy Hollow is America's Westminster Abbey, there are so many world famous people buried there - Author's Row includes Henry David Thoreau, whose grave is the most frequently asked for here, Ralph Waldo Emerson, Bronson and Louisa Alcott, and Margaret Sydney. Thoreau's jailor, Sam Staples, is buried nearby at the top of the hill. Ephraim Wales Bull who developed the Concord Grape, Elizabeth Palmer Peabody, the founder of kindergartens in America, and Daniel Chester French the sculptor are buried here. His memorial to the three Melvin brothers from Lowell Road,.killed in the Civil War, stands in Sleepy Hollow and is called Mourning Victory. The statue is of a woman draped in a flag with an olive branch in one hand and a dove draped on her shoulder.

The corner posts of the Wheildon lot are made in the exact shape of the Bunker Hill Monument, which he designed. The Hoar family was an outstanding one in Concord that goes back to the days of the Indians. The last speech to Congress that Senator George Frisbee Hoar gave is inscribed on his tombstone. And I was on the cemetery commission when the inscription on Anne Rainsford French Bush's grave (1878-1962) was added - she was the first woman licensed to drive an automobile in America.

In 1893 Sleepy Hollow was restricted to Concord residents. Its maintenance is supervised by the town and members of the Dee family no longer dig the graves.

Some of the early funerals were paid for by potatoes. No veteran was ever denied burial because he was too poor. There are still some of the table top tombs from the Civil War period, made of sandstone which crumbles. My father James and Harold Orendorff chartered all of the veteran's graves. Timbers from the oak trees felled in the 1938 Hurricane form the cannon, marking the lot of veterans from the Grand Army of the Republic.

The last time the town hearse was used was in March of 1970 when Gladys Hosmer died. She was an archivist and local historian and it was her wish which we honored. The streets were lined with people watching the hearse pass from the Episcopal Church to Sleepy Hollow. And all you could hear was the clippety clop of the horses hoofs while the bells tolled Mrs. Hosmer's age. 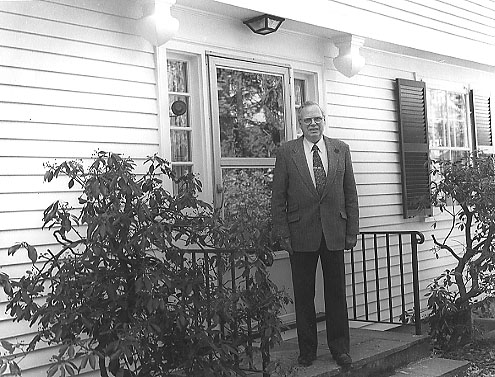