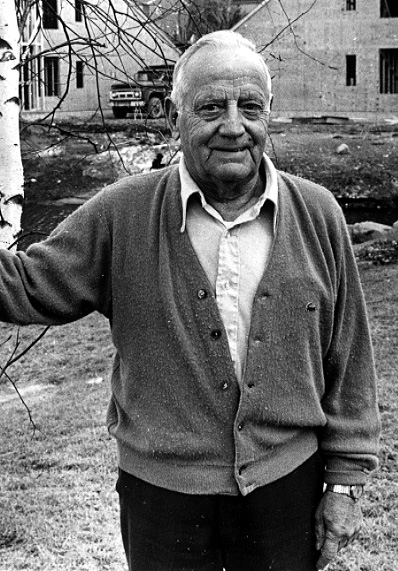 I would describe the Concord of my youth as a quiet farming village whose people were mostly friendly and hardworking people with very few diversions other than baseball and family gatherings. They were also very much church going people.

My parents were of Acadian background and my father, Edward Augustus Comeau came to West Concord during the 1890s and started the business of contracting, stone masonry and moving buildings and furniture. He came to Concord from Acton where he had his first home at the request of English businessmen, some of whose families had been here for three or four generations, and set up business. These old Yankee businessmen had a lot of faith in my father and backed him in his business ventures. My mother, Olivia Ann, was from Maine and went to Nova Scotia as a girl.

In 1915 my father, being somewhat of a pioneer, bought two Pierce Arrow limousines and took the bodies off and made them into trucks. He kept one for himself and sold the other to the Concord Water Dept. That was their first truck. At the turn of the century, there was no Catholic Church in West Concord and my father and Mr. James Russell took turns giving the people rides to St. Bernard's in Concord Center. The Catholic Church was built in West Concord about 1908.

My father took the job of plowing the sidewalks and breaking the roads in 1904, as well as pulling the fire engines. They had two hook and ladders. At that time it was my ambition to drive the truck and be a fireman, though it became motorized before I had the opportunity, though I did drive horses for my father. I helped haul the stones to build the wall in front of the Harvey Wheeler School in 1918.

The Reformatory had a great deal of influence over West Concord and the people who worked there were a little better paid than the average person. The Damon Mill at the start of World War I became the Strathmore Worsted Mill. Then the Allen Chair Company came in and brought in a number of people of Belgian and Italian extraction to work during the war years. At the turn of the century a number of Italians had come in to work to install both the water and the sewer system.

There were a great many poor people, really poor, I recall people picking up the trimmings and bark from the Allen Chair Company to heat their homes. Other boys would go up and down the railroad. tracks to pick up the lumps of coal that had fallen down. Most of the boys worked at that time and it was a common thing at 11 or 12 years old. My father owned the farm and the contracting business, so I never had the chance to be a juvenile delinquent.

We had to get up at 4 AM to cut asparagus and when I became old enough I drove an ice team for an ice wagon. During those days there was not too much skiing. A lot of sliding and skating, some hockey and baseball which I was very interested in. Of course I was very interested in that being near the playground and I played semi-professional ball for 10 years after high school.

I graduated from Concord High School in 1923 and at that time there were 100 in my class, the largest class up to that date. We had students of Irish, Italian, a lot from Scandinavian backgrounds, and Belgian. At that time we included Lincoln, Acton, Boxboro, Carlisle, Littleton; Lincoln had the choice of going to Waltham or Concord. Bedford had the choice of going to Lexington or Concord. They came also from Sudbury and as far away as Dunstable. They could come in by train. In fact I met a man the other day who graduated from Concord High School in 1911 and was very proud of it. Concord had an excellent scholastic reputation. There was some uppishness in high school by those taking the college and scientific courses who didn't think-the people taking domestic arts or mechanic arts were quite their equal. I think they have since found out otherwise.

At that time the Bluine came in and was a very interesting industry. My wife's uncle, Mr. Conant, invented the process where the powder is made up of sugar and steamed and was used in the washing process. They started the factory here West Concord. It was a tremendous boon for West Concord since everything was shipped mail order. Children sold the packages of bluine in return for receiving prizes.

After World War I the homes in West Concord were upgraded and everything went along fine until 1929 when we settled into a Depression that is difficult to explain. People were just destitute, it was a very difficult time trying to meet payment. I was married in 1930 and went through the Depression with everyone else. It is an experience I hope we never have to encounter again. When World War II came along we came into a much more prosperous era.

The town was predominantly Republican then. The Democratic party had a few spark plugs who were always pushing. I served seven years on the Finance Committee, seven years as Water and Sewer Commissioner, Chairman of Public Works and liaison between the county and state boards prior to the town manager coming in.

The first industry that I was aware of was the Pail Factory when you approach the bridge at Commonwealth Avenue. That is the reason why Warner's Pond was built and the dam erected. In my time it was a canning factory.

The Boston Harness Shop was on Main Street and did a tremendous business during World War I as did the Strathmore Worsted Mills which my father heated with wood to keep it running 24 hours a day.

The Association Hall, where the post office is, had three floors and included a drug store, a poolroom, a place where movies were shown twice a week under the control of Mr. Derby, the postmaster, social activities and dances took place and the Oddfellows Ball was held here. On the third floor was where the Oddfellows and Rebekkah's Lodge had their quarters. I as a young man managed the movies for Mr. Derby when he wasn't there. I worked for him in the post office while I was attending college.

Managing the movies was quite an experience. My duties were to sell the tickets which cost 11 cents downstairs and 17 cents upstairs. Movies then consisted of a cathay movie or travelling show, a serial such as "The Perils of Pauline" or "The Clutching Hand," and then we had regular movies, some of which left a lot to be desired. At the end of that was a comedy, though we had enough comedy in the movie theatre with the helmet like hats that the policemen wore at that time. After intermission when I sold enough peanuts, the boys would bounce the peanuts off the policeman's hat, leading to the ejection of some. Sometimes we had a soloist, who was ambitious to work himself up and the soloist really left a lot to be desired. This was the era of the silent movies.

Besides working for Mr. Derby in the post office and the movies, I would assist him with other boys driving the cows home from Carlisle. That would get a boy three movie tickets, though I never had to pay for the movies.

We had many preparations and meetings for the 1925 Celebration. My father was in charge of trying to support the old North Bridge, which at that time was a concrete replica of the original. They were afraid that the marching feet would be too much for the ancient structure. We also had to truck in all the extra chairs and prepare the armory for Vice President Dawes, and for the dance that night. It was so cold I can see Elsie Rose, the town clerk, a very handsome woman riding on a float with her cheeks just about blue from the cold. I had an aunt and uncle who were going to make a cleanup and had a stand on Lexington Road for which they paid considerably for the privilege. My aunt was a caterer and made up cakes and sandwiches and the only thing they sold was coffee. With a friend I cleaned about two acres of land on Everett Street for a parking space and the only customers we got were ourselves.

Originally our plans for building Concord Greene was to be on land adjacent to the airport where we owned 100 acres but this interfered with Massport's runway and other concerns of theirs. We knew we had to do something with our farm in West Concord as the taxes were becoming prohibitive. Though it was zoned originally in 1927 for multiple dwellings, we encountered every problem and long delays beginning with the Planning Board. It was a very frustrating experience.

The town fathers thought we would overload the sewers and undertook a survey which delayed the process for ten months. During this time another group of committee members had to have their say so resulting in further delays. We had erected 36 apartments at Hawthorne Village for Mr. Damon in West Concord and the Planning Board didn't like the looks of those and since we were using the same architects, we had to dismiss that firm.

We were also faced with environmental impact statements and building laws which had changed but subsequently we were allowed to go forth with considerable success. 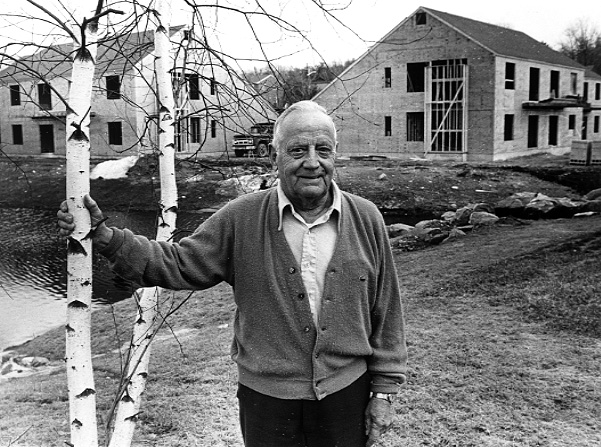