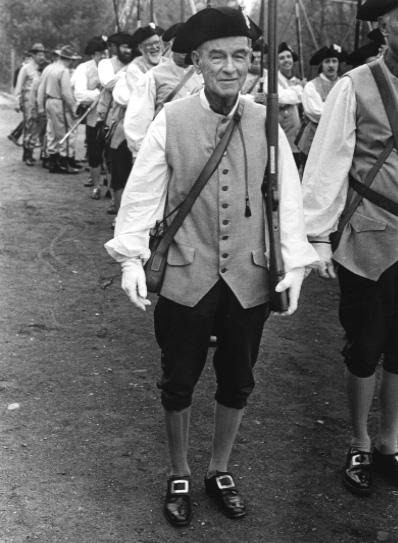 Byron Street is named after my grandparents, I understand my grandmother called it Love Lane. She built a two-family house on it. At the Sudbury Road end of Love Lane, there were a few buildings. In one, Herbert Neeley had a carriage painting shed and there was also a blacksmith shop. On Sudbury Road there was another blacksmith shop owned by Mr. Moreau. At one end of the building was a wheelwright shop owned by Mr. Milbury. We used to stop there and watch him put on new spokes and rims on the wagon wheels.

We did a lot of roaming around Lake Walden where the old railroad station used to be in that area and the picnic grounds across the railroad tracks. In the late fall we would set out traps for trapping. There was only one drawback, I could never bring myself to skin an animal so I had to pay somebody else to it. We would hang the hides on the chicken house we had in the backyard.

The people that owned the woods were always glad to see us picking blueberries and things like that.

One family by the name of Shaw up on Nashawtuc Hill would always give first aid and hot chocolate to anybody hurt while sledding up there. At the other end of town there was a family named Adams that had a large house with white pillars facing the Sudbury River, and we used to bobsled and ski in that area. We used barrel staves with a rubber band made out of old tires for skis. The Adams family supervised the young people and they appreciated the woods, so there were no problems at all. Those were two outstanding families that I remember from that time.

My father ran a grocery store at the old 11 Thoreau Street. After working at the J.P. Murray Store, which was on the Mill Dam, he worked for a fellow named Frankie Cutler. Cutler had a store where the Concord Package Store is now. Where the auto parts shop is now there was nothing for a long while until an Essex-Hudson automobile dealership was built there. It belonged to Tom Hall, Dr. Titcomb's son-in-law.

So my father had the store where Cutler was. It was all grocery items. Coffee came unground and tea came by the kind or type, such as oolong, and some people would want a quarter of a pound of this or that and we would bag it up. I can remember helping my father grind coffee. I was so small that I would have to stand on a wooden box to take the wheel around.

Before World War I, he had two men working for him. Both of them were drafted into the war. So my brother, William, was taken out of school to deliver orders. Each store had it's own route in each section of town. We would have to pick up molasses jugs, kerosene cans, and vinagrette bottles (a bottle with woven rattan around it), and then return them to the customer the next day filled. When I was about eight years old, every morning I would have to get up and go down to a barn on Thoreau Street and feed the two horses, put the harness on them, hitch them to the team, bring them to our house, and then my father would take the horses to the store. The barn was where Walden Terrace is now. The barn was moved and made into a two-family house later.

I remember one time coming back from Old Bedford Road heading toward Bedford Street, and the snow was so high and drifted that we couldn't go any further. At the next house my brother and I telephoned my father that George, the horse, was steaming from perspiring and we were afraid he would collapse. So we stayed at the house all night and the people gave us some food and hot chocolate and offered us a bed, but neither one of us wanted to leave the horse. So by morning the streets were cleared enough for us to head home. It was quite a nightmare.

We had a little different feeling for animals in those days because we used them for work and for carriages on Sundays to ride around it. There were no automobiles.

Where the Triple A Market is now, there was a wooden firehouse. When the firehouse was sold, it was moved over to Wilson Lumber and used for a paint shed on Love Lane. On the corner of Middle Street was McManus's stable. People delivering goods from Boston or Waltham would unhitch their horses and get fresh horses to go as far as Littleton or Groton. They would pick them up on the way back. Behind the stable was a greenhouse owned by a family named Wheeler. Across from Friendly's was a turntable that was used to turn the engines around to head back to Boston. This was called the Fitchburg division of the Boston & Maine. There were also a lot of grain sheds in that area because there were a lot of cattle and horses transported by train.

My present house is part of the Ebenezer Hubbard estate. I understand that there were only two houses across the street and that was the end of the street. Ebenezer Hubbard had sold this land and moved his house from where the church is now at the end of Hubbard Street to near Route 2. The land behind my lot was going to be used to put a street through but it never materialized. So the lots all the way down the street were sold as a full lot, and this was the first lot on this side of the street. On the back lot on Thoreau Street my grandmother's brother and his family lived.

During that time the playground did not extend all the way to Thoreau Street. It was about 3/4 the length it is now. Dr. Emerson owned the rest of the land and he wouldn't sell. There was a rise there with wild cherry trees; the land was not flat. A brook ran halfway through that and turned right and went underneath Everett Street. During World War I, with everyone using horses, all the families around here used water from the brook. Later a culvert was put in there and the land was flattened out.

One time we wanted to cut the grass on that land to use as a ball field, but my father told us it belonged to Dr. Emerson. Maurice McWalter and I went to Dr. Emerson, and he said to leave it alone. But on the following day, his hired man came down to cut the grass and we went down to help him. He said he would do it again when it got higher, but we told him we all had lawn mowers and we would take care of it. So we played ball there and when Dr. Emerson died, he left the land to the town with the stipulation that it be used for a playground with no admission charged. So later tennis courts were put there. Many people have enjoyed the playground, and he was a very nice gentleman to be able to pass on good times to other people.

We always called this end of the street Hubbard Street extension. It ran to Union Street and across to Fielding Street and in the middle was Willow Street. I was born at 4 Willow Street. We moved to this house after my grandparents died in the 1920's. When I got married, my wife and I lived in this house too because there were so many rooms, and when my mother died in 1941, I purchased the house from the estate. This area was called Herringville because so many people came from Nova Scotia. We had a baseball team as did the other sections of town, Hubbardville, East Quarter, and others.

My mother's grandfather was a boss on the railroad when it first came out through here. They had shanties built at Lake Walden because it was handy to get all the water that was used. One Sunday my great-grandfather found one of the shanties partly dismantled. He thought there had to be footprints so he followed this path into the woods. There was a man living in the woods that people said was a little "touched in the head" or not quite sane, and he had taken the wood. They told him he would have to put it back. That man was Henry David Thoreau. My mother's aunt told me that story and being such a gracious old lady I don't think she would make that up.

My other grandfather came over here from Ireland when he was 13 years old. He went out in a covered wagon to the gold rush in California. He and his partner made out pretty well. My grandfather must have had a little ESP or something because he suddenly had a feeling they should sell. So they did sell and my grandfather came home by ship around South America. Two months later water got into the mine so they probably would have used all their money to get it drained. He had a few nuggets around the house so he had the Waltham Watch Co. make a watch for him using his gold. He said to me many times that the watch would be mine but my mother's aunt decided to keep it.

In the spring of 1963, Jason Korell suggested a group be formed to participate in town celebrations. So a group of us met at the Colonial Inn and formed the Concord Minutemen. General Whitney was the presiding officer. I was nominated for the executive board. We set up a constitution and also had a patent on the Minutemen emblem done by a patent lawyer. I was talked into the position of quartermaster. I went through a bag of patterns and being a construction worker, the only thing I knew about sewing was one end of the needle from the other. But I dug in and searched out sources of material for vests, shirts, and pants. The Antiquarian Society allowed us to make a pattern of the original shoulder bag and we had exact copies made up. A powder horn was also included. It could be either a large or small powder horn, they were both used in firing muskets. We tried to keep the uniform cost low so everyone could join the group.

Over the years the group has been fantastic with men from all occupations. We participated in two inaugural parades, Nixon's and Carter's, and the Orange Bowl parade. We are always received warmly. The executive board gets lots of invitations for the group to participate in different events. We try to keep the patriotic spirit alive.

This group really gives you a chance to appreciate what our grandparents and the people before them had done to make this country what it is. It makes me angry at times to hear people criticize this country. When I was in World War II and traveled all over the world, I saw what little those people have compared to what we have. It seems the older you get during some part of the day you stop and count your blessings.