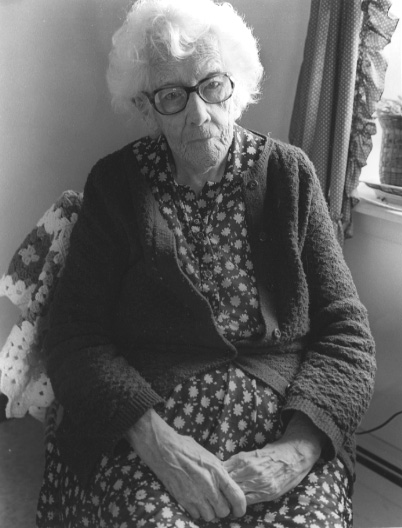 Strawberry picking was a must in the summer and though the pay was only a cent and a half to three cents a box we managed to save a tidy sum to buy clothes to go back to school. We went picking blueberries at Lake Walden and the old golf course on Hurd's Hill. Sometimes we went to the Lime Kilns where there were nice high bush berries. We went there in groups in a farm wagon and usually stayed all day. The blueberries we enjoyed the next winter were worth all the work and the fun of the summer.

We went swimming in the Concord River under the railroad bridge. We went in our dresses and pants and sat in the sun to dry off before we went home. Brave boys who went swimming before June looked funny in their long underwear rolled up. In those days it was considered dangerous to go in swimming before June first. Before Lake Walden had the shore as it does today it was considered unsafe to bathe there so we usually went in at the cove. When I was about eight to ten we played house at a spot called the Hump. It was a large branch of a willow tree which fell across the brook between Brooks Street and Wheeler's field on the other side. It was quite a secluded place where we stretched our imaginations into living like older people.

A favorite excursion was a walk up Sudbury Road to the studio where some of Mr. French's sculpture models were stored. That door was always open and children were in and out there with never a report of any damage. Of course we always checked with Mrs. Hollis next door to go there. She always welcomed us on our visits to the studio. She would cut out doll's clothes for us and let us play in the large doll house and sometimes we had rides in their pony cart. Peggy O'Brien was always my pal on all these excursions and we were close until I was married.

Down the street lived Pat Harrington whose body had served as part of the model of the Minute Man. Another feature of my play days was to gather the kids in our attic and play High Mass. The altar was a bureau and communion time was the highlight of the game. As the one who happened to be the priest came along with necco wafers in a bowl, there was always a scramble to get the chocolate ones. That noisy attempt brought in my father one day and that ended such blasphemy. During the summer for a few years, trips were provided to Lake Nagog in Acton. We went by horse drawn barges from McManus's stable and we took our lunches. It was for children under twelve. The money had been donated by an unnamed donor and all of a sudden it stopped. There were rumors of misappropriation of the money and so it died like many good causes.

A very special summer event was our trip to Revere Beach with Margaret Loughlin. She took several of the neighborhood children by train to the North Station where we then went to Revere by the old narrow gauge. There were never any casualties and we always arrived home safe and happy and tired. In my later dealings with scouts I looked back and marveled at her kindness and patience and the courage to be responsible for these children. She was so patient and understanding with us. I think she was like her mother, of whom I have one recollection when I was very small. She would invite us in sometimes when she baked bread and spread it with butter and jam and it was a feast to behold and eat, with a little lesson thrown in, saying please and thank you. Summertime also brought the circus to the cattle show field. May day was also celebrated in the cattle show building and the old building rocked to the rhythm of the May Pole dancing.

On Labor Day, the Knights of Columbus had an annual field day in the cattle show field. They held sporting events and the trotting races were the big attraction. People came from far and near to race their horses against Mr. Maker's "Topsy M." This beautiful black horse usually was a winner.

Winter time had its fun too, like punging after school on the delivery wagons from the Mill Dam Stores. Riding around to the surrounding towns, I had my first glimpse of Lincoln and Carlisle. We skated on the meadow at the foot of Hurd's Hill and Judge Prescott Keyes often put runners on his car and rode us around on the ice. Many people skated at night and it was a beautiful sight with the bonfires lighting the sky and silhouetting the graceful movements of the skaters as they waltzed or did their figure eights. In that meadow too we picked cranberries. On Thanksgiving Day my father often went on a visit to McHugh's at the East Quarter. As I remember there was always a lot of snow on Thanksgiving Day then. He would hire a sleigh at McManus's stable and spend the day reminiscing about the old country and singing the old songs. "The horse knows the way to carry the sleigh" could well be applied to our return trip. By then my father glowed with the joy of the day. The Irish people and other ethnic groups too stayed so close in those days.

Concord made the holidays a very special occasion. Memorial Day was then celebrated as "Decoration Day", and the whole town took part in honoring the veterans of the previous wars. The day before, my friends and I went to the woods near the old golf grounds on Hurd's Hill to pick wild flowers for the wreaths. There was often some snow left on the ground but the white Solomon Seal seemed to thrive as they stood erect there and Lady Slippers were bobbing all over the place. Today they are almost extinct. Imagine a whole wreath made of Lady Slippers. After the wreaths were made they were taken to the old Armory and donated to the Veteran's Organizations to decorate the veterans graves. After that in the late afternoon, when the veterans returned to the square they held an impressive and solemn tribute. It was such a visual link to the past and so patriotic and the martial music so inspiring I often stood through it all with a lump in my throat. Before Decoration Day veterans came to the school in their uniforms and related their experiences and we had a living history lesson. As I recall that time it seems I reached times and people who lived long before my time. There were many civil war veterans then and the younger Spanish War Veterans were spry and in good step. I watched then sadly over the years, slowly disappearing and passing on to their place in history. It must have been of special significance to the descendants of the Revolutionary War and they always took a part in a very personal way. With the years all these old and treasured memories have gone and new strange faces watch, but they cannot recapture the grandeur and solemnity of our day.