Click here for audio
Audio file is in .mp3 format.

The first portion of the taping is Dalgo's eye witness account of the attack on Pearl Harbor, Dec. 7, 1941.
The second portion is remembrances of growing up on Belknap Street, "in back of the depot" particularly as applied to the Italian community. 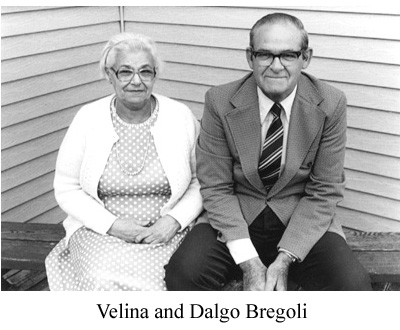 I was just over 20 when I enlisted in the navy in 1939, believing that eventually the U.S. would go to war with Europe. I was assigned to the U.S.S. Perry, a destroyer minesweeper stationed in San Diego.

A year later we arrived at Pearl Harbor and I'remember the night we entered and the sight of over 100 ships with their search-lights on. It was something to see. In May of 1940 the fleet received orders to remain at Pearl Harbor indefinitely and ironically six months before the attack, the Pacific fleet was required to have ammunition ready besides all guns.

On December 5, 1941 we received orders to return to the states on December -8th. The attack on Pearl Harbor changed all that.

After a "luscioust" breakfast of hash and soft boiled eggs, I went on watch at 7:50 a.m. for the 8-12 watch shift. I happened to hear some planes overhead. The first two planes I thought had practice bombs, but when the third plane hit the hangar, I knew something was wrong. Then I saw the orange- ball designating the Japanese symbol of the Rising Sun on the plane. Then all hell broke loose!

Anchored on the Pearl City side of the naval air station, you could see in every direction. 'Eventually a total of 353 Japanese planes were to come, with 180 arriving in the first wave, from 7:55 a.m.-8:40 a.m. These consisted of fighters, torpedo planes and high bombers. We had thought it was all over, but at 8:45 a.m. a second wave of 173 more planes came in.

Since it was a Sunday, many men were off on liberty, and none of the ships had a full complement. To fight back we used what we had available, pistols and guns. My job was to be a first loader on the four inch mounted guns that really could not be used for aircraft. The final blow was all over at 9:45 a.m. Anyone who says they weren't scared is lying. It was one hour and 50 minutes of hell!

The U.S.S. Medussa, I say, was the first ship to fire at the Japanese. She was two ships away from us. Our ship was third from the last out of the harbor and the first ship back to sweep. And there was approximately four to five inches of oil on the water in the harbor to clean.

All the ships were lined up proving ineffective for firing, but who would think the Japanese would come 6,000 miles to hit us. In addition to their planes, the Japanese also had five subs which carried midget subs. The U.S. did not have a carrier at Pearl Harbor when the attack occurred. Though our carriers.were out, they never chased the Japanese and I never understood why.

The U.S.S. Nevada, a battleship, started out after the Japanese. Fortunately the skipper beached her when she became damaged, and the channel was left open. If the Japanese had waited till the Nevada got into the channel before striking, she would have blocked the whole harbor.

Extensive total damage occurred to the following ships: The Arizona was sunk when a bomb exploded, and to this day 1177 sailors and marines are entombed. The Oklahoma was overturned, the California sank straight down and the Utah, a converted battleship, with 54 men aboard was completely lost. The navy lost 2,008 men, the army 218, and the marines 109, bringing the total American servicemen killed to 2,335. 1,143 service- men were wounded, 68 civilians were killed and 35 were wounded. The army lost 96 aircraft and had 128 damaged, the navy lost 92 aircraft and 41 damaged.

Pearl Harbor reunions have been held since 1966. I attended one in 1971 and again in 1976. The sad part is when you go over to the Arizona Memorial to pay respects to the men entombed there.

Early years as an immigrant to the United States and to Concord,
Velina Bregoli.

I was born in Italy in a small town near Bologna, and in 1914 I came to this country at the age of 3. I had never seen snow and when I stepped off the train in Concord, the conductor was taking me off and I was lifting my feet up because I didn't want to step in the white stuff. At that time in order for immigrants to come to this country you had to have a sponsor or someone to come to. My father, Ruggero Bregoli, had come earlier; he came when I was only 9 months old. In those days it was really hard. You had to find a place to live, find work, pay rent, send money to my mother, Clerice, for my sister, Rina, and I, and at the same time save passage for the three of us to come. Unfortunately my sister was sent back with my grandparents to Genoa because the authorities said she had an eye infection. Later, several times money was sent to her but the money never reached her. At age 16, she decided to stay in Italy. The fare for me was $10.

We lived at that time on Belknap Street at the end of what was called Brennan's Block. My father had everything all set and my mother said it was just like a queens. We were among many Italians and Irish, who had settled pretty much in what we called "back of the depot". We went to St. Bernard's Church. There was no way of getting anywhere except by walking in those days. I remember the trolley cars that came through town up Sudbury Road, Thoreau Street, and up Main Street. That was as far as we went. This was way back.

November 11 as a holiday was very familiar to me because that day was St. Joseph's day. It never passed without us having roasted chestnuts and playing games and cards. One of the games was tombula, which is now bingo in America.

Christenings were another big event the Italians always had. Everybody was invited. I can remember my christening because I was christened for the second time with my sister, Mary, and my brother, Come. My father said as long as we're christening those two let's put Velina in because she was christened in Italy. I can remember walking down to church because I was about 6 or 7 years old. But I remember the party most because my mother had baked a huge pan of baked apples with the stems still on them, and all the children, of course, would go and get one of these apples.

The menfolks always had on Sundays and evenings in the summer bocci games and horseshoes, which were done with the real horseshoes that they got at the blacksmith's shop.

Then I can remember coming home from school one day from either the first or second grade on Belknap Street and up at the end of the street, it was so exciting, the circus had come. We all had to go up and see that.

Later on they had a swimming hole at the end of Elsinore Street and Belknap Street where the boys went.

On Cottage Lane I remember animals coming by train being transported from one place to another and they would put them on a side track. Mostly cows, and as you know cows had to be milked so they would ask the neighborhood people to bring kettles and pails to milk the cows and we got the milk.

The winters were very severe, I don't ever remember snowplows when I was a little girl, but they had pungs that went over the snow. The town had them and we used to hop on to go off to school in those. These were horsedrawn pungs. The snow would be so deep that I can remember on Cottage Lane the snow on the roof was just as deep as it was on the ground.

Coming from a poor family we had very little and I wanted a sled so badly but my father said there just wasn't the money for it. So one day, he came upstairs having been downstairs for many nights and he said "Well, here's your sled", which he had made for me out of beef ribs he had brought home from the butchers. I was so embarrassed I wouldn't think of taking that sled. He said "all right, don't".

Sundays we always went down Nashawtuc Road because the river overflowed and there was always skating there and he goes down with the sled. I stayed way behind, I wouldn't even let them know that he was my father. He gets down there and he sits on this sled with his two poles, he had a ball, and every skater hung on to him. It was wonderful!

My father was a gardener all his life for the wealthy families of Concord, and in the early days they took care of the furnaces because everything was coal furnaces, and they would stoke them morning and night, real early morning. He worked awfully hard.

I wasn't able to continue school being the oldest of an immigrant family, we had to stay home to help. I was working with the Herbert Hosmers at the time. I went 7 or 8 years without missing a single night to Americanization classes. I took an English course that the state provided. It was a lot of fun. Many of the people of Concord were awfully good to us. The Daughters of the American Revolution presented each one of the women who became an American citizen with an American flag. Mrs. Hosmer entertained a group at luncheon or tea. She brought us one year to the Antiquarian House. Mrs. James at that time always had a party for the Americanization classes. We used to put on skits about the immigrants, about coming to this country and being the melting pot. We used to have a real full house for those skits.