For life-long resident, Edith Bailey, born on Commonwealth Avenue in 1902,
a step back to the first three decades of this century is an easy walk to take. Bailey, who loves to reminisce,
can bring the commercial life of West Concord back with special vividness. 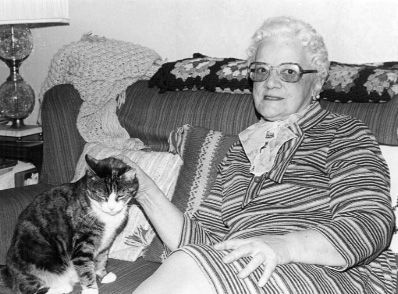 It was an era when it was commonplace for an owner of a store to live with his family in the back or above his business. The stores offered basic services, but it was the presence of manufacturing that distinquished the commerical life of West Concord, then called Concord Junction, from its counterpart in Concord Center. Ever present in my reminis- cences is the destruction caused by fire.

By the time I was born, Warner's Pail Factory had ceased manufacturing and was practically a ruin. The bridge along Commonwealth Avenue where it was located, serves as my starting point. Opposite the Pail Factory had been a canning factory, which became a laundry and later burned. Purchased by Dan Hayes it was converted to the Concord Garnett Mill, which processed recycled wool and is the present site of the Leather Shop.

A great open space was followed by a long building from Commonwealth Avenue, back towards the river, which housed a general store owned by Loring Fowler in the front and attached to it was a livery stable with a blacksmith in the back. This too was totally destroyed by fire one night.

Then came the double house, which is presently occupied by Jones Upholstery and which was originally a barn built for the blueine company though never used. A double house was made out of it, and that's where I was born.

The next building where the beauty shop is now was a bakery, where the owners lived over the store. The first people I remember owning the bakery was Arthur Adams, who we called peanut because he was such a little fellow. John Donovan and Frank Leighton were later owners, then it was abandoned as a bakery and moved to another location.

Where the West Concord 5 & 10 is now was the Bartolomeo block owned by Sal Bartolomeo, who ran a big fruit store and lived with his family in the back. On the second floor was Harry Fritz, the tailor, who also used the rear of the store for his family's living quarters.

An empty lot followed and then came a dry goods store where the auto parts shop is today. It was owned by Messrs. London and Erdang and was like a department store. I worked there when I was in high school.

Next to this, separated by a half lot was the Association Hall building, which burned in September, 1903. This fire connects with family stories about John Fitzgerald, the father of Rose Kennedy and mayor of Boston, who lived for a time in West Concord along Main Street, and was a politician who used to chase fires. My father had a lot of stories to tell about John Fitzgerald. He always went to all the fires around and got into difficulty with the firemen. He and the local firechief definitely didn't get on.

When the association building was rebuilt, the first floor housed the Rexall Store run by C. Hayden Whitney, located next to the post office which still stands at its original location. On the second floor were offices, including one occupied by the dentist Wendell Davis, and another where Mrs. Leland taught piano lessons.

On that second floor was Association Hall, a mainstay of the social life for the West Concord community. Association Hall was where we saw movies, attended dances and minstrel shows. That was the whole core of our social life. On the third floor was the Odd Fellows Hall which was used for all the local fraternal organizations. Today that third story no longer exists.

The thriving blueine factory was set back on Beharrell Street where the Minuteman Press is now. Blueine for the family wash was widely used at this time and a brisk mail order business made it possible for many young people to find part-time work there after school and in the summer. In front of the blueine factory, at the site of the Acadia Company, was one of the very first garages built in town.

Starting up on the other side of Commonwealth Avenue, across the street from the former Pail Factory, was the same small town square. An old red house was torn down to make way for a garage, now the Plymouth Chrysler dealership. The house on the corner of Bradford Street and Commonwealth Avenue was built for the Whitney family. And that is where I used to push Otis Whitney around in his baby carriage. From the point of view of my childhood all these buildings are fairly recent ones.

In back of this was the Allen Chair Company, now Bradford Furniture which must have been built about 1908. I know we played over there as children when it was being built, though I'm sure my folks never knew about it because they never would have let us.

Along Commonwealth Avenue came the Bryden House which has been used for offices. Where Phillips Hardware Store is now was the bicycle shop whose owners lived above the store. Then came the Elmwood Hotel which has since been remodeled into apartments, with additional apartments made from the adjoining Young's Meat Market and Waite's Shoe Store.

Where the Gail Mark Shop is now stood Adams and Bridges Grocery. The Hay Shoe Store next to it is located in the addition that Loring Fowler built on the end of that building when his general store burned across the street. For a time, Mr. Robert Carter Sr. had his furniture store there before he built the building on Main Street.

I can continue along Main Street telling about a boarding house, luncheonette, small grocery store or ice cream parlor and barber shop. I remember when the Harvey Wheeler School was being built in 1918 and my father, Edward A. Comeau, was given the task of moving the nearby livery stable across the railroad tracks to Commonwealth Avenue. My father ran a stonemason and construction business and he chose Palm Sunday as a quiet day with far fewer trains to cope with and successfully moved the livery on wooden rollers to the site where Edwardsen and Soberg Mobil Station is located.

The three-story building located on Main Street, where the Hudson National Bank is now, once housed Mike Kelley's barbershop and Charlie Hogan's ice cream parlor. It was totally destroyed by fire on March 17, 1932. It is a fire that stands out in my memory for it originated in the fire station itself, where the Village Cleaners now stands, and the fire-fighters from Acton were the first to come to the rescue.