There are seven remaining residents of Walden Breezes. We are talking with four of them, all of whom have been long-time residents of the mobile home area.

Catherine Bailey — I originally came in 1954 and moved in what was known then as the annex. At that time only half of the annex was built. We saw the other half being built. Then we moved away in 1956 to Baltimore where my husband's work took him, and when we moved back in 1959, we still lived in the annex. We lived there for 18 years. Right after the state took over, we asked to buy here and we moved to the main part which is this section here. The state took over about 19 years ago. Previous to the state taking over, the owner Jimmy Sliman would not let anybody else move in here simply because he knew he was going to sell.

Christina Harvey — We had to move and we couldn't find a house so a friend that my husband worked with mentioned about these trailers for sale over in West Roxbury. We looked at it. It was very small; it was only 28 feet but we liked it. We decided to buy, but then of course, where were we going to put it? We knew the owner of the Willow Pond Kitchen at that time and he recommended looking here. Well that's how we happened to come here. Later we moved away, but we still liked it here and so we came back. By that time Jimmy was selling trailers or mobile homes and we wanted to buy a larger trailer.

Flora Haskett — I was an LPN at Metropolitan State Hospital in Waltham and my husband was retired. We were out riding one day and we rode by here. My husband said, "Would you like to live in anything like this?" I said, "I'd love it." We were living in an apartment with somebody upstairs, somebody on the sides, and it just wasn't by yourself. My husband got right out of the car and bought it, right then and there. For a year we lived down in the front because there was no place to put us in here, it was all filled up. Then the man who lived here was an alcoholic and was disturbing everybody so he was put out. So Mr. Sliman asked if we would like this plot. There was a tree right there and my husband said, "If you take that tree out, we'd like it." And so we've been here ever since. My husband died 12 years ago.

Phyllis Harvey — We were up at the Colonial Inn one day in 1967 for our anniversary and just riding around, and my husband stopped and spoke to the manager and we looked around and we moved in two weeks later. A few years later my brother-in-law died and my sister moved up and took over my trailer and we got a bigger one.

Christina Harvey — I first went out to Ohio and visited my sister-in-law who had a mobile home and both my husband and I really enjoyed it and that's when we first started thinking about it. We probably didn't make a move for about six or seven years after that. We didn't come here first. We went to different places that had mobile homes. I worked in Boston and I wanted to be sure I could commute all right. Finally, we came up and decided to stay and I commuted for 13 years until I retired. I used to have a real nice yard there but they've put in so many trees and the roots have come up now. We had a lot of good cookouts and a lot of good times there. When there were a lot of us, we used to have cookouts and very good times together.

Catherine Bailey — At one time there were at least 72 units. Some of the spaces were empty and at that time the owner would allow transients to come in. When we lived over in the annex, there was an empty spot next to us, and most of the people were very interesting people to talk to and came from a lot of different places.

Flora Haskett — There used to be a roadside stand here years ago that sold hot dogs and ice cream and they had chairs outside. The men that were retired liked to sit up there and watch the ladies go by in their bathing suits. He did sell the best hamburgers and the best hot dogs. That stand was absolutely spotless. and he and his wife lived upstairs. There was another building near the food stand that was called The Golden Pheasant. It was a dance hall. I think that was before any of us came here.

When we were kids years ago, we always went to Walden Pond on Sundays, and they had animals at the end of the park there. It was like a little zoo, but that was gone before we all moved in.

Comments from all four — In the 1950s when we came here, this area was beautiful. Everybody kept up their lawns and gardens. If you let your lawn grow, the owner would send his son up and mow it and clean it up and charged you for it. Everything looked nice all the time. And there was not the traffic or crowds like there is today. When we moved in here, the people were probably in the age bracket of middle 50s and older. We were all beyond the baby stage when we moved here. There was one young couple who lived here but they had a baby and left.

We've always seen a strong interest by tourists in Walden Pond, but our interest has always been in our community here as a resident, and secondly, that the pond was historical. We didn't go over to the pond too much. My husband used to go fishing over there, but it wasn't the pond that really attracted us. This place was kept so nice. We always had bird feeders out and fed the birds, mostly in the winter.

The rule in the early days was always no children and no pets. Later you could have a cat but not a dog. We had rules and regulations that you were supposed to abide by. He was the boss and owned it so we did. The rule when the state took over in 1976 was you could live here as long as you wanted but nobody new could come in.

We've seen it dwindle down to seven people, and I liked it better when there were a lot of people in here. It was more fun and it was nicer. We all knew everybody. We would have some spontaneous cookouts. We were younger and we enjoyed it more. Now there are not many of us and we have more to do. We do more now around the grounds because we want it to look nice. The state doesn't do as much as Mr. Sliman used to do, so we try to do a little more to try to make it look nice. When Jim Sliman sold this place, he took us all into consideration, and he wouldn't sell it to the state unless they agreed to give us life tenancy. I thought that was the most wonderful thing anybody ever did for a group of people.

We've heard several things as to what the state will do with this after we're all gone. One thing was they would turn it into a park for picnics and so forth. Then there was some talk about moving route 126 through this ground. But we don't know what they have in their minds.

I think the spring time is my favorite time of the year here because everything is starting to grow again.

I'll say the spring and the summer, except for these hot days. Although we most always get a pretty good breeze.

I like the fall because of the color. I notice none of us said the winter.

In winter of course you can't get out as much as you'd like. All the snow and the shoveling. Years ago there used to be some boys who would come around and shovel snow, but now there are no boys around here to do that.

We don't feel a part of the town of Concord. I could count on my fingers the times I shopped there except for the Stop & Shop and CVS. I shop in other towns like Acton and the malls.

I saw a woman in Nova Scotia one time and she said, "From the way you speak, you must be from Massachusetts." I said yes, and she asked me what part. I told her the trailer park and she said, "Oh, really" and she walked away from me. That was the end of our conversation.

The first time I went to the Stop & Shop was with another lady from here and she introduced me to someone, and that woman said, "Oh, you're one of the gypsies?" I'm still here and I thought gypsies moved around.

People don't realize that we have more storage space than many homes. They come into your place and see the storage space and comment that they don't have that amount of storage space. And they probably paid a pretty price for their house.

The hospital where I worked would get a lot of foreign doctors. We were sitting around and talking and a doctor asked me where I lived and I was explaining to him about my mobile home. He said "Where do you go to the bathroom?" For a minute I was stunned and I said "Oh, we go out in the woods." Do you know he believed that for the longest time!

We didn't generally join any clubs or many activities in Concord until we got older, and then we joined the senior citizens group in West Concord. We meet in Our Lady's Church once a month. We go up to the Harvey Wheeler Building on Wednesdays and have a nice lunch for $2.00. Most churches put on the lunches and then we play Bingo afterwards. It's nice to get out and see other people and talk with other people because there are so few of us here. 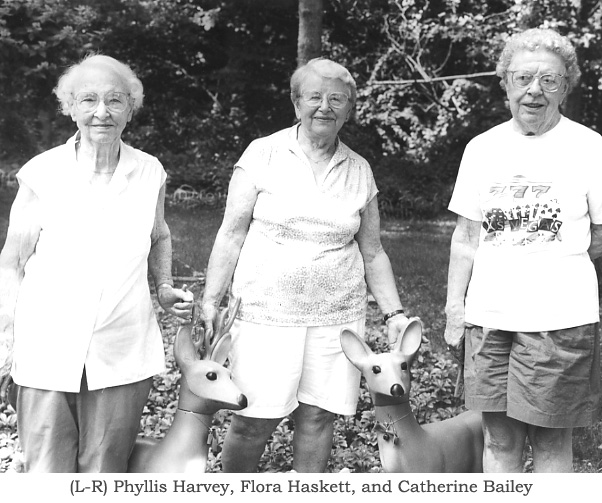