This was Frank Palumbo's last year farming. Present at the interview is John Bemis, age 47, of Liberty Street, an organic farmer who farms the Hutchins land on Monument Street, a legacy of his grandfather, Gordon Hutchins. An admirer of Frank Palumbo, John initiated this interview. He credits Frank Palumbo's generation of Italian farmers with an invaluable contribution to the town's agricultural history. 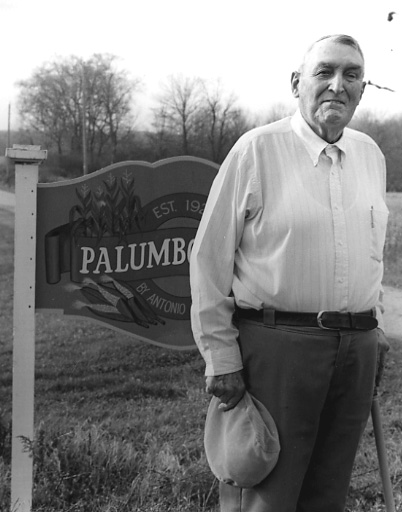 My grandfather was from Sicily and he used to work where they processed the olives. My father was a young man and he was sent away to Watertown, New York to an uncle who's name was Castro. My grandmother was a Puccia and Mrs. Castro was her sister. My father couldn't speak any English but they put him to work selling fruits and produce on the road. This must have been in the early 1900s but I don't know exactly when. He did that for quite a while then his aunt, Mrs. Castro, told him he should go to Lawrence, Massachusetts that Vincent Puccia had about four or five daughters. So he came to Lawrence. You know in those days the parents had a lot to say in who you married. So he married one of the girls.

My grandfather Puccia was in the banana business with his brother Frank. They were doing a good business selling bananas out in front of the mills in Lawrence. In those days if you made a $1,000 that was good money. My father helped my grandfather for a while but then he wanted to go back to Watertown. So he did and he got a farm of his own and started growing things.

Then in 1925 we came to Concord and saw four or five different properties. I wish he had bought the one up in Lexington, but he finally bought this one. I was already in Boston myself because they had shipped me to Boston to work in my two uncle's grocery store in the North End. I was only 14 years old at the time.

My Uncle Sam came to Watertown and worked with my father selling the produce on the road. They had all the hotels, the hospitals, the barrooms, a whole route where they used to sell their produce. But then my Uncle Sam and Uncle Joe came back to Boston to the North End and opened up a grocery store. My uncle built a brand new building on Hanover Street near the European Restaurant and he lived upstairs. He had recently gotten married. I slept on a mattress on the floor. My mother every year wanted to come back to Lawrence. That's why they sent me here.

Finally my father decided to come back here. He looked at several properties. The Arenas were over in Maynard and they sold produce at the mill too. They saw a sign here so he bought this. Parks owned all this land, and then it was split up between his two daughters into 17 1/2 acres each. So we bought this 17 1/2 acre part. But my father really didn't want to come back here. He was doing well in Watertown as far as he was concerned. But we moved here in 1926. He wanted me to come back to the farm so I did.

He then bought a Model T Ford in 1926. We had a little stand and we did well. We used to go to Boston for a few things with the Ford. I don't know what happened but he wasn't happy here. So I lost my dad in an accident in 1931, and I had to carry on with seven brothers and sisters and my mother and we had a good mortgage. But what are you going to do, you have to carry on.

We used to grow mostly small crops, beets, scallions, celery, sweet chard, carrots. I leased greenhouses over in Woburn and other places. We used to bleach celery because if you didn't get the green out, it would be bitter. The celery today is better and not bitter.

I farmed Nine Acre Corner at the Davis Farm and I had a piece at the Andy Boy Farm. I grew lettuce down there on the Hallett Farm and the Davis Farm. I had seven acres of celery. At the Waltham Field Station they asked me to enter some of my celery in a contest and my celery got the prize. This was in the mid-1950s. The First National Stores then wanted to buy my celery and paid me a little more for it and bought everything I had.

During World War II we had prisoners of war working in the fields at the Andy Boy Farm down at Nine Acre Corner. We had 30 of them, 15 worked in the celery and 15 worked in the broccoli. They were good workers.

The Andy Boy Farm introduced broccoli to the country from out in California in 1924. Steve went to San Jose, California and Andrew stayed here. He was raising mixed stuff like escarole, chicory, fennel, not so much celery, baby peas but they finally got going. Andrew was here and there was a big frost here and the celery got frozen, so they took the celery from here to there. Broccoli and celery were the two big products of the Andy Boy Farm. Now they grow rutabaga which is mustard green. It's from the turnip family.

I farmed some of the land on Bedford Street that belongs to the town, some of the old Asparagus Farm, and some of Joe Dee's farm. I also farmed on Monument Street at Peverill Petersen's farm. I've been there 19 or 20 years. I used to farm about 50 acres of land on East Street in Lexington on the Burnham farm. I could have bought that farm from $30,000. I grew carrots and parsnips there. But it ended up being bought by Mark Moore, the house developer, and that's how he got started. I might have been in the retail business in there and Wilson Farm might not be as big as they are now.

When I was in North End at a young age, I met the people or the contacts to move vegetables in Boston. I'm a promoter. We sold to the Stop & Shop and the First National Stores. But there's room for everybody. When the sun shines, it shines for everybody and when it rains, it rains for everybody. That's how you got to figure it. I've been rained out and flooded out. I got flooded out in two hurricanes at Nine Acre Corner.

The lettuce, carrots, and the celery lasted up through the '50s and '60s. I started raising corn in the '60s over at Kenney's farm. I grew carrots through about 1965. Then we used to grow cucumbers. You couldn't make much money and do it the way we used to do it. When they had the fire over at the Kenney's, that was it, and that was about 1962.

I sold my land to the park service in 1966 and I made a mistake. I thought I was doing something good for the public, but we didn't get a deal like everybody else did. I got $50,000 across the street and I got $38,000 for this. The park service was going around buying up land around here. A few others sold too like us. The offer seemed good because you weren't paying much rent.

I wanted Hutchins Farm and I kept asking John's mother to sell. She kept saying she would think about it and now John and his brother are farming it.

John Bemis - When we started it took a long time for us to be accepted by Frank and the others as farmers. We weren't raised as farmers. We've learned a lot from Frank and Joe.

Frank- We tried to tell them but they're organic. Organic is probably all right but you can't be 100%. I know there are some chemicals that are no darn good and they should have been taken out a long time ago, but I told them the federal government should get in and make what they've got to make.

Bemis - Well, there are good farmers and bad farmers, and the Palumbos may have used chemicals but they've used them just the way they should be used.

Frank - I wish I was young because I think there is a place for farming here and do the right job like we used to do. Now the asparagus comes from Peru. We give everybody in other countries the know-how and then they give us the jab. We're the ones that created the wheat and the rice and poultry and dairy.

My brother Joe was a partner with me in the farm. He raised his whole family here. But I'm going to stop farming after this year. 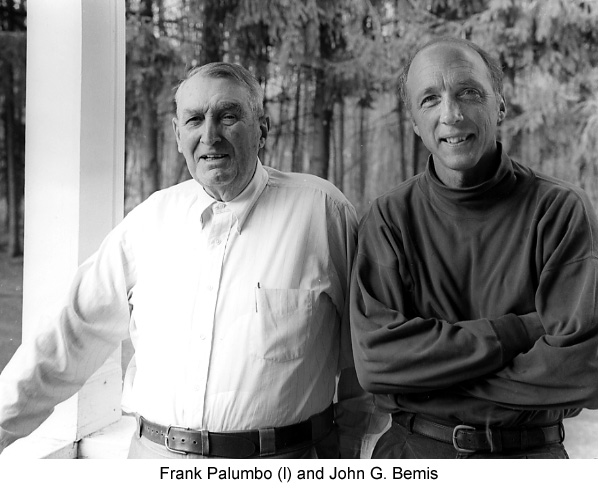 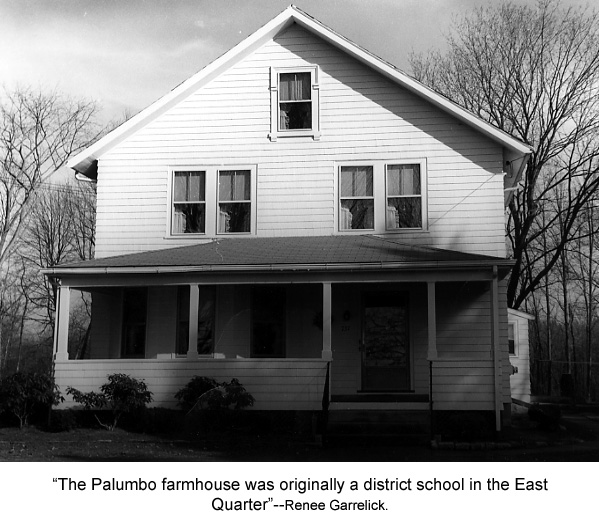 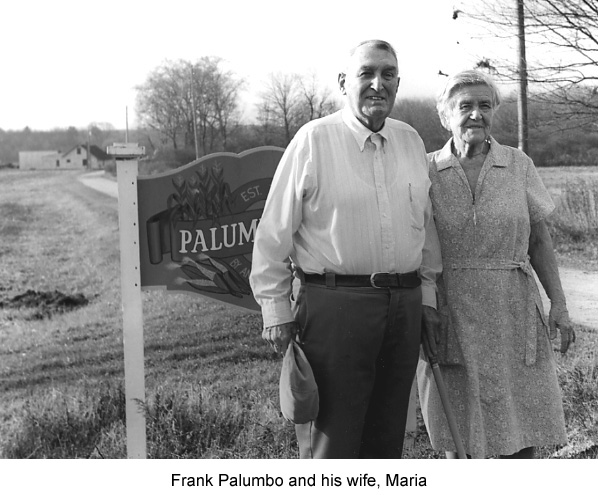