This webpage is based on a document compiled in 1965 by Ruth Robinson Wheeler (original: typescript with manuscript additions). The transcript was prepared from a copy in the Concord Pamphlet Collection, William Munroe Special Collections, Concord Free Public Library (C.PAM.77 Item 10).

Users please note that additional markers have been installed since Mrs. Wheeler compiled this list in 1965 and that the landscape (including street numbering) has changed in other ways, as well. 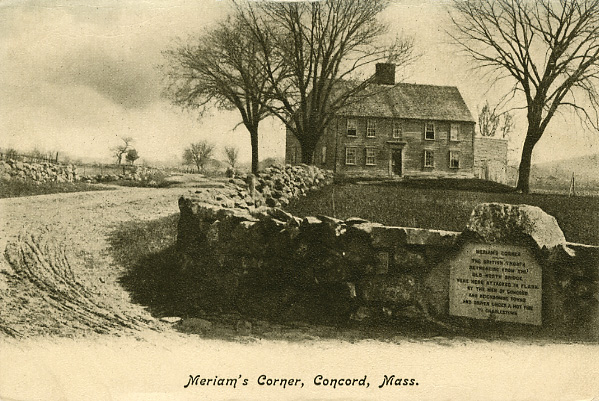 Historical Markers erected by the Town in 1885 to mark the 250th anniversary of the incorporation of Concord:

On a panel cut in Egg Rock at the junction of the Assabet and Sudbury Rivers:

On a slate in the wall of the Hill Burying Ground:

On a bronze plate set in granite on Lowell Road (modern research inclines to the belief that this marker should be near the Jethro’s Tree marker):

HERE IN THE HOUSE OF THE
REVEREND PETER BULKELEY
FIRST MINISTER AND ONE OF THE
FOUNDERS OF THIS TOWN
A BARGAIN WAS MADE WITH THE
SQUAW SACHEM AND THE SAGAMORE TAHATTAWAN
AND OTHER INDIANS
WHO THEN SOLD THEIR RIGHT IN
THE SIX MILES SQUARE CALLED CONCORD
TO THE ENGLISH PLANTERS
AND GAVE THEM PEACEFUL POSSESSION
OF THE LAND
A.D. 1636

On a panel in a stone on Elm Street west of the river:

On a bronze plate set in granite on the west side of Monument Square.:

On a stone on Liberty Street by the Musterfield:

On a stone at the corner of Lexington and Old Bedford Roads:

On Willard Common 1/2 acre at top of Nashawtuc:

On Route 2a at Concord - Lincoln line:

“It is ordered, that there shalbe
a plantacion  att Musketaquid,…
& the name of the place is changed,
& hereafter to be called Concord.”
Order of the General court Sep-
tember 12, 1635.  This plantation
was the first inland settlement in
New England.

On Route 2a east of Grapevine Cottage:

Westward to the meetinghouse
along the sunny slope of this ridge
the settlers of Concord built their
first dwellings.

This short stretch of street still
known as the Milldam was the site
of an Indian fishing weir and was
laid out along the dam built soon
after the settlement of the town in
1635.
At Monument Square corner Milldam

Near this spot stood the ancient oak
known as Jethro’s Tree beneath
which Major Simon Willard and
his associates bought from the
Indians the “6 myles of land
square” ordered by the General
Court for the plantation of Concord
September 12, 1635.

At Monument Square erected by the Town:

The following is an incomplete listing:

On Emerson’s grave two lines from his poem "The Problem":

The passive Master lent his hand
To the vast soul that o’er him planned.

See under "Statues in Concord" for Melvin Memorial

God wills us free, man wills us slaves,
I will as God wills; God’s will be done.
Here lies the body of
JOHN JACK
A native of Africa, who died
March 1773 aged about sixty years.
Though born in a land of slavery,
He was born free.
Though he lived in a land of liberty;
He lived as a slave;
Till by his honest though stolen labors
He acquired the source of slavery,
Which gave him his freedom:
Though not long before
Death the grand tyrant,
Gave him his final emancipation
And put him on a footing with kings.
Though a slave to vice
He practiced those virtues
Without which kings are but slaves.

The earliest graves are unmarked.  The oldest stone is dated 1677.  The Liberty Pole stood here. The Powder House about 1802

Main Street Burying Ground [South Burying Place]:
Probably used by settlers in the South Quarter before a good road went over the Milldam. The oldest stone 1697.

Still standing in Concord are 18th century houses built by descendants of the first settlers on the farm lands which are of interest to their present day descendants. These are all unmarked as yet but would be of great interest to many tourists.

Brooks  Lexington Road and on edge of Lincoln.

Flint  near Flint’s Bridge and in Lincoln.

Wright Tavern owned by First Parish  Built in 1747. Building in 1775 headquarters of the British April 19.

Dr. Samuel Prescott house here lived the young doctor who brought to Concord the news that the British were coming.

Reuben Brown house built about 1667 by Peter Bulkeley Esq. Governors Assistant and agent in London of the Bay Colony.  Home of Reuben Brown in 1775 used to house prisoners taken that day.

Monument Square:
Masonic Hall contains the room used as a town school where Thoreau taught for one term.

Bullet hole house where stores of salt beef and fish were hidden April 19, 1775 and the British bullet just missed the owner Elisha Jones.

Liberty Street:
Major John Buttrick house Leader of the Minute Men who gave the order to fire which began the War of the Revolution.

Barrett’s Mill Road:
Hepburn house - a square brick Federal house. Widow Brown’s tavern where the British stopped on the way back from the Barretts’.

At Rt. 2 traffic circle, removed:
Col. John Cuming house.  He led troops in the French and Indian war.  Presided at town meetings which planned the drilling of Minute Man and the storage of military supplies here and at his death left to Harvard College a legacy which founded Harvard Medical School.

Wood Street:
Ephraim Wood house searched by the British at the South bridge.

Main Street:
Joseph Hosmer House.  He was adjutant at the Bridge The house includes a seventeenth century part belonging to Obediah Wheeler whose wife was a daughter of Resolved White of the Mayflower.

Dovecote Cottage. One of the Alcott houses described as Meg’s house in “Little Women.”

At the North Bridge:
The Minute man (erected in 1875) by Daniel Chester French Symbol of American readiness to defend Liberty used on millions of war bonds and war savimgs stamps.

In Sleepy Hollow Cemetery:
The Melvin Memorial by D.C. French in collaboration with the architect Henry Bacon who later did the Lincoln Memorial together  Figure of a mourning Victory wrapped in a flag holding a branch of laurel. Erected by James C. Melvin to honor his three brothers, all of whom died in the Civil War, 1909, at Andersonville,  Ft. Albany and Petersburg.

Busts of Emerson, Thoreau, Hawthorne, Bronson Alcott, Louisa May Alcott and others. Concord alone of American towns has three of its citizens honored in the New York University HALL OF FAME. Louisa May Alcott by Concord born sculptor Elwell.

In the Selectmen’s Room, Town House Concord:
MEMORIES OF ANTIETAM painting by E. W. Roberts. Portrait group of Civil War Veteran. Presented to the Town in 1928.

MAJOR JOHN BUTTRICK
FROM THIS FARM LED
THE PROVINCIAL MINUTE
MEN AND MILITIA DOWN
TO WIN THE BRIDGE HELD
BY THE BRITISH FORCES
APRIL 19, 1775

Erected by the  Thoreau Society 1942:

In the parking space below the roll of honor grounds:

On a fieldstone brought from the farm where Thoreau was born and placed above the stone hearth excavated at the site of his cabin at Walden:

Beneath these stones is the hearth:
“Go Thou my incense upward “from this hearth”

On a bronze  tablet at the Thoreau cabin site erected by the Middlesex County Commissioners:

In 1845 Henry David Thoreau built
himself a hut at this place.  For over two
years he lived here in solitude writing and
gathering information from which two books
were published during his lifetime.  These
books were Walden and “Week on the Concord
and Merrimack Rivers”
He was born in 1817 and died in 1862.
plaque near flag pole

Lexington Road in front of First Parish meetinghouse, erected by the Town:

On Monument Street near the Carlisle line:

William Munroe
A textile merchant of
Boston and London
built this Library
and gave it
with funds for its maintenance
and extension
for the use of the inhabitants
of his native Town.
- - -
Born and Died in Concord
1806-1877
- - -
Original Library 1873
Stack Room 1917
Building Remodelled and Enlarged 1933

Erected in 1910 at his own expense by Judge Peter Chardon Brooks:
On the grave of the British Soldiers - Battlefield lines by Lowell

HERE
ON THE 19TH DAY OF APRIL, 1775
WAS MADE THE FIRST FORCIBLE RESISTANCE TO
BRITISH AGGRESSION
ON THE OPPOSITE BANK STOOD THE AMERICAN MILITIA
HERE STOOD THE INVADING ARMY
AND ON THIS SPOT THE FIRST OF THE ENEMY FELL
IN THE WAR OF THE REVOLUTION
WHICH GAVE INDEPENDENCE TO THESE UNTIED STATES
IN GRATITUDE TO GOD AND IN THE LOVE OF FREEDOM
THIS MONUMENT WAS ERECTED
A.D. 1836

HOUSE AND FARM OF
COLONEL JAMES BARRETT
COMMANDING OFFICER
OF THE MIDDLESEX MILITIA
ON THE MORNING OF APRIL 19, 1775
THE BRITISH MARCH FROM BOSTON
WHICH RESULTED IN THE OUTBREAK OF THE REVOLUTIONARY WAR
ENDED HERE WITH THE SEARCH FOR MILITARY STORES.
GUN CARRIAGES FOUND BY THE LIGHT INFANTRY
WERE BURNED