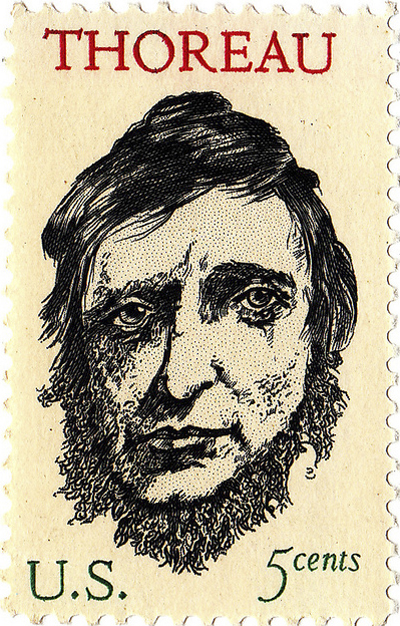 BIOGRAPHY:  Massachusetts resident Robert Wilde (alternate spelling—Wild) was an active member of the Thoreau Society from the 1950s through the 1970s. He was nominated to the Executive Committee in 1974. A sculptor, Wilde created a statuette of Henry David Thoreau in 1950, copies of which were advertised for sale. The Thoreau Society Bulletin of Summer 1983 notes that fellow member Roland Robbins read a memorial tribute to Robert Wilde at that year’s Annual Gathering.

Folder 2.  Survey map, pamphlet, order forms:
Materials include: one reproduction of Thoreau’s survey of Nathaniel Hawthorne’s estate; one pamphlet describing a Thoreau exhibition at the Pierpont Morgan Library in NYC; two order forms for publications regarding Thoreau and Transcendentalism.

Folder 4:
Materials include: articles about Patriots’ Day festivities, Walden on the 100th anniversary of Thoreau’s birth, and the controversy over the Thoreau commemorative stamp designed by Leonard Baskin.

Folder 5:
Materials include: an advertisement for the Emerson Society Quarterly; Concord town meeting notes and a March 1960 map of the town of Concord regarding the establishment of historic districts  and a Historical Commission in Concord; a typescript history of the Concord Free Public Library (reproduced).