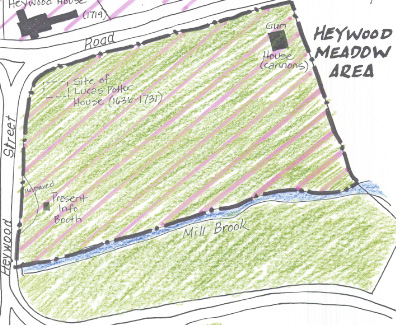 HISTORY: The Heywood Meadow Stewardship Committee of Concord Massachusetts, appointed by the Concord Natural Resources Commission in July 2000, was charged with the rehabilitation of Heywood Meadow and its long-term stewardship. The goal of committee members, including Sara (Win) Wilbur, was to restore the property to reflect its historic and agricultural past, from its early settlement in 1635 through Concord’s literary renaissance in the late 1800s. From 2000 to 2005, the committee’s efforts resulted in the removal of nonconforming structures, the planting of heirloom apple trees, field restoration and the relocation of the Clapper stone to the site. In 2001, the committee applied for the Department of Environmental Management Historic Landscape Preservation Grant, but their proposal was not selected for funding.

Before the entirety of Heywood Meadow was put into conservation, and its upkeep given to the Heywood Meadow Stewardship Committee, there were attempts to develop the property. Most recently in 1995, when a proposal to build a visitor center on Lot 3 was presented to the town. Many residents protested the loss of open space, and two alternate locations were suggested: the corner of Milldam and Monument Square, and the municipal parking lot on Keyes Road. Ultimately, the visitor center was built next to the Middlesex Savings Bank in 2002, and Heywood Meadow was preserved without development.

SCOPE AND CONTENT: Records, 1961-2005 (bulk 1996-2005) include: I. Typed and handwritten Heywood Meadow Stewardship Committee meeting minutes, agendas and notes, 2000-2005 [with gaps]; correspondence regarding the rehabilitation project. II. Materials generated by the committee for the 2002 DEM Historic Landscape Preservation Grant application, 1987-2002 (bulk 2001), including procedure forms and completed application, 2001. III. Miscellaneous materials relating to the history and conservation of Heywood Meadow, including letters, newspaper clippings and other documents protesting the potential development of the site as a visitor center, 1961-1998 (bulk 1996-1998). The series also contains reports evaluating the potential development of a visitor center on Keyes Road, or the corner of Milldam and Monument Square, [1996-1997]. 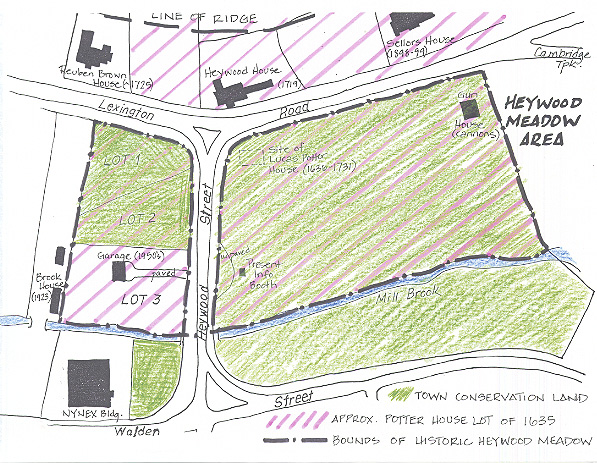