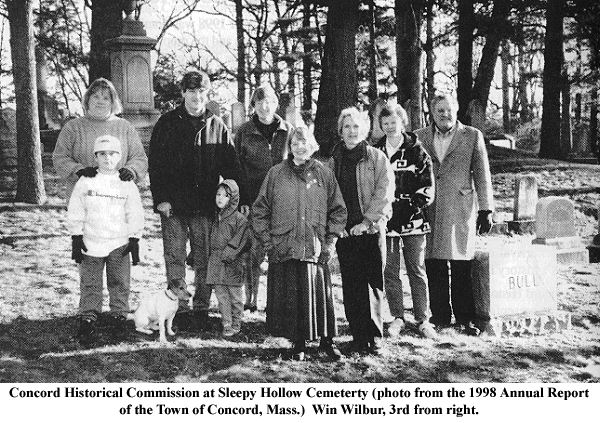 HISTORY: The Concord Historical Commission was formed in 1973 to "identify and safeguard for posterity the unique physical attributes of the town, as exemplified by the various sites, buildings, and other edifices of historic, literary, architectural, or archaeological significance to Concord" (CHC Mission Statement). Longtime Concord resident Sara (Win) Wilbur was a member of the commission from 1995 to 1998, and committee chair from 1999 to 2000. During her years of involvement, the commission prepared the Demolition Delay Bylaw, which imposes a six-month delay for applicants proposing to demolish historic homes and buildings located outside Concord’s Historic Districts, but rated as high priority for preservation. The bylaw was presented to Town Meeting in 1999, where it passed overwhelmingly. Other areas of interest and concern from 1997 to 1999 include the expansion and archaeological survey work done at Sleepy Hollow North Cemetery, the preservation of Thoreau’s birthplace, Heywood Meadow, the widening of Main Street, repair of the bridge on Spencer Brook Road, development of Estabrook Woods, expansion of Hanscom Air Field, and the World War II Memorial.

SCOPE AND CONTENT: Records, 1961-1999 (bulk 1996-1999) include I. General records of the Concord Historical Commission: typed meeting minutes from 1997-1999 [with gaps]; annual budget, financial statements and expenditures, 1998-1999; general correspondence, 1998.  Miscellaneous materials including nomination form for the inclusion of Concord’s Monument Square to the National Register of Historic Places, two full-page newspaper articles concerning an historic Concord home and the Concord Town House, pamphlet from the 1998 dedication ceremony of the Knoll at Sleepy Hollow Cemetery, and undated description of the Historical Commission, 1976-1998. II. Materials relating to the proposed establishment of the Hubbardville Historic District, including photocopy of the Town of Concord’s Historic District Zones from 1961; general correspondence, 1996-1997; article for 1997 Town Meeting; study report prepared by John Althouse on the Hubbardville Historic District, which provides a history of the Hubbard family farm and the studio of Daniel Chester French, 1997. III. Materials relating to the development of the Demolition Delay Bylaw, including general correspondence, 1997-1998; undated Demolition Review with a listing of Concord homes and buildings outside the Local Historic Districts deemed historically valuable.