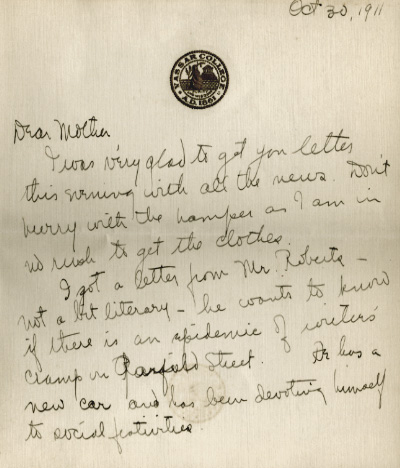 BIOGRAPHY: Ruth Robinson Wheeler (1890-1973) was born in Watertown, Massachusetts, the daughter of George Frederick and Grace Pratt Robinson. She attended Vassar College, graduating in 1912, and pursued further studies at the University of Munich. She worked as a teacher in New Jersey and Connecticut, and later as news editor for the Concord Journal. She married Caleb Henry Wheeler in 1916, and together they had five sons. The author of  books and articles on Concord history (including Concord: Climate for Freedom, first published 1967), she was also active on Concord boards and committees and was a founding member of the Thoreau Society.

SCOPE AND CONTENT: Series I includes letters—several with enclosures—from Ruth Robinson to her mother, Mrs. G. Frederick Robinson, dated 1910-1912, and includes one letter from Ruth’s sister Mary to Mrs. Robinson. Series II consists of a 1912 diary, Series III of one college essay from a Harvard Summer School class on the Psychology of Education, dated July 5, 1913. The letters offer information regarding her school work and social life as well as inquiries concerning her sister, Helen. (Her other siblings were Winthrop, Miles, and Frederick, who are referenced in some of the letters.) Enclosures include two newspaper articles, a debate program and a trunk tag. A note on the college essay states that she did not turn the paper in, as she dropped the course.

Series III: College essay, 1913:
Folder 5:
College essay for a Harvard Summer School class in the Psychology of Education, dated July 5, 1913.  Note by Ruth Robinson Wheeler explains that she dropped the class and did not turn in the paper.