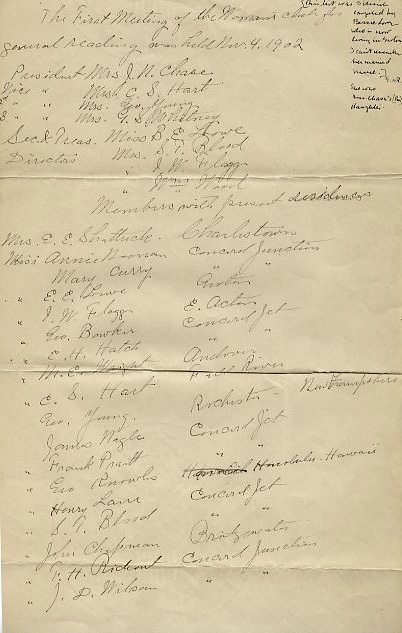 HISTORY: The West Concord Women’s Club was formed on 4 November 1902, by Henrietta Chase, the club’s first president, and her friends with the intent of promoting educational, social and philanthropic issues. Their founding principles were “to be social, to know each other better and to love each other more” which later became “to be open to all, to be social, to broaden our minds, to promote education, and to serve the community.” They met at many locations throughout the club’s lifetime, including the Chase’s home, Association Hall, West Concord Union Church, and the Thoreau School, and had a rotating presidency every one to two years. In the beginning, the club had monthly meetings and a larger annual meeting for the members and their spouses. In 1911, they achieved a membership in the Massachusetts State Federation of Women’s Clubs (MSFWC) and in 1926, a membership in the General Federation of Women’s Clubs (GFWC). Some of their programs and initiatives included rummage sales, performances of plays, puppet sewing projects for the young patients at Emerson Hospital, service visits to local hospitals, the Kenneth Dunn Square conservation project, and raising funds for both donations and their Scholarship Foundation. The club also aided in two war efforts by making sweaters and socks with other organizations. The remaining members merged with the Concord Women’s Club in the early 2000s.

SCOPE AND CONTENT: The collection spans 80 years, from 1924 to 2004, and consists of club meeting books, yearbooks, scrapbooks, press books, photo albums and ephemera. Series I contains detailed books from the club’s meetings, as well as 80 yearbooks highlighting club members and events. Series II contains many scrapbooks in which most of the books begin with the corresponding yearbook, while the contents cover the club’s news and programs. The photo albums in Series III display many of the events the club held throughout its lifespan. Materials in Series IV cover the history of the club, including the first club meeting report (Nov. 1902), the club’s constitution and by-laws, the 85th birthday celebration, community service reports, and scholarship records. This series also contains awards and other ephemera.

SOURCE OF ACQUISITION: Given in multiple gifts by the West Concord Women’s Club.