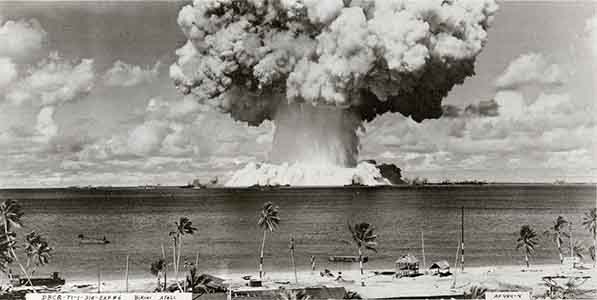 ORGANIZATION AND ARRANGEMENT: Organized into four series: Series I: Ritter Dental Manufacturing Company Notes and Papers (1941-1942); Series II: Submarine Signal Company and Raytheon Company (1943-1948); Series III: "Operation Crossroads" Electronics Group (1946-1947); Series IV: Related Materials (1946-1949). Series are divided into subseries based on subject, and the material is arranged chronologically within subseries with the exception of Subseries I.A and Subseries I.B, which remain in the order in which they were arranged when the papers arrived at the Concord Free Public Library.

BIOGRAPHY: Engineer Wilber Y. Walworth was born on December 17, 1917 in Adrian, Michigan. He grew up in Ann Arbor, Michigan, and attended the University of Michigan, graduating in 1941 with a bachelor’s degree in engineering. His wife, Vivian Walworth, also attended the University of Michigan, earning a degree as a chemist. Following their graduation, they moved to Rochester, New York where Walworth began working for the Ritter Dental Manufacturing Company. After working at Ritter Dental for two years, he joined the Submarine Signal Company in Boston, Massachusetts, where he was appointed a Radar Field Engineer for the U.S. Navy in World War II. He was assigned the rank of Apprentice Seaman and worked to install and maintain the radar equipment on various ships and in shipyards throughout the U.S. Following his service in World War II, Walworth continued working for the Submarine Signal Company through their merger with Raytheon Company in 1946. In mid-1946, he was chosen to serve as a civilian observer in the Electronics Group of “Operation Crossroads,” the two atomic bomb tests at the Bikini Atoll. Throughout the course of the operation, he observed the effects of the bombs on the equipment onboard ships subjected to the test, as well as in the observation fleet. Following his “Operation Crossroads” assignment, Walworth continued working for Raytheon to develop and refine electronics and radar equipment. In 1952, the Walworths moved to Concord, Massachusetts, where they lived in the Conantum neighborhood. Wilber Y. Walworth passed away on April 20, 2001.

SCOPE AND CONTENT: A collection of papers relating to Wilber Y. Walworth's employment and associated work from the years 1941 to 1949. It includes papers detailing his employment history with the Ritter Dental Manufacturing Company of Rochester, New York, association, work with the Submarine Signal Company of Boston, Massachusetts (later Raytheon Company), involvement in the 1946 Joint Task Force One "Operation Crossroads" in the Electronics Group, and various other organizations he was associated with throughout his early life. The collection is organized into four series: Series I contains materials concerning the Ritter Dental Manufacturing Company in Rochester, New York from 1941 to 1942. It is broken down into two subseries, and the material within the subseries is kept in the order in which it was received to preserve context. Subseries I.A contains designs and plans for various dental equipment, company memorandum, and personal notes clearly related to the Ritter Dental Manufacturing Company. Subseries I.B contains materials that are assumed to be related to Walworth’s work at Ritter Dental, but some may, in fact, be related to another involvement. It includes photographs of Walworth, training program reports, various personal notes and blueprints, and instructional charts and information. Series II contains materials related to Walworth's employment at the Submarine Signal Company in Boston, Massachusetts, from 1943 to 1948. It is broken down into three subseries by subject, and the material within the subseries is organized chronologically. Subseries II.A consists of Walworth's personal correspondence with the company during his employment. Subseries II.B contains correspondence and paperwork related to Walworth's work as a Radar Field Engineer for the U.S. Navy during World War II. Subseries II.C contains Submarine Signal Company newsletters, including issues of the Submarine Signal Amateur Radio Club Newsletter "Soundings" and a pamphlet, The Fathometer Goes Trawling. Series III contains materials related to Walworth's involvement with the Electronics Group of "Operation Crossroads" from 1946 to 1947. The series is broken down into four subseries by subject, and the material within the subseries is organized chronologically. Subseries III.A contains Walworth's personal paperwork throughout the operation, including correspondence, personal notes on the tests, and medical paperwork. Subseries III.B contains administrative memos and instructions, primarily from the Electronics Coordinating Office of the operation. Subseries III.C consists of U.S. Navy ship newsletters and the U.S.S. Avery Island's Crossroads Crosstalk Newsletter throughout the course of the operation. Subseries III.D contains photographs of "Operation Crossroads" Able and Baker tests, as well as a newspaper articles discussing both the tests and the formation of the U.S. Atomic Energy Commission. Series III.E contains unused letterhead and envelopes from the U.S.S. Avery Island for "Operation Crossroads." Series IV contains informational packets, newsletters, and personal correspondence related to organizations that Walworth was associated with after 1946. It is organized into two subseries: Subseries IV.A contains the Institute of Radio Engineers informational packets and membership papers, and Subseries IV.B contains the issues of the Journal of the Engineering Societies of New England.

NOTES AND COMMENTS: Removed from a collection of Kalmia Woods Corporation records donated by Vivian Walworth.

Series I. Ritter Dental Manufacturing Company Notes and Papers (1941-1942, plus much undated)