Richard K. Walton Collection of Papers Relating to the Writing and Publishing of the Book Birds of the Sudbury River Valley -- An Historical Perspective, 1982-1990 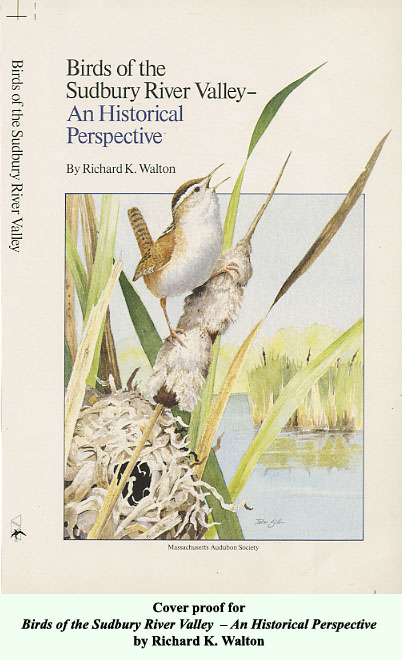 BIOGRAPHY: Naturalist, writer, researcher, teacher. Richard K. Walton was born in 1941. He received a Bachelor of Arts in philosophy from Hobart College in June, 1964, and a Master of Education in natural science education from Lesley College in June, 1978. He taught in the Concord Public Schools from 1970-1986, was Atlas Coordinator and Researcher at the Massachusetts Audubon Society from 1984-1995, and was co-owner, producer, and director of Brownbag Productions from 1995-2009. Since 1991 he has been director and researcher for the Monarch Monitoring Project and self employs as a writer, researcher, and consultant. He lives in Concord, Massachusetts. Birds of the Sudbury River Valley -- An Historical Perspective was his first book.

SCOPE AND CONTENT: This collection was originally presented to the Concord Free Public Library as a scrap book. Series I contains pages that Walton selected from various drafts of the manuscript for Birds of the Sudbury River Valley -- An Historical Perspective (BSRV); copyedited pages; feedback the author received from other experts in the field including Allan Morgan, Richard A. Forster, John Hines, Jr., and Wayne Petersen; selected pages from the boards and the blues; cover proofs; and research materials including copies of journals written by Henry David Thoreau, William Brewster, William Griscom, Ruth Emery, Allen Morgan, and Wayne Petersen. Series II contains correspondence, mainly congratulating Walton on the publication of BSRV. Series III contains newspaper clippings about BSRV, Walton’s activities as a birder, and Allen Morgan’s obituary; materials advertising BSRV; posters from a party honoring Walton on the publication of BSRV and a talk he gave at the Goodnow Library in Sudbury; reviews of BSRV in The Auk and Journal of Field Ornithology; and a pen he used to mark up the galley proofs. One artifact box and one oversized folder accompany series III. Series IV contains a copy of BSRV given to the Concord Public Library and autographed by Walton.

NOTES/COMMENTS: Accessioned August 28, 2013; AMC# 214.
Materials were dismounted from the scrapbook and rearranged. Manuscript materials were originally divided into the three parts of the book, “Part I -- The Land and the Naturalist,” “Part II -- The Journals,” and “Part III -- The Checklist” and chronologically within those categories. They have been rearranged to keep papers from each stage of the manuscript’s production together. Letters and notes that were attached to manuscript materials remain with the manuscript materials and unattached correspondence has been moved to the correspondence file. There was a section of the scrapbook that consisted of correspondence and was arranged chronologically. This section has been preserved in original order including one letter from Allen Morgan which appears to be misdated as January 7, 1984. Because the letter references the published book and the book did not come out until late 1984, we believe the year on the letter should be 1985. Newspaper clippings and select notes from the scrapbook have been photocopied and the acidic paper removed.