Collection of materials relating to ships named the USS Concord, 1898-1992 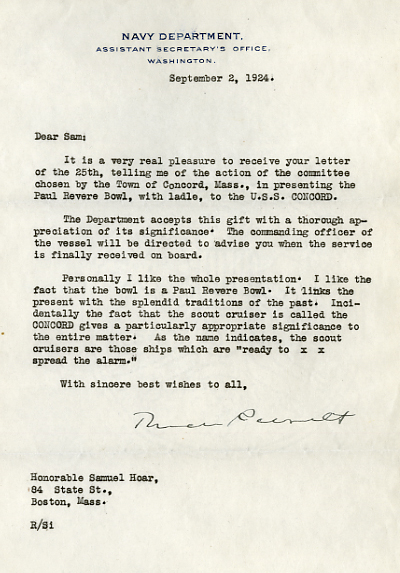 HISTORY: The first USS Concord was a sloop-of-war launched on September 24, 1828 and commissioned on May 7, 1830. She was used in various locations until she ran aground October 2, 1842 off the coast of Mozambique. The second USS Concord was a PG-3 twin screw gunboat launched March 8, 1890, and commissioned February 14, 1891. She served during the Spanish-American War under Admiral Dewey and played a part in the victory at Manila Bay. She was decommissioned and then recommissioned twice before she was permanently decommissioned on November 4, 1909. The third USS Concord was a No. 773 built in 1898, purchased by the Navy on September 22, 1917, and commissioned November 20, 1917. She was renamed the Mendota in 1920 and, in 1932, the Muscotah. The fourth USS Concord, CL-10, was launched December 15, 1921 and commissioned November 3, 1923 with Captain O.G. Murfin in command. During WWII she served in the Pacific in the Kurile Islands and Japan under the command of Rear Admiral Ingram Cecil Sowell. She was decommissioned on December 12, 1945 and sold January 21, 1947. The fifth USS Concord, AFS-5, was a “MARS” class combat stores ship launched December 17, 1966 and decommissioned on October 15, 1992.
Starting with the second USS Concord, there has been a reduced-size Minute Man statue on display on all of the USS Concord ships. This statue derives from the original full-size statue created by sculptor Daniel Chester French for the 1875 commemoration of the centennial of the Concord Fight in 1775. Eight reduced-sized replicas have been made as of 1986. The original reduced-size statue is now held by the Navy Memorial Museum, and new USS Concord vessels are presented with a reduced-size replica for placement. In 1947, the original replica was placed on loan to the Town of Concord until 1968 when it was placed on the fifth USS Concord. The Navy Memorial Museum more recently lent the original to the Concord Free Public Library and the Concord Museum (in succession).

SCOPE AND CONTENT: An artificial collection of materials pertaining to the five USS Concord vessels, dealing primarily with the second, fourth, and fifth vessels. Materials include photos of and artifacts from the vessels themselves, as well as correspondence and information pertaining to the various vessels. There is information on the life of Rear Admiral Ingram Cecil Sowell and also on Manila Bay and the USS Concord’s participation in WWII. The collection also contains correspondence and accounts relating to the reduced-sized Minute Man statue as well as other items on the USS Concord vessels. Correspondence ranges from the 1920s to the 1980s, and includes a letter from Theodore Roosevelt while he was Assistant Secretary of the Navy. There are transcripts from the annual Concord town reports about the gifting and then holding of these statues as well as other gifts given by the town. Most correspondence within the collection are either to or from various members of the “Town of Concord Council.”

NOTES AND COMMENTS: Items in the collection dated and arranged chronologically unless no date is given on the record.

RELATED MATERIALS: The John Shepard Keyes Papers at the CFPL include records of the gunboat Concord.

Facts and history of the USS Concord vessels 1-4, released for Navy Day, October 7, 1927

Detailed history of the USS Concord vessels, mostly about the fifth USS Concord, AFS-5, and the Mission Statement

History of the USS Concord, CL-10

Two sheets from Concord town report dealing with the USS Concord, one dated 1968

Typed copy, “In a critical article of the Spanish War so able Strategist as Admiral Luce said”

“To Surprise Camara,” in the event that Camara should arrive before the Monterey

Pamphlet, “The Bounding Billow,” about the fall of Manila, Aug-Sept. 1898

Newspaper articles, “Few of Dewey’s Officers remain” and “Destroy the Olympia,” May 10, 1938

ALS, George Lerch to “Board of Aldermen Town of Concord,” with facts on USS Concord and officers, December 27, 1948

Black and white photo of hatch doors, accompanied by copy of TLS, Ira Miller to Florence Brooks, May 10, 1963

Envelope from letter from Theodore Roosevelt to the Board of Selectmen, Concord, Mass., [1924]

Copy of photos of the Minute Man

Memorandum, transfer of Concord Minute Man statue to the US Navy, November 4, 1968

Photograph, black & white, description on back

Photograph, black & white, description on back 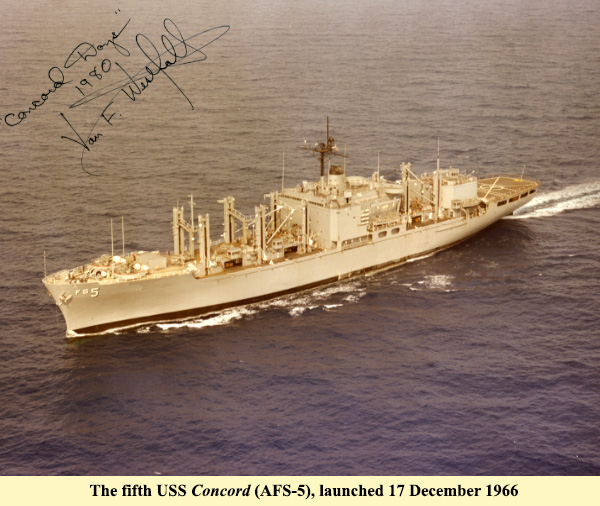