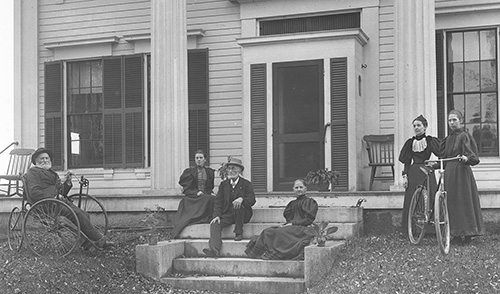 Concord's Home for the Aged

History: A small, privately funded and managed non-profit senior residence in Concord, Massachusetts, for men and women in good health (room and board are provided, but not nursing or medical services).

Concord’s Home for the Aged was incorporated in January 1887 as a residence for “aged, worthy indigent men and women resident in Concord”—qualifications specified by Martha R. Hunt, through whose 1886 gift of $20,000 the Home was established.  (With this gift, the concept for the residence evolved from an earlier initiative of the Concord Female Charitable Society to set up a home for elderly local women.)  A house was purchased with Miss Hunt’s donation (the present 110 Walden Street; the Timothy Wheeler/Cyrus Stowe House) and the remainder of the funding was invested.  Concord’s Home for the Aged opened in July 1887.

The signers on November 30, 1886 of the original agreement of association for Concord’s Home for the Aged included: Mary A. Brooks; Elizabeth A. Ball; Elizabeth B. Bartlett; Lucy A. Buttrick; Caroline F. Cheney; Sarah H. Clark; Anne E. Damon; Elizabeth M. Duncan; Abby M. Gourgas; Julia Hosmer; Bessie K. Hudson; Mary C. Reed; Rebecca W. Todd; Ellen S. Wood; Samuel Hoar; Edward C. Damon; Richard F. Barrett; William H. Hunt; and Henry J. Hosmer.  The officers of the new association consisted of a president, two vice presidents, a secretary, a treasurer, and a board of seven directors.  A separate Board of Managers was established “to have general superintendence of the internal arrangement and management of the Home; the regulation by standing rules of its domestic concerns; the selection and appointment of the Matron, and the oversight of the comfort of the inmates.”

For a good part of the Home’s history, residents were provided full care for life, including payment for medical, nursing, hospital, and nursing home care.  The financial arrangements have always required the payment of an entrance fee.  With time, they came to include the formal transfer of personal assets to the Home.  Since the 1980s, residence has entailed the payment of a monthly fee for room and board and taking personal responsibility for medical and nursing expenses.

In 1981, Concord’s Home for the Aged changed its name to The Lindens and in 1987 to Timothy Wheeler House.

Scope and content: An organic but incomplete set of the records (1886-2014) of Concord’s Home for the Aged/Timothy Wheeler House, in Concord, Massachusetts.  Administrative records (1886-2014) include minutes of and other materials relating to annual meetings of the Board of Directors, printed by-laws and material regarding by-law changes, items relating to the 110 Walden Street property (1987, 1997, 2004) and to Concord’s Home for the Aged burial lots in Sleepy Hollow Cemetery (1912-1995, in summary form), correspondence to the Board of Directors and the Board of Managers (1888-1908, 1978, 2004), a printed publicity brochure and typed information compiled for distribution, and a partial file of printed annual reports.  Financial records (1824-1972) consist of cash journals (1924-1969), securities records (1938-1970), and a February 1972 audit for fiscal year 1971.  Two record volumes relate to residents’ quality of life: Visiting Committee records (1887-1905) and Board of Manager records (1951-1956; kept in a volume that also holds visitor records, 1906-1909).  Resident records include a record book containing signed legal residency agreements (1888-1921), a record book of information on life care residents (1888-1996), information sheets and supplemental materials on monthly boarders (1983-2006), and applications for and expressions of interest in residence at Timothy Wheeler House (2000-2010).  Employee records consist of letters to nine employees regarding rates of pay, with supplemental material (1990, 1994-1998) and a blank, undated personnel evaluation form.  Material about the history and archives of Concord’s Home for the Aged/Timothy Wheeler House consists of typed historical write-ups (1981-1987; accompanied by photocopy from several much earlier historical resources) and typescript remarks by John W. Clarkson on the records of Concord’s Home for the Aged (1973).

Source of acquisition: Presented by the Board of Directors, Timothy Wheeler House, February 5, 2019.

Notes and comments: At donor request, any Social Security numbers remaining in the records have been redacted.  Collection accessioned February 5, 2019 (AMC 272).

Box 1, Folder 4: Building, property, and other holdings, 1912-1995, 1987, 1997 and 2004.  Includes: material (1912-1995, summarized) relating to Concord’s Home for the Aged burial lots in Sleepy Hollow Cemetery; a June 4, 1987 list of applications to Concord’s Historic Districts Commission for certificates of appropriateness including proposals for a marker and for repair or removal of a fence by Concord’s Home for the Aged; a sheet recording information (1997; updated 2004) about surveying of the Walden Street property.

Box 3, Folder 2: Applications for and expressions of interest in admission, and related materials, 2000-2010 (including some undated items).

Box 3, Folder 14: History of Concord’s Home for the Aged/Timothy Wheeler House, 1981-1987 (and undated; including photocopy from earlier historical sources).

Box 3, Folder 15: Typescript, John W. Clarkson remarks on the records of Concord’s Home for the Aged, addressed to the October 3, 1973 Board of Managers meeting.