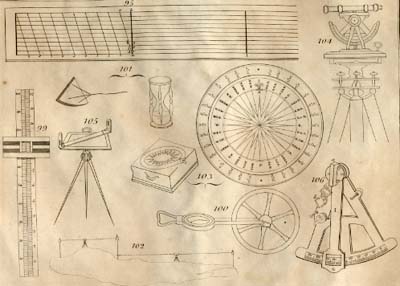 Illustration from plates for Cambridge Mathematics

EXTENT: Fifty-eight items (in one archival box and one oversize folder, with one item shelved separately).

SCOPE AND CONTENT: Fifty-eight items once belonging to several members of the Thoreau family. Dated items range between 1828 and 1858; a significant proportion are undated. The collection includes: Cynthia Thoreau's copy of an antislavery newspaper ( National Anti-Slavery Standard , September 30, 1854, containing an article on the Anthony Burns case); an antique trunk bearing Helen Thoreau's initials; fifteen items that may have once belonged to Henry Thoreau (a book of engraved plates to accompany volumes of the Cambridge Mathematics ; a printed plan—dated 1828—for the Boston and Providence Railway; two copies of a prospectus and four printed maps issued by the Society for the Diffusion of Useful Knowledge; a printed booklist dated July, 1858; Gale's 1832 printed map of Haverhill; an 1850 printed broadside (To carpenters), issued by David Loring to solicit "sealed proposals" to build a barn in Northboro (relating to nos. 80a-80g in the Concord Free Public Library's Thoreau survey collection); Walling's 1852 printed map of Concord; and four rolled sheets of blank paper of the type used by Thoreau in drafting surveys); and Sophia Thoreau's printed and manuscript sheet music and related items—blank staffed sheets for copying music by hand and Graupner's piano instruction book—dating between 1833 and 1841.

SOURCE OF ACQUISITION: Likely a gift or bequest of Sophia Thoreau during the 1870s.

ASSOCIATED MATERIALS: The Concord Free Public Library also holds a major collection of Henry David Thoreau papers (including some 200 of Thoreau's manuscript surveys and a volume of his surveying field notes), a collection of Thoreau family correspondence, Helen Thoreau's antislavery scrapbook, and a number of other collections offering materials generated by or relating to various members of the Thoreau family. Consult other finding aids on the CFPL website or contact the library's Special Collections for additional information.

Trunk (covered with animal hide and studded with tacks forming the initials “H.L.T.”). Used by library to store Thoreau family collection prior to processing.

Folder 1 :
Book of engraved plates (untitled; undated) apparently published to accompany volumes of the Cambridge Mathematics (a series of mathematical texts translated by Harvard professor John Farrar, first published beginning in 1818, later reprinted, and familiar to H.D.T. while a student at Harvard). Includes plates showing applications to surveying. Inscribed in ink on front of wrapper: “William A. Henry [?] / Cambridge .”

Note: H.D.T. surveyed a woodlot belonging to Reuben Brown in October 1851 (see CFPL Thoreau survey #14a). He also attended the estate auction for the deceased Brown's property, recording his observations on what he found there in his journal entry for January 27, 1854 .

Folder 3 :
Prospectus and maps issued by the Society for the Diffusion of Useful Knowledge:

A Series of Maps , Modern and Ancient, Published Under the Superintendence of the Society for the Diffusion of Useful Knowledge ( prospectus , 1832 [?]; two copies ).

Asia Minor . Published under the Superintendence of the Society for the Diffusion of Useful Knowledge (London: Baldwin & Cradock, 1830).

The Eastern Part of the Ancient Persian Empire , by G. Long, M.A., 1831. Published under the Superintendence of the Society for the Diffusion of Useful Knowledge ([ London ]: Baldwin & Cradock, 1831).

Persia , with Part of the Ottoman Empire , by G. Long, M.A., 1831. Published under the Superindentence of the Society for the Diffusion of Useful Knowledge (London: Baldwin & Cradock, 1832).

Turkey , Containing the Provinces in Asia Minor . Published under the Superintendence of the Society for the Diffusion of Useful Knowledge (London: Baldwin & Cradock, 1830).

Note: In calling for a higher, more intuitive, less lettered kind of knowledge in his essay “Walking,” H.D.T. referred ironically to the Society for the Diffusion of Useful Knowledge.

Loring, David. To carpenters. Sealed proposals will be received by the subscriber until the 15th of January, 1851, to build a barn in Northboro', sixty feet long by thirty-eight wide, with sixteen and a half feet posts, and twenty-four feet rafters ... Concord, December 16, 1850. David Loring. Note: This broadside relates to nos. 80a-80g in the CFPL's Thoreau Survey Collection. Pencil inscription on blank verso: "J.T. / C.T. / S.T. / Mrs. B. / Maria--."

Unfoldered in box:
Four sheets (rolled) of blank paper , of the type used by Thoreau in his draft surveys.

As the Robin When Once Fondly Cherished . A Ballad. The Words by G.E. Inman, Composed by Henry R. Bishop ( Boston : Parker & Ditson, [undated]).

Bring Roses . A Favorite Song Written by Mrs. L.P. Smith, Late of this City. Music Composed & Respectfully Inscribed to his Friend and Pupil Miss Caroline Sanford by O. Shaw (Providence: Published by the Author, 1834). Inscribed in pencil on page [1]: “S.E.T.”

The Captive's Lament . Words by a Member of the Mass. F.E. Society. Music by H.W. Day of Boston . Printed on page [4] of an issue—December 1, 1840—of the Ladies' Emancipation Gazette . Item consists only of sheet bearing pages 3-4 of the issue.

Christmas Carol . Written by William R. Spencer Esq. Set to Music By A Gentleman of Boston ([without place of publication]: S. Wetherbee , [undated]).

Fleuve du Tage , or Come Rest in This Bosom. Arranged with Variations for the Piano Forte by G. Kiallmark ( Boston : C. Bradlee, [undated]). Inscribed in pencil on page [1]: “Sophia.”

Folder 6 :
Hours There Were , A Favorite Duett, as Sung by Miss M.H. Woodward and Mr. Solomon, At the New York Concerts, Arranged by Mr. J. Long (New York: Atwill's, [undated]).

Was It Not at One ? (Boston: Wm. H. Oakes, 1841). Printed front cover bears collective title: Tyrolese Melodies, as Sung by the Rainer Family. Arranged with Symphonies and Accompaniments by Friedrich F. Müller … Inscribed in pencil on front cover: “S.E. Thoreau.”

The Indian Song. Piece copied on page [1] of single sheet. Copied on reverse (page [2]; upside down in relation to The Indian Song ): In the days when we went gipseying .

The Switzers Song of Home. By J. Moschelles. At bottom of page [2]: Haymaker's Dance.

Back to the Selected Finding Aids page