The first Concord Players production was Fame and the Poet, which premiered on November 28, 1919. Local performances were staged at Monument Hall or the Town Hall until the fall of 1922. The Concord Players assisted the town with payment towards construction of a stage in the recently repaired Town Armory, which was renamed the Veterans Building in 1920. Their first performance on this new stage was November 16, 1922. Today that building is known as 51 Walden Street and is home not only to the Concord Players but also to the Concord Band, the Concord Orchestra, and various dance classes.

In addition to their own productions, the Concord Players have aided other theater groups, including those related to Concord Academy and to local parishes. Members have assisted with everything from directing to scenic effects to make-up instruction and application.

The Concord Players are three-time winners of the New England Theater Conference (NETC) Moss Award and 5-time winners of the Eastern Massachusetts Associations of Community Theaters Festivals. They are especially well known for their presentation of Louisa May Alcott’s Little Women every ten years, starting in 1932.

There are also mounted and unmounted playbills, clippings and photographs documenting local productions that members of the Concord Players assisted with but which the Players did not directly produce between 1923 and 1970 (bulk 1923-1945). Among these records is an official ballot from the Concord Massachusetts Women’s Club (dated April 11, 1927).

5 oversized folders
A partial run of playbills from productions by the Concord Players, 1926-1974. These playbills are extra-long and consequently  stored separately from the rest of the collection.

Box 1, Folder 4
A script from the Concord Players’ 1983 production of Snow White and the Severn Dwarfs: A Musical Fairy Tale, by John McKey II.

Box 1, Folder 5
Playbills, clippings and photographs, 1923-1970 (bulk 1923-1945), from performances presented by theater groups other than the Concord Players.Folder includes an official ballot from the Concord Massachusetts Women’s Club dated 1927. 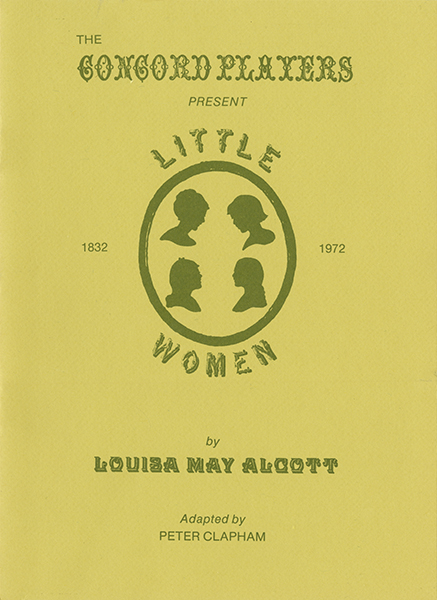