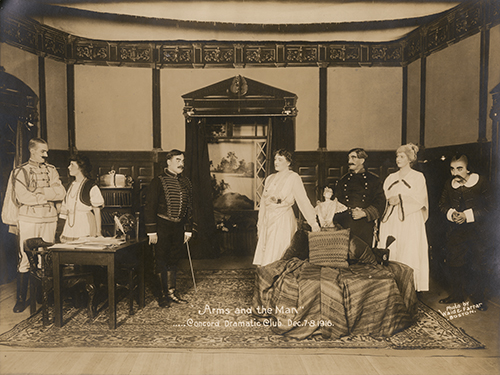 History: The Concord Dramatic Club of Concord, Massachusetts, was an amateur theater group which operated between 1875 and 1918. The group can trace its origins back to the Concord Drama Union which was established in 1856 with the assistance of Louisa May Alcott.

The Club existed in two phases, the first between 1875 and 1900 and the second between 1901 and 1918. The first phase had no formal organization or membership. Their first production took place on Friday, March 12, 1875. The second phase of the Concord Dramatic Club was much more structured. It featured officers, by-laws and dues-paying members. Their first production debuted on February 16, 1901, and their last on December 18, 1917. Over the course of their seventeen-year run they put on 41 productions and a total of 62 performances.

Scope and content: Records include: three record books detailing both annual club meetings and meetings of the executive committee between 1900 and 1918 (at the back of the third  the updated club rules as amended in June 1916); a draft of the rules for government of the club, [undated]; amendments and suggested changes to the rules, [undated]; a book containing the rules of the club, [undated]; a form for trusteeship, [undated];  and annual reports of the presidents, secretaries, and treasurers, 1901-1914 and [undated]. The collection includes correspondence from club members accepting or declining appointments to various club committees, post cards, thank you notes, invitations and requests to borrow props and scenery, 1900-1918 [bulk 1901-1903] and [undated]; documents pertaining to pre-production preparation include building inspections, manuscript loans and scenery/set design, 1901-1909; materials pertaining to performance admission including guest tickets, door checks and admission guidelines, 1892-1915; a list of productions between 1900-1917, programs and playbills, 1875-1917; scripts, 1903 and [undated]; and cast photographs, 1916 and [undated].

Source of acquisition: Gift of Marian B. Miller

Provenance: Hans and Marian B. Miller were members of the Concord Players. Hans Miller was the archivist of the players and his wife was given the records of the Concord Dramatic Club in 1954.