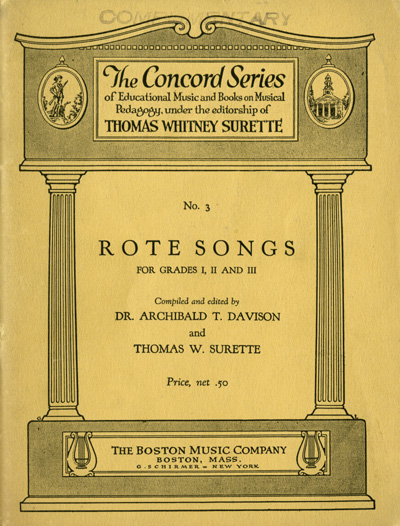 BIOGRAPHY:
Thomas Whitney Surette was born to Frances Jane Surette and Louis Athanase Surette in Concord, Massachusetts, in 1861.  He grew up in a very musical family and began playing music at a young age.  He taught piano and served as the organist for the Unitarian Church in Concord, and took courses at Harvard.  In 1899, Surette married Ada Elizabeth Miles of Philadelphia, Pennsylvania.

As a music teacher and lecturer, Surette valued taste and depth in composition.  He gained attention through his composition, with Henry D. Coolidge, of the comic opera Priscilla: or, The Pilgrims Proxy, in 1889.  While teaching at the Hill School in Pottstown, Pennsylvania, he continued to write music.  He later became a staff lecturer for the Oxford extension courses at the University of London.

When he returned from England, Surette wrote several newspaper articles about the teaching of music.  The public reaction to some of these may have inspired the creation of the Concord Summer School of Music (CSSM) in 1915.  In 1917 he published Music and Life: A Study of the Relations between Ourselves and Music--a book some have referred to as radical in its critique.  When not teaching the four-week summer course, Surette traveled around the United States and to Europe, giving lectures on various composers and the teaching of music.

In 1937, his wife—the charismatic face of the school—died.  Surette kept the school open for two more years with the particular help of G. Wallace Woodworth.  He then taught at Black Mountain College in 1938.  In 1939, he suffered a stroke, which left him mostly paralyzed. He lived the rest of his days in a nursing home in West Concord where he died in 1941.

HISTORY:
Starting small in the home of Thomas Whitney Surette in 1915, the Concord Summer School of Music grew over time, eventually moving to the Parish Hall of Concord’s First Parish Church.  In the 1930s, the school moved to the Concord Academy gymnasium on Main Street. It remained open until 1937.

The mission of the Concord Summer School of Music was to improve the teaching of music.  Already musicians and music teachers, students attended the school primarily to gain a better understanding of their profession and only secondarily to improve their musicality.  Surette passed along his strong belief in teaching an appreciation of beauty in order to teach taste.  He emphasized the importance of teaching students to appreciate good music and poetry over technical ability and virtuosity.  With this aim in mind, the school included much carefully selected choral singing and poetry.

As the school grew, Surette decided to expand the faculty as well as the facility. He hired teachers who understood his goals from as far away as England.  His students began requesting books to use in their own elementary music classes.  Two professors who shared his vision for the teaching of music helped him fulfil these requests.  Dr. (“Doc”) Archibald T. Davidson and Augustus Zanzig worked together with Surette to compile music books in the Concord Series.  They designed these books to fit the Concord Summer School of Music model for teaching young students music and musical appreciation.

After the school moved to the Unitarian Church, parties (called “frolics”) became a regular feature.  These frolics always included skits written by the students and often impersonations (particularly of Surette).  There are several frolic photographs in this collection, as well as “dalliances” (funny little songs) written by students to share with Surette.

A Harvard graduate, and a teacher and pianist in New York, Wesley Weyman, was a pupil of Tobias Matthay in London, Leschetsky in Vienna, and Godowsky in New York. He came to the Concord Summer School for three or four summers in the late 1920s and gave lectures each week on the history of dance.  He played dance music written by English, French, and Italian composers, and told stories about different kings and queens who were interested in dancing and inventing new steps to different melodies.

Augustus T. Zanzig was a teacher at the Concord Summer School of Music and a co-compiler with Thomas Whitney Surette and Archibald T. Davison on several music books.  He gave a copy of his syllabus to Mary Walker Delafield for her to use in teaching.

Katherine K. Davis, composer of songs, piano and organ music, cantatas, children’s operettas, choruses, operas, and “Carol of the Drum,” was a student at the Concord Summer School of Music.  She donated papers including documents from her experiences at the school and with Surette to the William Munroe Special Collections of the Concord Free Public Library.

SCOPE AND CONTENT: An artificial collection, pieced together from various donations, mostly from former students.  The collection pertains to both Thomas Whitney Surette and the Concord Summer School of Music and contains papers and records generated between 1846 and 1981 (the bulk of the material between 1889 and 1938).  The collection includes: personal and professional correspondence; typescripts and news articles about Thomas Whitney Surette and the Concord Summer School of Music; student enrollment lists and cards; diaries by Mary Walker Delafield from her time as a student at the school; scrapbooks compiled by the Surettes; musical scores, primarily for the piano forte, some composed by T. W. Surette; photographs (primarily of students, visitors to the school, and friends of the Surettes); and programs for musical performances and lectures.  The scrapbooks span the years 1899-1937.

PUBLICATION BASED ON USE OF COLLECTION: Adams, Kathleen U. Thomas Whitney Surette: A Crusader for Good Music. Cambridge: Windflower Press, 1983. Print.

Series I.  Materials in various formats relating to Thomas Whitney Surette and the Concord Summer School of Music, 1915-1975:

Box 1, Folder 1:
Cassette tape recording of Mary Walker Delafield (by John Norwood) regarding the Concord Summer School of Music between the years of 1927 and 1929, completed February 1975.

Box 1, Folder 2:
Letters written by Thomas Whitney Surette to Mary Walker (later Delafield).  Many letters display Surette’s commitment to his students and friends.  A typed inventory of letters is included in the front of the folder. The letters date from April 1927 through August 1935.

Box 1, Folder 3:
Letters from Mary Walker Delafield to the archivist Joan Harris of the Concord Free Public Library during the donation process (March 1974 through December 1974 and October 1975).  These letters regard Concord Summer School of Music, Thomas Whitney Surette, and many students and participants at the school (including a short biography of fellow student Ramsay Duff).

Box 1, Folder 4:
Excerpts from the diary of Mary Walker (Delafield) written in 1927 and 1928 while a pupil at the Concord Summer School of Music.  She typed these excerpts specifically for the library.

Box 1, Folder 6:
List of compositions performed and lectures given at the Concord Summer School of Music, 1915-1934.  Accompanied by a letter apparently sent to all previous pupils by Thomas and Ada Surette.

Box 1, Folder 7:
Syllabus for Conferences on the Teaching of Music, by Augustus T. Zanzig (used by Mary Walker Delafield in teaching; given to her by Zanzig, who originally used it for teaching at the Concord Summer School of Music).

Box 2, Folder 1:
Includes a letter containing genealogical information and a photograph of the Surette homestead; a seven-page manuscript titled “He Taught Taste before Technique” (Frances M. Pray, 1977—student in 1923, 1927, 1929),  accompanied by a draft letter (Florence M. Pray, student 1915-1920, 1927), and letter from Frances M. Pray to Joan Harris written at time of accession; two articles about Surette and the Concord Summer School of Music written by Edward Yeomans; an article about the school’s last season; several articles about performances by Ralph Kirkpatrick; and a copy of T. W. Surette’s obituary. 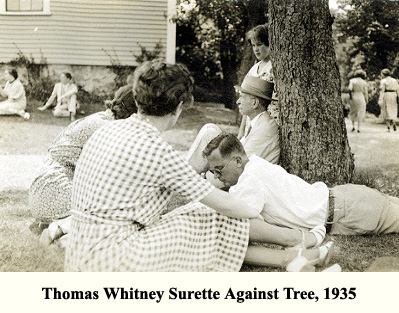 Box 3:
A partial membership record, containing student information on cards donated by the estate of G. Wallace Woodworth.  Some cards contain information limited to student’s names and addresses, others contain detailed descriptions, including notes about education, personality, and musical ability.

Box 4, Folder 3:
Photographs of the Concord Summer School of Music from 1935.  These include photographs of: G. Wallace (“Woodie”) Woodworth, T. W. Surette, Ada Miles Surette, Ted Lautner, Bruce Simonds, Malcolm Holmes, Mariana Lowell, Ellen Emerson, Bob Delaney, Mary Walker Delafield, and many other unidentified students and visitors.  There are many group photographs in this folder including photos of a frolic and one of folk dancing.

Box 4, Folder 5:
Several leaves from a book mailed to Katherine Davis by T. W. Surette and a 1921 letter written by Surette to all students.

Box 5, Scrapbook A, 1915-1938
The cover of this scrapbook is black and white; the spine label reads “Concord Summer School of Music.”  This scrapbook focuses primarily on the school and includes many photos (listed in detail below), school programs, student lists, letters, and programs from various performances.  Some items were removed from this scrapbook due to preservation concerns and can be found in Box 5, Folders 1-4.  Not all photos contained in this scrapbook are labeled.

Box 5, Scrapbook C, 1897-1911:
Cover of this scrapbook is patterned in dark red, blue, and off-white and inscribed “Newspaper Notices of Lectures etc.”  Index in front probably added in archive.  This scrapbook contains newspaper articles by Surette and some on subjects of interest to him.  It also includes many programs for and reviews of his lectures and performances of his compositions.  Several of the articles concern church music.

Box 5, Scrapbook D, 1889-1894:
The dark red scrapbook documents the success of Priscilla: or, The Pilgrim’s Proxy: a comic opera in 2 acts, lyrics written by Henry D. Coolidge; music composed by Thomas W. Surette.  Contains one cabinet card depicting a group of characters from the comic opera.  Scrapbook includes: announcements, newspaper clippings, and programs for the opera as it is performed in different cities.

Box 5, Folder 1:
Contains 18 items removed from a scrapbook (probably A).  Mostly letters, primarily sent to Surette by students in gratitude for their time at the Concord Summer School of Music.  One letter is in French.

Box 5, Folder 2:
Items removed from a scrapbook (probably A) Includes a photographic negative from a page of music made for Kathleen Adams in 1980.  Teaching notes regarding music appreciation and the teaching of music.  Several letters regarding Thomas Whitney Surette’s visit to London.

Box 5, Folder 3:
Includes items removed from a scrapbook (probably A).  Letters of introduction written by prominent figures and institutions for Surette before his trip to Europe.  One “dalliance” written by a pupil and three letters from “Dante” in Northampton, Massachusetts, written ca. 1936.

Box 5, Folder 4:
Includes items removed from a scrapbook (probably A).  The letters and newspaper clippings were cleaned, mended, and preserved in January 1978.  The letters include one from Gustav Holst to T. W. Surette regarding glees and one from Ralph Vaughan Williams to Surette regarding a student.  This folder also contains mounted newspaper clippings and a few programs.

Box 5, Folder 5:
Includes photographs of characters from Priscilla: or, The Pilgrim’s Proxy, on cabinet cards and large cabinet cards
Creators of the cabinet cards include:
Ye Longfellow Gallery in Portland, Maine
Moreno A Lopez in New York
Hardy in Boston, Massachusetts
St. Johns in Hartford, Connecticut 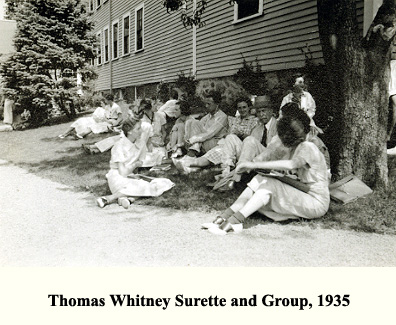