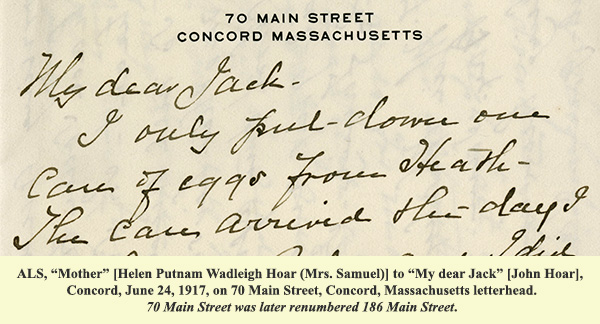 ORGANIZATION AND ARRANGEMENT: Organized in a single file; arranged chronologically.

The Hoars of Concord and Lincoln, Massachusetts descended from Charles Hoare of Gloucester, England (died 1638) and Joanna Hincksman Hoare.

SCOPE AND CONTENT: Six miscellaneous Concord-connected items (an engraved invitation, four letters, and one appointment by the Concord Board of Selectmen), [1894]-1917, generated or accumulated by members of the Hoar family.  See container list (below) for itemization.

RELATED MATERIALS:  The William Munroe Special Collections of the Concord Free Public Library holds multiple other collections and items connected with the Hoar family.  Consult the list of finding aids at https://concordlibrary.org/special-collections/fin_aids and the data base of the Minuteman Library Network for more information.

Engraved invitation to three dances given by the Concord Independent Battery (January 21, February 21, and April 18, [1894]).  Included in the list of names under the heading “Matrons” on the invitation is that of Mrs. Sherman Hoar.