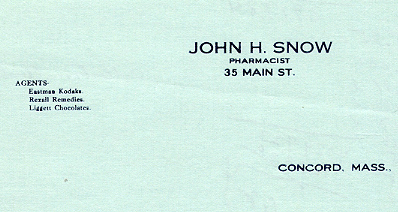 HISTORY: Snow Pharmacy was located on the Friend’s Block in Concord Center (Concord, Mass), at the intersection of Main Street and Walden Street (now 49–57 Main Street). The block was built in 1892 by pharmacist John C. Friend, who relocated his Concord pharmacy to the first floor of the new building. In 1913, John C. Friend sold the pharmacy to Concord pharmacist John H. Snow. The pharmacy was maintained by Snow’s successors until the 1990s. Walter Foley (1931–2010) was the last pharmacist of Snow Pharmacy.

SOURCES OF ACQUISITION: Gift of Walter Foley 1998 and (through his family) 2011.

*RESTRICTIONS ON ACCESS AND USE: The Snow Pharmacy Records are stored in an off-site vault.  To use the collection, researchers must provide at least twenty-four hours advance notice and specific citations to box(es) and folder(s) desired.  Contact the William Munroe Special Collections (978 318-3342) for additional information or to arrange to use the collection.

Except for aggregate studies, the use of the records is closed for seventy-five years from the date of creation.

Volume I: November 1, 1915–August 26, 1919
Spine reads: Ledger
The beginning of the volume is arranged like an address book, with tabs A–Z. On these pages are customer’s names, organized by last name, with the corresponding page number on which more detailed information about their account can be found. The rest of the volume includes detailed transactions for each person’s account, including the date of the transaction, items purchased, the price, and account totals.

Volume II: March 1, 1917–December 31, 1922 (no transactions listed between September 1, 1917–November 1, 1917)
Ledger containing daily transactions at the pharmacy including the items purchased, their cost, and the weekly expense and income totals. Customer’s purchases and account information is sometimes noted.

Volume IV: March 2, 1889–October 15, 1891
Like Volume III, this volume contains the original prescriptions that have been pasted into the book. Most of these prescriptions are written on lined paper without any indication of who the doctor is. The prescriptions are numbered and dated, starting with 15301 and ending with 23200.

Volume VI: October 10, 1909–November 6, 1915
Spine reads: Copy Prescription Book
Records of the prescriptions processed each day. Each prescription has been handcopied into the prescription book, numbered, and initialed. The prescriptions contain information about ingredients, dosages, instructions on taking the medication, the doctor’s name, and sometimes the patient’s name. The numbered prescriptions start with 8739 and end with 19448. There are no breaks in the numbering.

Volume VII: November 7, 1915–December 31, 1920
Spine reads: Prescriptions
Volume VII is similar to Volume VI, VIII, and VIX with handcopied prescriptions separated by date and numbered starting with 19449 and ending with 28800. Each prescription contains information on the prescription being filled, the dosage, instructions for taking the medication, the doctor’s name, the druggist’s initials, and sometimes the patient’s name.

Volume VIII: January 1, 1921–December 31, 1923
Pasted to the inside cover and the first page is a recipe for mixing prescriptions and a letter from the United States Treasury Department dated July 14th, 1922 about counterfeit prescription forms forged for prescription liquor. The letter is signed R. A. Haynes, Prohibition Commissioner and D. H. Blair, IRS Commissioner.
The rest of the volume is very similar to Volume VI and VII. The prescriptions are separated by date and numbered starting with 28801 and ending with 56923. Each prescription contains information on the prescription being filled, the dosage, instructions for taking the medication, the doctor’s name, the druggist’s initials, and sometimes the patient’s name.

Box VI: Patient names A–G (1958–1965)
(Earliest date filled is September 11, 1958)
Each card contains the patient’s name, their street address, or the town name if not Concord, the date on which the prescriptions were filled and the prescription number, which is sometimes accompanied by the drug name.

Box VII: Patient names H–N (1958–1965)
The prescription cards in this box have the same type of information as those in Box VI.

Box VIII: Patient names O–Z (1958–1965)
The prescription cards in this box have the same type of information as those in Box VI.

Folder I: Loose records from Volume I including account and creditor information, receipts, and calculations from the pharmacy, 1918–1919.

Loose records from Volume II including tax documents some relating to Jeremiah J. Erisman and scraps of paper with calculations, 1921–1928.

Folder II: Two loose items from Volume IV. One, a postcard from the Tuerk Hydraulic Power Co. addressed to J. T. Stetson of Concord, MA and the second a scrap piece of paper with some unidentified calculations. Both pieces of paper are not dated.

Loose items from Volume VI including calculations made on a small lined piece of notebook paper found between pages 200 and 201 and dated February 19, 1934 to April 2, 1934.