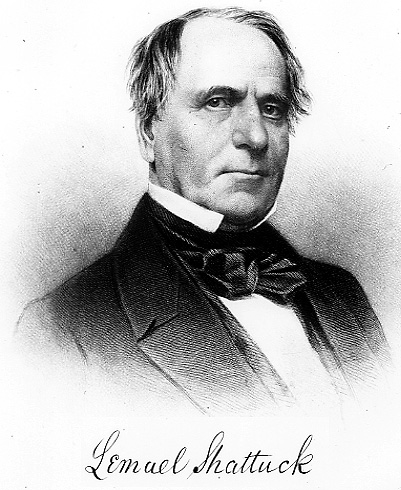 Organization and arrangement: Papers are filed in a single sequence (letters before draft and note material).

Biography:  Lemuel Shattuck was a social statistician, a genealogist, a public servant in Concord and Boston, Mass., a bookseller/publisher, and the author of the first full-scale history of Concord.  He was born in Ashby, Mass. on October 15, 1793 and died in Boston January 17, 1859.  In 1823, he entered into partnership with his brother Daniel, a Concord storekeeper.  As a member of Concord’s School Committee, he reorganized the town schools.  In 1830, he prepared Concord’s first annual school report, which led to the 1838 passage of state legislation requiring such reports.  Shattuck also wrote pieces about Concord history for the local Yeoman’s Gazette, culminating in the publication of his History of the Town of Concord in 1835.  While compiling information about Concord, Shattuck became aware of the importance of vital records.  He moved to Cambridge in 1834, to Boston two years later, and served as a member of the Boston City Council (1837-1841) and the state legislature.  He worked toward the 1842 passage of Massachusetts law to improve the keeping of birth, marriage, and death records, superintended census-taking in Boston in 1845, and consulted in the preparation of the 1850 federal census.  In 1849, Shattuck chaired a commission to prepare a Massachusetts sanitary survey.  He wrote the commission’s 1850 report, which was influential in the eventual creation of the Massachusetts State Board of Health.  His Memorials of the Descendants of William Shattuck was published in 1855.  Lemuel Shattuck was a Mason, a member of the Social Circle in Concord and the Massachusetts Historical Society, and a founding member of the American Statistical Association and the New England Historic Genealogical Society.  The Lemuel Shattuck Hospital in Jamaica Plain was named for him.

Scope and content:  Papers, 1829-1855, consisting of: two ALS (Lemuel Shattuck to Sampson Mason, 1829 January 31, regarding meeting of Bible Society at Middlesex Hotel in Concord; Lemuel Shattuck to his brother [Daniel], 1855 June 3, regarding family register to be included in Memorials of the Descendants of William Shattuck); draft genealogical portions and notes compiled in preparation of History of the Town of Concord, [ca. 1830-1835].

Provenance:  Partially established.  Draft portions of and notes for History of the Town of Concord presented to the Concord Antiquarian Society by Miriam S. Shattuck (a daughter of Lemuel) in 1894.

Sources of acquisition:  Partially established.  Draft portions of and notes for History of the Town of Concord deposited by Concord Antiquarian Society in 1971, converted to gift in 1974.

Notes and comments:  Under CAS ownership, draft portions of and notes for History of the Town of Concord were numbered CAS D-1163. Letter to Sampson Mason transferred from CFPL Letter Files, March 1995 (formerly Letter File 6, S8).

Folder 2:
Drafts genealogical portions of and notes for Shattuck’s History of the Town of Concord.