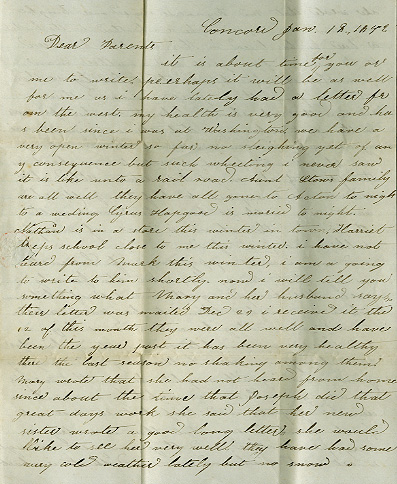 ORGANIZATION AND ARRANGEMENT: Organized in a single file, arranged chronologically.

Lucy, Ward Duren, and Mark Safford were sometime residents of Concord, Massachusetts.  Ward—who shows up in multiple volumes of Concord assessors’ records—apparently lived and worked in Concord the longest.  Their brother John lived and worked in Boston.  Based on the collection, Ward can be placed in Concord between 1828 and 1844, Lucy in the late 1820s and early 1830s, Mark in 1840.  Ward Safford returned to his native town after his father’s death.  Ward and Mark Safford died in Washington, New Hampshire, Lucy in Haverhill, New Hampshire.

SCOPE AND CONTENT: Seventeen letters, 1815-1844, by members of the Safford family and their Barrett relatives in Concord, Massachusetts, primarily to kin in Washington, New Hampshire.  (One letter was written by Lucy Safford in Concord to her brother John in Boston.)  Letter-writers include Rebecca and Louisa Barrett to their “Dear Sister” (Mercy Barrett Safford) and Lucy, Ward, and Mark Safford to their parents and siblings.  Most of the letters were written by Ward Safford.  Some letters contain messages by multiple correspondents.  Subjects covered consist largely of family news, health, weather, crops, and other quotidian matters, with a few notable exceptions (see container list, below).

Folder 2:
Letters, 1835-1844 (9 items).
Highlights: On April 7, 1836, Ward Safford writes his parents of the uncommonly severe April weather and tells his parents he wishes he could be home to assist in sugar-making and -eating.  On October 16, 1836, he comments on his luck in not having “a wife and ten or twelve caterwalls” in tough times, with winter approaching.  On April 5, 1840, Mark Safford tells his parents that he is working at Deacon [Reuben] Brown’s, comments that he thinks he can make better money elsewhere, and reports on a visit to Lowell to look for factory work. In a letter of December 28, 1843, Ward Safford writes about the laying of the Fitchburg Railroad tracks toward Concord and of Irish “slavery” in the railroad’s construction, and on October 27, 1844, expresses his thoughts about the setting off of his mother’s “widow’s thirds.”