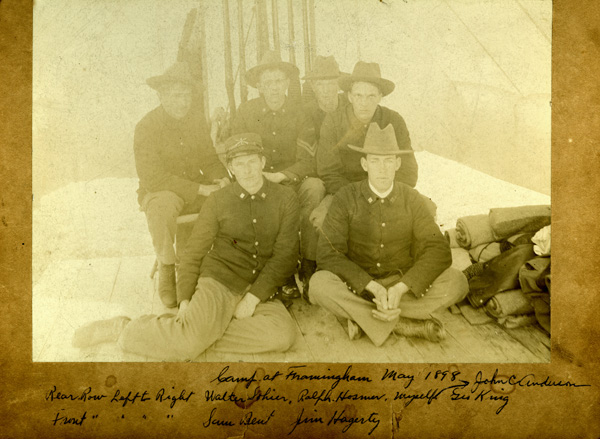 When war was declared by Congress on April 25th, President William McKinley immediately called for volunteers. Most Concord men went out with Company I of the 6th Regiment, known as “the Concord Company.” At first, almost to a man, every qualified male in town enlisted before it was decided that married men should be excused from service. The final roster totaled 106 men and three officers, 45 of the men and one of the officers were Concordians, and included six or seven young men who, though still in high school, were allowed to enlist. 16 additional Concord men served with other organizations to which they were already attached.

Company I of the 6th Regiment, under Captain Cyrus H. Cook, was sent to train at the Muster Grounds in Framingham, Massachusetts before leaving on May 20th for Camp Alger, Virginia. Following that they transferred to Charleston, South Carolina where they boarded the S.S. Yale, arriving in Santiago on July 11th. The city surrendered within days and the Yale, with its crew of men and officers, was sent to Puerto Rico where they landed at Guanica on July 25th and dealt with a token resistance by the Spanish forces.  On August 12th a protocol was signed, bringing the 113 day war to an end.

Illness and death from tropical diseases such as typhoid fever and malaria was a major problem for American troops, as was hunger in a number of the camps. The war over, Company I was relieved and returned to Boston. They returned to a rousing Concord welcome on October 27th.

SOURCE OF ACQUISITION: Donated by Sherry Dee Mobley, May 2014.

NOTES: Several of the newspaper clippings address Sherman Hoar’s (1860-1898) civilian work during the conflict and subsequent death. Additional information about Sherman Hoar is available in the obituary scrapbooks located in Special Collections.

Series I: Rosters, reunion programs and photographs, 1898-1948 and undated

Document: “Pen used by all, excepting Captain Cook (who was in Boston) and Sergeant Ford  signing in triplicate the first N.S. payrolls of this company”. Signed by Jos. S. Hunt., undated.