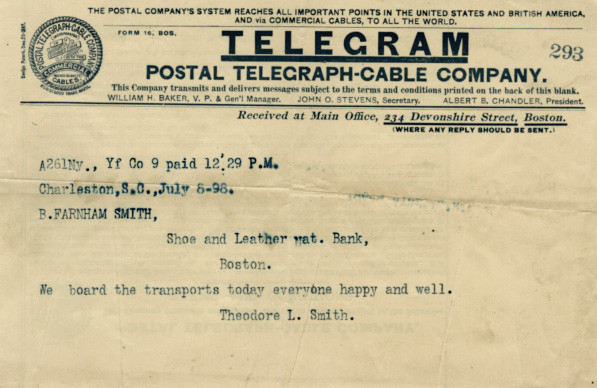 BIOGRAPHY:  Theodore L. Smith, the son of Henry Francis and Hannah (Lincoln) Smith, was born in Concord in 1877. A graduate of Concord High School and the Massachusetts Institute of Technology, he served in Puerto Rico during the Spanish-American War in 1898. Most of his work life was spent with the Gillette Safety Razor Company. Together he and his wife Alice Louise (Gage) Smith had two sons and a daughter. In Concord, he was the Commander of the Concord Independent Battery, as well as the author of a history of the militia group. He served for nine years on the Road Commission, including one term as chairman. After his war service he began spending time in the Maine woods, eventually buying property there and becoming a licensed Maine Guide. A lifelong Concordian, he died in 1949 in the Main Street house where he had been born. The scrapbook and associated materials were donated to the Concord Free Public Library by his eldest son, Stephen Lincoln Smith.

When war was declared by Congress on April 25th, President William McKinley immediately called for volunteers. Most Concord men went out with Company I of the 6th Regiment, known as the “Concord Company.” At first, almost to a man, every qualified male in town enlisted before it was decided that married men should be excused from service. The final roster totaled 106 men and three officers, 45 of the men and one of the officers were Concordians, and included six or seven young men who, though still in high school, were allowed to enlist. 16 additional Concord men served with other organizations to which they were already attached.

Company I of the 6th Regiment, under Captain Cyrus H. Cook, was sent to train at the Muster Grounds in Framingham, Massachusetts before leaving on May 20th for Camp Alger, Virginia. Following that they transferred to Charleston, South Carolina where they boarded the U.S.S. Yale, arriving in Santiago on July 11th. The city surrendered within days and the Yale, with its crew of enlisted men and officers, was sent to Puerto Rico where they landed at Guanica on July 25th and dealt with a token resistance by the Spanish forces.  On August 12th a protocol was signed, bringing the 113 day war to an end.

Illness and death from tropical diseases such as typhoid fever and malaria was a major problem for American troops, as was hunger in a number of the camps.

SCOPE & CONTENT: The scrapbook contains newsclippings (1898-1899), largely related to Concord and Company I, 6th Regiment M.V.M.; the collection also contains a letter from Theodore L. Smith to his father, Henry Francis Smith, 23 June 1898, a telegram from Theodore L. Smith to his brother, B. Farnham Smith, 8 July 1898; a pamphlet: Reception of Sixth Massachusetts Regiment in Baltimore, Maryland on its way to the front, May 21, 1898; photographs include three images taken in Ponce (undated) and a photograph of Sherman Hoar (March 1897).

Scrapbook, 1898-1899, (compiler unknown) consisting of articles and images clipped from a variety of newspapers, with an emphasis on Concord’s soldiers who were members of Company I, 6th Regiment MVM. (Includes photographs and obituaries for Carl Hart and Ralph Prescott Hosmer, two of three fallen Concord soldiers).