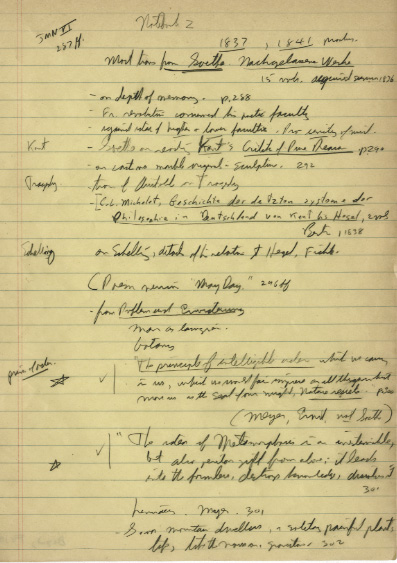 Organization and arrangement:  Organized into three series: Series I. Material relating to Richardson’s Henry Thoreau: A Life of the Mind, ca. 1975- 1995; Series II.  Materials relating to Richardson’s Emerson: The Mind on Fire, ca. 1985-1995; Series III. Papers relating to teaching career, 1969-1987.  Series I and II are each divided into subseries (see series/subseries listing, below).  Arrangement within subseries varies (see scope and content note for more detail).

By and large, the organization and arrangement of the collection reflect the donor’s filing practices.

Biography:  Academic and author Robert Dale Richardson, Jr., was born in Milwaukee, Wisconsin, in 1934.  He was raised in Medford and Concord, Massachusetts.  (His father and namesake was a Unitarian minister, who in 1956-1957 served as interim pastor at the First Parish in Concord.)

Robert Richardson died on June 16, 2020, in Hyannis, Massachusetts at the age of 86. He is survived by his wife, author Annie Dillard.

Scope and content:  An organic collection of papers consisting primarily of material gathered or generated during the preparation of Robert Richardson’s intellectual biographies of Thoreau and Emerson and of materials relating to his teaching career.  The date spans of major components of this collection as presented in this finding aid reflect the time periods during which material was gathered rather than generated.  For instance, Subseries I.B, “Thoreau files,” is dated ca. 1975-1995 because Richardson collected the material in the files roughly over that span of time.  However, the actual publication dates for photocopied material in the subseries are 1679-1995.

Series I consists of material relating to Richardson’s Henry Thoreau: A Life of the Mind, generated or gathered between about 1975 and 1995.  Subseries I.A contains correspondence, filed mainly alphabetically.  Subseries I.B holds an extensive quantity of source material—much of it photocopied, some in original form—consulted by Richardson in writing the book.  This material is arranged in a single file by author or (occasionally) by subject (as determined by Robert Richardson).  Many items in Subseries I.B include annotations in Richardson’s hand.  Subseries I.C includes the contents of several Thoreau notebooks maintained by Richardson, removed from their binders but with the order in which he kept them retained.  These notebooks are made up largely of manuscript notes in Richardson’s hand, with some photocopied published material included; one of them consists of Richardson’s manuscript index to his Thoreau files.

Series II consists of material relating to Richardson’s Emerson: The Mind on Fire, gathered between about 1985 and 1995.  Subseries II.A holds the contents of Richardson’s Emerson-related notebooks (as with his Thoreau notebooks, the contents removed from the binders), with the compiler’s ordering of contents retained.  These, too, consist primarily of Richardson’s manuscript notes but also include some photocopied published material.  One notebook contains items relating to the photographs used to illustrate Emerson: The Mind on Fire (a completed art inventory form; list of photo captions; invoices and correspondence; photocopies of images; manuscript notes; and some photocopied published and typescript material). Subseries II.B includes the copy images obtained from several repositories for reproduction in the book, some original photographs from the author’s collection, and some photocopy from published sources, all in the order in which they arrived at the Concord Free Public Library.

Series III contains material (1969-1987, plus much undated) relating to Richardson’s teaching career, consisting of mimeographed and photocopied typescript reading lists for students, manuscript notes in Richardson’s hand, syllabi, and examinations.  No attempt has been made to impose order—chronological or other—on this series.

Source of acquisition:  The gift of Robert Dale Richardson, Jr., 2014. 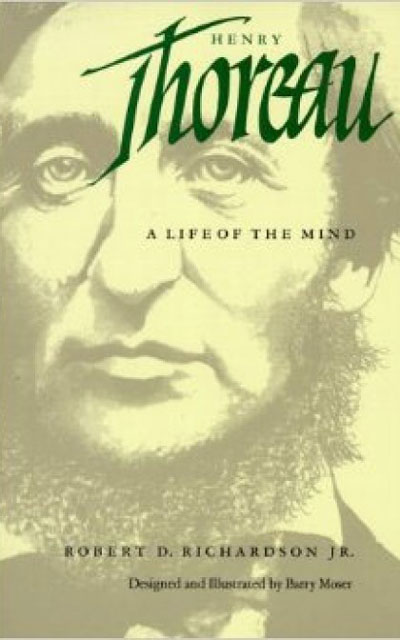 [Alcott, Louisa May] Myerson, Joel, and Daniel Shealy.  “Louisa May Alcott’s ‘A Wail’: An Unrecorded Satire of the Concord Authors.” Photocopy of article in The Papers of the Bibliographical Society of America, vol. 80, no. 1, 1986, pp. 93-99.

[About correspondence of Lewis G. Wilson and Adin Ballou with Leo Tolstoy on non-resistance] Carpenter, Frederic I.  “A Letter from Tolstoy.”  Photocopy of article in The New England Quarterly, vol. 4, no. 4, 1931, pp. 777-780.

Bunsen, Christian Charles Josias. Christianity and Mankind, Their Beginnings and Prospects . . . In Seven Volumes.  First Volume.  Historical Section . . . Vol. I.  Hippolytus and the Teachers of the Apostolical Age (London: London, Brown, Green, and Longmans, 1854).  Photocopy of title-page only.

Bunsen, Christian Charles Josias.  Hippolytus and His Age; or, The Beginnings and Prospects of Christianity . . . Second Edition.  In Two Volumes.  Vol. I.  Hippolytus and the Teachers of the Apostolical Age (London: Longman, Brown, Green, and Longmans, 1854).  Photocopy of pp. -xlvii.

[Calendar of Thoreau correspondence] Carolyn Kappes, Walter Harding, Randy F. Nelson, and Elizabeth Witherell.  “A Calendar of the Correspondence of Henry D. Thoreau.”  Offprint of article in Studies in the American Renaissance, 1982, pp. 325-399.

Clarkson, John W., Jr.  “Mentions of Emerson and Thoreau in the Letters of Franklin Benjamin Sanborn.”  Article clipped from Studies in the American Renasissance, 1978, pp. 387-420.

Emerson, George B.  A Report on the Trees and Shrubs Growing Naturally in the Forests of Massachusetts . . . Vol. I . . . Third Edition (Boston: Little, Brown, and Company, 1878).  Photocopy of pp. 73-79 and accompanying plates.

“John Evelyn.” One page of manuscript notes in the hand of Robert D. Richardson, Jr., undated.

Garrison, William Lloyd. William Lloyd Garrison on Non-Resistance.  Together with a Personal Sketch by His Daughter, Fanny Garrison Villard and a Tribute by Leo Tolstoi (New York: The Nation Press Printing Co., Inc., 1924).  Photocopy of pp. [22]-55.

“Garrison.”  One sheet of manuscript notes in the hand of Robert D. Richardson, Jr., undated.

“Gilpin, Wm.  A [sic] Essay on Prints.”  One page of manuscript notes in the hand of Robert D. Richardson, Jr., undated.

Gross, Robert A.  “The Worlds of Emerson, Dickinson, and Thoreau.”  Typescript of talk delivered to the Amherst Historical Society, May 31, 1978.

Hoagland, Edward.  “Nature’s Seesaw: On the flux and balance of Vermont’s other residents.”  Photocopy of article in Vermont Magazine, May-June 1994, pp. 38-40.

Mayhew, Henry.  London Labour and the London Poor; Cyclopaedia of the Condition and Earnings of Those That Will Work, Those That Cannot Work, and Those That Will Not Work . . . Vol. I.  The London Street-Folk . . . (London: “Office, 16, Upper Wellington Street, Strand”; George Woodfall and Son, 1851.  Photocopy of front matter and pp. [1]-12, plus plates.

[Newspapers] Photocopy from Concord, Massachusetts, newspapers (Concord Freeman and Yeoman’s Gazette) for 1837, 1838 and 1841.

O’Callaghan, Edmund Bailey.  Jesuit Relations of Discoveries and Other Occurrences in Canada and the Northern and Western States of the Union.  1632-1672 . . . From the Proceedings of the New York Historical Society, Nov., 1847 (New York: Press of the Historical Society, 1847).  Photocopy of pp. [3]-22.

“Coventry Patmore.”  One page of manuscript notes, undated, in the hand of Robert D. Richardson, Jr.

Woolf, Virginia.  “Thoreau.”  Photocopied essay from Books and Portraits: Some further selections from the literary and biographical writings of Virginia Woolf.  Edited and with a Preface by Mary Lyon (New York: Harcourt Brace Jovanovich, 1978), pp. 72-79. 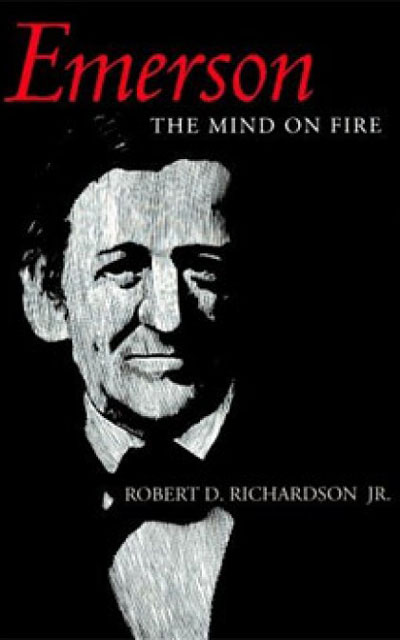 “Writings II: 1842 on.”  Manuscript notes in the hand of Robert D. Richardson, Jr., and one typed transcript.

“Emerson: Bibliographic Control.”  Manuscript notes in the hand of Robert D. Richardson, Jr., photocopied published and typescript material, and carbon copies of request forms for the examination of manuscripts at the Houghton Library, Harvard University.

Includes copy images obtained from various repositories, some original photographs from the author’s personal collection, and some photocopy from published sources. 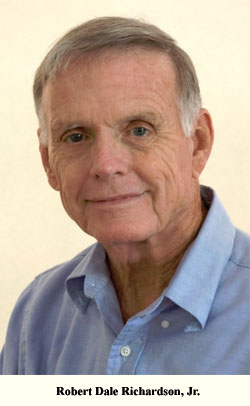 c2015. Images of book covers and of Dr. Richardson from his website (http://www.robertdrichardson.com/)