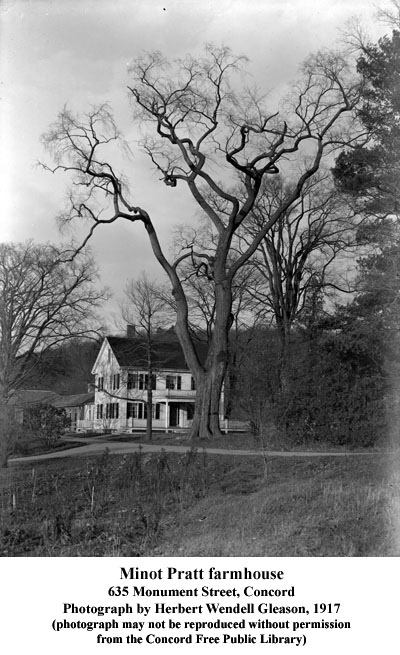 Organization and arrangement:  I. Manuscript Concord flora by Pratt, 1878; II. Pratt’s copy of Gray’s Manual of the Botany of the Northern United States, 1860; III. Pratt’s copy of On the Phenomena of Modern Spiritualism.  By William B. Hayden . . . (Boston: Otis Clapp, 1855).

Biography:  Born in Weymouth, Massachusetts, Minot Pratt (1805-1878) was a printer (he worked in the office of the Christian Register), an original member of the Brook Farm utopian community in West Roxbury, a farmer in Concord, and a botanist/horticulturist.  He married Maria Jones Bridge in 1829.  Their children: Frederick Gray (born 1831); John Bridge (1833); Caroline Hayden (1836); and Theodore Parker (1842).  (In 1860, John Pratt married Anna Alcott—daughter of Bronson and Abba Alcott and sister of author Louisa May Alcott.)

The Pratt family lived at Brook Farm from 1841 to 1845.  After their departure, they lived in Concord, on a farm on Punkatasset Hill—the present 635 Monument Street.  The annual summer picnic at their home was eagerly attended and fondly recalled by Concord neighbors and old Brook Farm friends alike.

Pratt was a member of the Concord Farmers’ Club, a progressive local group devoted to sharing information, encouraging experimentation with tools and techniques, and enlarging the working knowledge of the membership.  A friend and walking companion of Concord naturalist and author Henry David Thoreau, Pratt also developed expertise about the plants of Concord.  He introduced many plant species from other parts of the United States and prepared a flora of the native and introduced species of Concord, which in manuscript form is part of this collection.

Early Thoreauvian, naturalist, and photographer Alfred Winslow Hosmer (1851-1903) was familiar with and built upon Pratt’s earlier work with the plant life of Concord.

Scope and content:  Pratt’s manuscript flora of Concord, in his own hand, titled Plants of Concord.  Natural and Introduced.  Arranged by Minot Pratt.  Prepared for the Concord Free Library.  1878, his copy of On the Phenomena of Modern Spiritualism.  By William B. Hayden . . . (Boston: Otis Clapp, 1855),  and his copy of the “School and College Edition” of Asa Gray’s Manual of the Botany of the Northern United States.  Revised Edition . . . (New York: Ivison, Phinney & Co.; Chicago: S. C. Griggs & Co., 1860).

Provenance:  Pratt's copy of Gray's Botany was passed on after Pratt's death to Henry P. Richardson.  Helen Frances Adams was a later owner.  The volume was acquired by botanist Ray Angelo for the library of the Concord Field Station (a Harvard University research facility) and later removed with the Club’s collection to the Harvard Botany Libraries after the Field Station library was dispersed in the 1990s.

Sources of acquisition:  The manuscript flora was presented to the Concord Free Public Library in October 1878 by Frederick Gray Pratt for his father Minot Pratt, who had died in March of that year.  Gray’s Botany was transferred from the New England Botanical Club Library in the Harvard Botany Libraries by vote of the NEBC Council in October of 2013. Hayden’s Spiritualism was given by Minot Pratt to the about-to-open Concord Free Public Library in July 1873.

Pratt’s manuscript flora of Concord, in his own hand: Plants of Concord.  Natural and Introduced.  Arranged by Minot Pratt.  Prepared for the Concord Free Library.  1878.

The “School and College Edition” of Manual of the Botany of the Northern United States.  Revised Edition; Including Virginia, Kentucky, and All East of the Mississippi; Arranged According to the Natural System.  By Asa Gray . . . With Six Plates, Illustrating the Genera of Ferns, etc. (New York: Ivison, Phinney & Co.; Chicago: S. C. Griggs & Co., 1860).  The volume includes manuscript annotations in Pratt’s hand.  Inscribed in ink on a front lining leaf: “Henry P. Richardson / from / Minot Pratt April 3d 1878” (a gift received after Pratt’s death); inscribed in pencil on another front lining leaf: “Helen Frances Adams.”  Stamped on a front lining leaf and on the title-page of the Botany: “The Concord Field Station Library.”