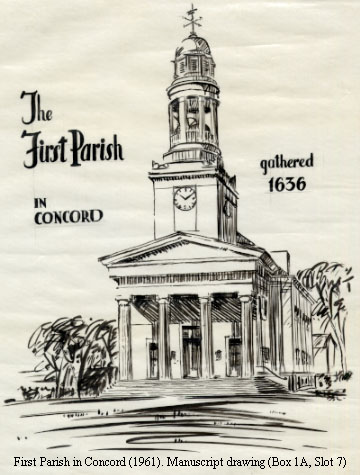 Notes/Comments:  Collection was developed by Special Collections staff. It contains many items that mesh with other CFPL collections, but are too large to accommodate with other archival materials.

Related Materials: These oversized maps and plans overlap with a number of organic collections of records and papers in the CFPL (for example, records of the First Parish Church, the Trinitarian Congregational Church, and the Concord Free Public Library). Consult finding aids on the CFPL website and staff of the Special Collections for more information.

Box 1, Slot 2:
Trinitarian Congregational Church plans (1925). Four sheets, including three photocopies of original plans; one of “the Galleries” two of the “Basement plans;” the final sheet is an original drawing of the first floor framing plans on a transparency sheet. Prepared by Frohman, Robb, and Little, Architects.

Box 1, Slot 4:
Trinitarian Congregational Church plans (1925-1930). Original plan of steeple; also plan of repairs to be made in the steeple. This work was completed in the spring of 1956. Frohman, Robb, and Little, Architects.

Box 1, Slot 5:
Trinitarian Congregational Church plans (1954). Three drawings signed by H. P. Aldrich and stamped by Frank Sewall Owen, Architect. Three drawings, including basement plans; first floor plans; and second floor plans. There is a note to Mr. Owen along with some notes written in pencil on the drawings.

Box 1, Slot 6:
Plan of Trinitarian Congregational Church (1954). This one sheet copy shows the elevation of the church. Survey by MacCarthy Engineering Service, Inc.

Box 1, Slot 11:
Trinitarian Congregational Church plans (1955). “Beetle Control Work,” including one blueprint containing measurements, one transparency drawing of the outside of the building, and one copy of the 1925 plan of the first floor with handwritten notes and measurements added.

Box 1A, Slot 1:
Trinitarian Congregational Church plans (1964). Proposed chapel addition by Frank Owen and Hugo Olson. Sixteen sheets include eight original manuscript drawings and eight copies of those drawings with some notes written on them.

Box 1A, Slot 4:
Trinitarian Congregational Church plans [undated]. Six drawings (three original manuscript plans and one copy of each). There are some handwritten notes on the copied pages.

Box 1A, Slot 8:
Plan of the land belonging to the Estate of Helen A. Blanchard (1921). One manuscript canvas drawing. Signed Leonard C. Robinson, Eng’r, Concord, Mass.

Box 2, Slot 8:
Rose Hawthorne Development (1978). Seven sheets, all copies of originals. Including one sheet map of the plan of the land, two sheets by E. M. Carlhian (phase 1 and phase 2), four sheets by Hammer, Kiefer and Todd, Architects and Planners.

Subseries B: Other site, facility, and event plans:

Box 3, Slot 5:
Plan for a monument at the battle ground on land given by Ezra Ripley (1835). Photostat from original manuscript.

Box 4, Slot 2:
Map of the Town of Concord (1942). Surveyed 1937 and 1941. Prepared for the Concord Planning Board for aerial photographs by the Institute of Geographical Exploration Harvard University. One sheet (paper).

Box 4, Slot 3:
Map of the Town of Concord (1942). Surveyed 1937 and 1941. Prepared for the Concord Planning Board for aerial photographs by the Institute of Geographical Exploration Harvard University. Wooded areas plotted by A. H. Hepburn in 1942. One sheet (canvas).

Box 4, Slot 4:
Map of the Town of Concord (1942). Surveyed 1937 and 1941. Prepared for the Concord Planning Board for aerial photographs by the Institute of Geographical Exploration Harvard University. One enlarged copy on paper .

Box 4, Slot 6:
Overlay maps of the Town of Concord (1958). Three color manuscript sheets include; one of the facilities, one of the waterlines, and one of the sewage system. Each is taped to cardboard, possibly for display use.

Box 4, Slot 8:
Redistricting (1994). One printed sheet, including some original manuscript, mapping out the polling places for the precincts of Concord.

Box 4, Slot 9:
Map of Concord [undated]. Manuscript map in the shape of the town’s outlines. Map in several pieces.

Box 4, Slot 10:
Flood Conservancy District Map [undated]. Map of the Town of Concord with some original manuscript and color coding of plan. Some water damage to bottom right corner of map.

Box 4, Slot 11:
Map of parts of Nashawtuc Farm and vicinity (1925). Showing lands conveyed by William Wheeler to Berkeley Wheeler by deed of May 20, 1925. Two sheets include one canvas drawing and one in black ink on paper in actual shape of area. An accompanying photocopy map of Nashawtuc from 1976.

Box 5, Slot 1:
Proposed bridge over the Concord River (1839). One sheet, original watercolor sketch of bridge and its proposed dimensions.

Box 5, Slot 9:
Map of Massachusetts city lines [undated]. Photocopy of hand drawn map of town lines, including those of Concord.