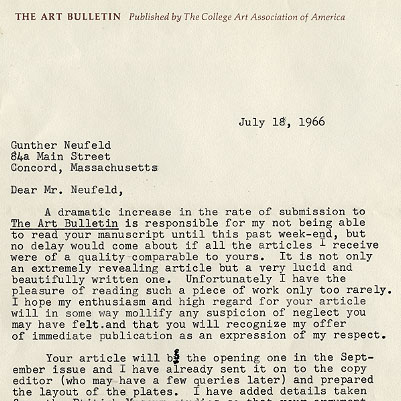 BIOGRAPHY: Gunther Neufeld, Ph.D., (1905-1979) was born in Berlin, Germany, and studied art history in Berlin, Hamburg, Florence, Brussels, and London. As a Jew in Nazi-occupied Europe, Neufeld fled, ultimately taking up residence in the United States. He became a professor at the Cambridge (Mass.) Junior College and lived for several years in Cambridge. He later settled in Concord with his wife, Rose, where they resided for over 20 years. The Neufelds lived in a cottage on the property of 276 Main St. An art historian, Neufeld was expert in the work of High Renaissance artists and conducted much of his research at the Fogg Art Museum at Harvard and the Museum of Fine Arts in Boston.  His critical works were published in a number of journals and art magazines, including the Art Bulletin. In most of his essays, Neufeld analyzed the evolution of the artist’s idea, from initial sketches to the completed work. He died in 1979.

The collection covers multiple topics and is comprised of notes, research materials, manuscripts, art visuals (original photos, negatives, or photocopies), published article reprints and correspondence. Some folders are more comprehensive than others. Few papers are dated, so the order of manuscripts is approximate, based on available information. Earlier manuscripts are often written in German. Most correspondence is professional in nature, between Neufeld and art magazine editors, art professors, or museum professionals.

SOURCE OF ACQUISITION: Neufeld’s papers were presented to the CFPL on April, 30 2010 by Pete Funkhauser.

Box 2, Folder 8:
“The Virgin with the Pear: A Note on Albrecht Dürer’s Engraving” (manuscripts, visuals); 1972